Carrie Lazarus, a news anchor on WSYR-TV (NewsChannel 9) and the host of Extraordinary People and Places of Central New York, has a new project to bring attention to young, local artists.

“I feel like the athletes get all the love around here, and very often the talented singers and musicians are only known within their schools,” Lazarus says. 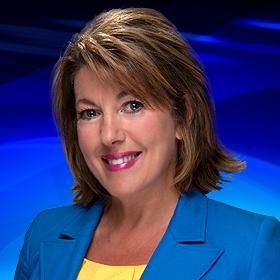 Extraordinary Live will take place at 3 p.m. Dec. 8 at the Landmark Theatre. Tickets are $10, and the money goes toward the Carrie Lazarus Fund for Extraordinary Talent.

Lazarus started the fund after hearing about Tevin Johnson, a senior at Manlius Pebble Hill School who taught himself to dance by watching So You Think You Can Dance. In summer 2012, Johnson auditioned for and was accepted into the competitive Summer Intensive Program at the school of the Alvin Ailey American Dance Theater, in New York City. But his parents could not afford to pay for his summer housing, so he had to pass up the opportunity.

“I was heartbroken for him,” Lazarus said. “He’s incredibly talented, but the answer is no because the money isn’t there. And if there’s one Tevin Johnson out there, there’s got to be more of them.”

So through her television show, her fund and now Extraordinary Live, Lazarus is working to help young artists explore their talents.

“I think if you have a gift, it’s part of who you are,” Lazarus says. “It’s not a hobby, it’s part of you, and you express yourself that way. It’s sort of like denying a child a part of their personality by not nurturing that.”

Johnson will perform two jazz pieces with his dance studio, Dance Theater of Syracuse. He said he can see himself dancing for the rest of his life.

“I was never sure what I wanted to do,” he says. “But when I got to middle school, I found dance. It was something that stuck with me. For me, it became something I could always go to.”

Lazarus plans to make Extraordinary Live an annual event, and she hopes this first performance raises enough money to start putting her fund to use. She said the money raised could go toward anything from music lessons to housing for people like Johnson, who have opportunities to take part in programs that require them to live away from home.

Johnson was accepted into the program again in summer 2013 and was able to attend. He plans to audition in April for a spot in the 2014 session. Even though he faces obstacles, he plans to keep working hard to do what he loves.

“When I did find the performing arts, it was just something I could visualize becoming,” Johnson said. “And that’s rare for a kid to see themselves doing something 20 or 30 years from now.”

To donate to the Carrie Lazarus Fund for Extraordinary Talent, visit www.cnycf.org. 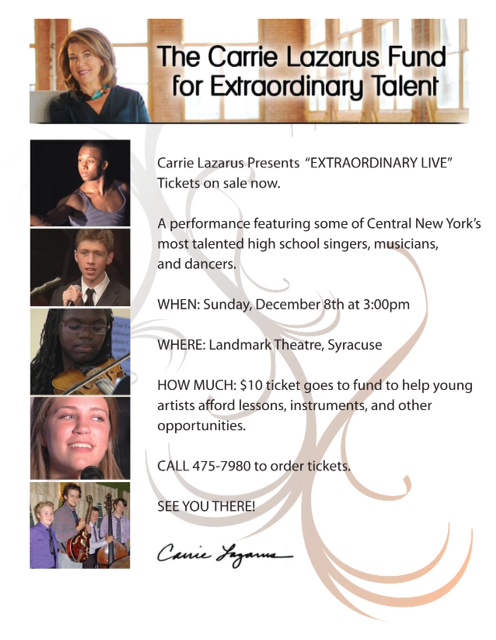