Maybe that early bye week for the Syracuse University football team wasn’t such a bad idea after all.

When the Orange’s schedule came out, many fans were upset that the first bye fell this week, between SU’s two weakest opponents, Villanova and Central Michigan. A team would prefer to have a bye in the middle of the season, before it faces a more formidable opponent. Instead, after this week’s bye, the Orange will play nine consecutive weeks – including back-to-back-to-back games against Notre Dame, Louisville and Florida State.

But this week’s bye is looking a lot better after the Orange opened its 125th season by narrowly avoiding one of the most embarrassing losses in program history. SU outlasted FCS member Villanova 27-26 in double overtime Aug. 29 only because Wildcats kicker Chris Gough shanked a 25-yard field goal attempt with 12 seconds remaining that would have given Villanova a 23-20 victory. 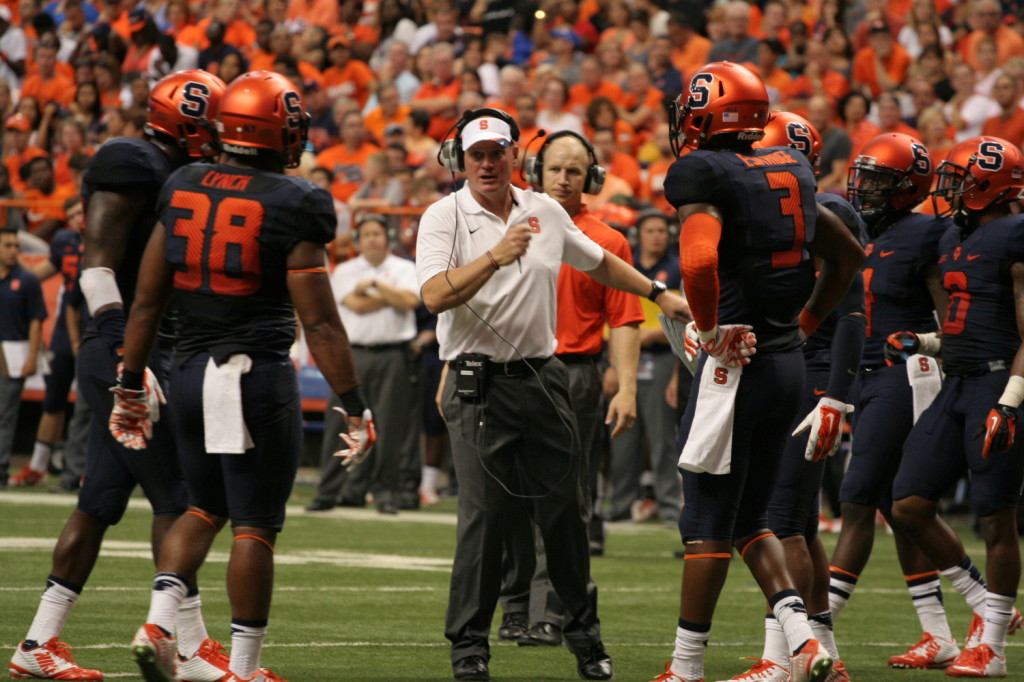 (Incidentally, FCS stands for Football Championship Series, formerly Division I-AA, and the Orange entered the Villanova game with a 30-game winning streak over FCS schools since 1958.)

That’s true, and there’s something to be said for that. But if the Orange wants to reach Shafer’s goal of eight victories this season, it’s going to have to play much better than it did against Villanova.

“I think anytime you have a bye week, you evaluate what you did up to that bye week, and obviously we have some things that we have to address and get corrected,” said George McDonald, SU’s offensive coordinator. “It’ll be a good time for us to get focused and get back to executing what we need to get done.”

Given the next nine weeks – at Central Michigan, Maryland, Notre Dame at Metlife Stadium, Louisville, Florida State, at Wake Forest, at Clemson, N.C. State and Duke – the Orange season could be determined by how the team re-boots during these next two weeks before the Central Michigan game Sept. 13.

“We need to come back and clean up everything we know,” Orange running back Prince-Tyson Gulley said. “We need to clean up and come back with a lot of intensity and hard work.” 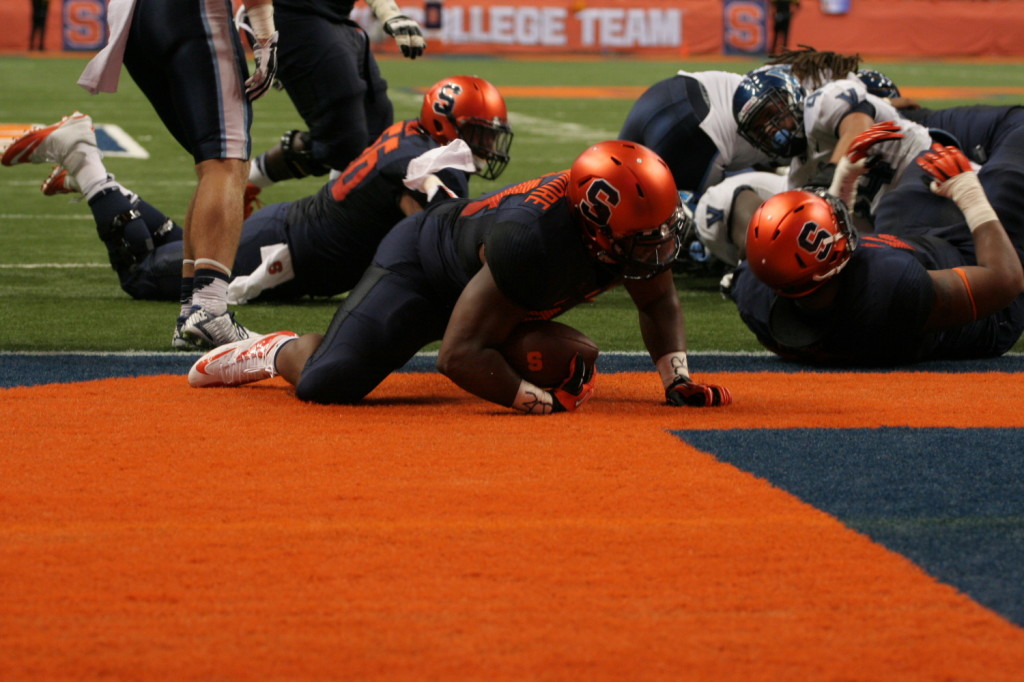 Based on the Villanova game, here are five things the Orange needs to clean up during the bye week:

Hunt is perhaps SU’s most indispensable player. While sophomore backup Austin Wilson held his own in the emergency role (11-for-17 for 89 yards and no interceptions), the Orange – and every team – needs its starting quarterback to stay calm and lead, not lose his composure.

“He needs to get back to the huddle and play the next play,” McDonald said. “Those actions like that are not what we’re about and won’t be tolerated.”

Publicly, at least, Shafer chalked up Hunt’s ejection to the heat of the moment and the NCAA looking to police the scrums that sometimes occur when a play ends. Shafer said Hunt will not receive further punishment from the team.

2. Offensive line. The Orange gained 190 yards on the ground (65 on Gulley’s touchdown run in the first quarter), and neither Hunt nor Wilson was sacked.

Still, the line too often didn’t get the push it needed against Villanova’s undersized defensive line, most glaringly in the second overtime when the Orange had first-and-goal from the 2-yard line and couldn’t punch it in with 246-pound running back Adonis Ameen-Moore running behind 6-foot-6, 306-pound left tackle and NFL prospect Sean Hickey.

“Our M.O. is we run the football and we should be able to get it in,” McDonald said. “We’ll go back and look at it and see what happened, see what errors there were.”

3. Defensive line. Last year, Syracuse was the only FBS team in the nation to not allow a 100-yard rusher. Villanova quarterback John Robertson, who completed 16-of-27 passes for 199 yards and a touchdown, also rushed for 115 yards on 34 carries. The Wildcats converted 12-of-20 on third down and held the ball for more than 15 minutes longer than SU (37:48 to 22:12).

The SU defensive line did record four sacks and came up big on the last play, when end Robert Welsh stuffed Robertson’s keeper on a two-point attempt that would have won the game for the Wildcats. But against FBS opponents, the line will have to do a better job controlling the line of scrimmage.

“(Robertson) was awesome today. He’s similar to South Florida’s old quarterback, B.J. Daniels. Big ups to him,” SU linebacker Cameron Lynch said. “Now what we have to do, as a team and as a defense, is go back to the drawing board and get better.”

4. Special teams. Yes, after failing to punch the ball in from the goal line, SU won the game on a trick special teams play as punter and Christian Brothers Academy alumnus Riley Dixon, the holder for field goals and extra points, tossed a 1-yard touchdown pass to tight end Kendall Moore to give the Orange a 27-20 lead in the second OT.

“I felt a lot of momentum swing after that play,” Livers said.

It would have been the play of the game if Gough had made the field goal at the end of regulation.

5. Play better at the Dome. SU’s new Nike Pro Combat uniforms have the words “Lock the Gate” inside the neck of the home jersey as a reminder of the importance of winning at the Carrier Dome (they also have “D.I.S.C.I.P.L.I.N.E.” inside the back of the neck, but we’ve already addressed that). The Orange has five games remaining at the Dome, and they’ll have to play better than they did against Villanova to win any of the five.

“I’d rather be upset and be 1-0 than be upset and be 0-1,” McDonald said. “But we do have a lot more that we can do in terms of executing and stuff like that, and we’ll do that during the bye week and we’ll continue to grow and continue to try to achieve our goals.”
Up Next for SU: at Central Michigan (1-0), noon Saturday, Sept. 13, at Kelly/Shorts Stadium, Mt. Pleasant, Mich. (TV: ESPNU/ESPN News).

Why Can’t Save 81 Just Tell the Truth?
Southside Youth March to Stop Violence
To Top