The Central New York Playhouse’s area premiere of Evil Dead: The Musical arrives with a number of firsts. For starters, it’s the first show to have its own designated “splatter zone,” with seats tightly lined up together near the stage.

Fans of director Sam Raimi’s 1983 zombie horror movie, made for a pittance but earning millions, will know why they called ahead to reserve those seats. Ticket sales have already set a company record, but anyone wandering in out of curiosity will get the drift when a severed head doesn’t get cheated out of any dialogue.

The original movie bristled with ironic dark humor, but when those lines are repeated on stage they sound like a spoof. Five Michigan State University students want to party in the boonies, without paying rent. One even bellows, “What could possibly happen if we break into an empty cabin in the woods?” There’s a Rocky Horror Picture Show quality to Evil Dead that makes the audience want to shout back, “Everything!”

The 18-song musical version, created in Canada 11 years ago by a quartet led by George Reinblatt, moves the action even faster than the film. The students’ leader, Ash (Eric Feldstein), has brought along his cuddly girlfriend, Linda (Kasey Marie McHale), his stuffed-toy toting sister, Cheryl (Hanna Zehner), as well his sex-crazed pals, Scott (Liam Fitzpatrick) and bosomy Shelly (Korrie Taylor). Trouble begins when Ash and Scott go through a trapdoor, triggering a broadcast reading of the Sumerian Book of the Dead. Navroz Dabu’s loose-latticed set allows us to see what’s going on in the cellar. 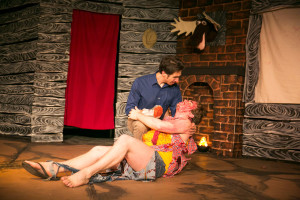 In Evil Dead the students are tormented not just by a mere mad slasher, but the house and all of nature get into the act. A moose’s head on the wall (played by Jim Uva) gets a musical number, “Join Us,” along with the house spirits, who look like mobile tree trunks. Eventually Candarian demons join in the fray; their big number, “Do the Necronomicon,” is sure to please Rocky Horror fans.

Director Dan Rowlands, who guided a tribute version of The Breakfast Club, drives a gleeful pace, keeping the axes and chainsaws in constant motion. Music director Abel Searor, the hardest-working man in community theater, makes the music sound better than it is written, especially the soft-shoe “Bit-Part Demon,” sung by Jesse Navagh.