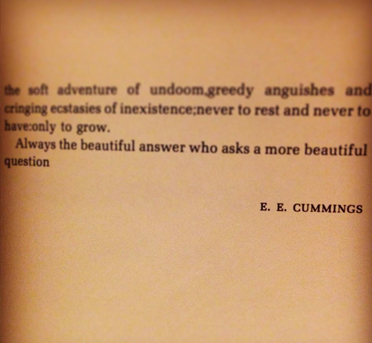 And she sits across with her beret, her femininity is uncovered.
Her lips sip her coffee with dignity.
And I, with my (s)mug — aerating with each exhale.
Wearing a scarf is pretentious, and I wish I had brought one; although, it’s not cold enough.
We both smile at each other when we both look down, away at the same time.

Although, he doesn’t speak well or coherently for that matter, his mumbling blares.
A stranger, he stands, although we share the implied adoration of coffee.
He pushes a practically empty shopping cart around, and I haul a bag of meaningless baggage in a laptop.
We don’t know each other, yet our glances successfully met once and our hands shook.
The kind soul points at me from a distance and waves, smiling the entire time; my arm raises, a smile broadens, and my hand replies with a wave.

Do you have an interest in one of these two women, because the one seems to be flirting? — She asks.
I reply — I have no idea who they are, and I just met them tonight — kind of — so I don’t know them, but maybe.
[Insinuating that one’s cute] It’s fun to think of the possibility of something developing for story purposes. — She states.
I return — I mean, it’s hard to deny and it’s impossible to ignore going into any situation without considering the potential chance of possibility.

One situation of shoulders shrugging paired with a tilted smirk (before) parallels another’s eye’s looking up pulled by a lifting brow (after).

Regardless of my encouraging him to enjoy the nice weather, he just stares at me and goes nowhere.
He looks at me with watery eyes when I place a good meal in front of his face.
No matter when I try to capture his joy, his content, or his worry: he ignores the camera.
He yells at me at 4 A.M.
But without fail: the cat just purrs, and he licks his butt hole.

And Joe parked on Hawley Ave. to prove a point: the walkable City of Syracuse.
Because people in New York City do it all the time: walk.
And — after the OnCenter event — I felt lazy walking to my car on Jefferson.

And during last night’s autumn in the rain, lamplight addressed empty streets.
There is no need for an umbrella when coaxing raindrops keeps their promise to do you no harm and wake you up.

She studies life through a square frame, holding it up to the light; it’s as if she breaks the fourth wall with inquisitive eyes.
The image is indescribable as it’s washed out by the reflection of bulbs.
She blinks slowly as her curious eyes are transfixed as the world speedily unwinds around her.
Her affected thoughts caress that moment as confident pinprick-sized vapor droplets that have jumped from a quivering lip.
[The empty mug sits on the table, displaying latte layers, but presents itself as empty.]
The joy cascades slowly from her face; her hands retract into her sleeves, and her fingers grip the cuffs; and she looks back at the brick wall.

Free Will Astrology
The Spinning Boomerang UFO
To Top