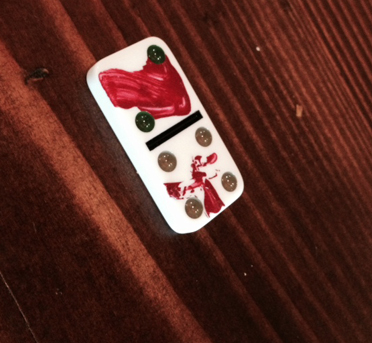 He handed me a domino splattered and brushed with red paint.

The Cafe at 407 / Ophelia’s Place is probably one of the places in Central New York  that I don’t venture to as much as I should. The non-profit helps create awareness and strength, restores confidence, and helps rekindle that flame that burns in all of us, our families, our friends, and within our communities. And ourselves; lets not forget that. It’s not in a selfish sense, but self confidence is a good thing, and sometimes reminders are needed to rekindle that fire. Living with passion helps with personal growth that has the potential to spread.

Plus, 407 is a locally-focused cafe in terms of food and art and music, which all culminates to that ideal local mentality.

This past Wednesday, September 30, was a beautiful day, yet work had to be done; that can’t really happen without a laptop with a dysfunctional battery. If you give a laptop a battery with a short life, you need an outlet. The situation that is yielded leaves you whimpering like a pup staring out a window at birds. And then that person sitting within an earshot shoots you an odd look and maintains eye contact as they move their things to another table, which is across the way.

Fulfilling one of the stereotypes of coffee shop dwellers, the armchair by the fireplace was nestled in. My phone was placed face-down on the table, and the mug of coffee was rested atop of it. Moments before, while ordering the caffeine-laced ambrosia, it was a tough decision to pass over the baked goods in the case. The woman behind the counter saw me eyeballing the donuts, which I vocally addressed the situation as always impossible to resist. The woman behind the counter revealed herself to be the baker. At that moment, my eyes closed in lieu of having to face-palm myself. In a brief daydream segue: The patrons and other workers stopped what they were doing and applauded at my error.

But the coffee satisfied me greatly, and the book put my mind at ease whilst giving my eyes a rest.

And then – Dale, if I remember his name correctly – swiftly walked over to me. As if I had known him for a while, I stood up and greeted him. He smiled, looked at me kindly, and shook my hand. He said he saw me and pegged me as an artistic type. I told him he was good. He handed me a domino splattered and brushed with red paint. I was donning a light red hoodie at that moment. He figured I liked red, which is true; the warning color is a literary gold mine to analyze.

Dale told me to take it, and I was ready to give him a couple bucks for donation, but he didn’t ask for or take anything. He simply gave me the piece. And that was that.

(One half has two dots, and the other holds four. A pair versus two pairs. Six dots – three pairs or two pairs of three. Numbers … bane of my existence.)

Perhaps the scenario is another one of those messages, one of those moments that is supposed to symbolize some aspect of life to be listened to and lesson to be heeded.

It’s simply one of those kind gestures that makes the world keep turning forward.