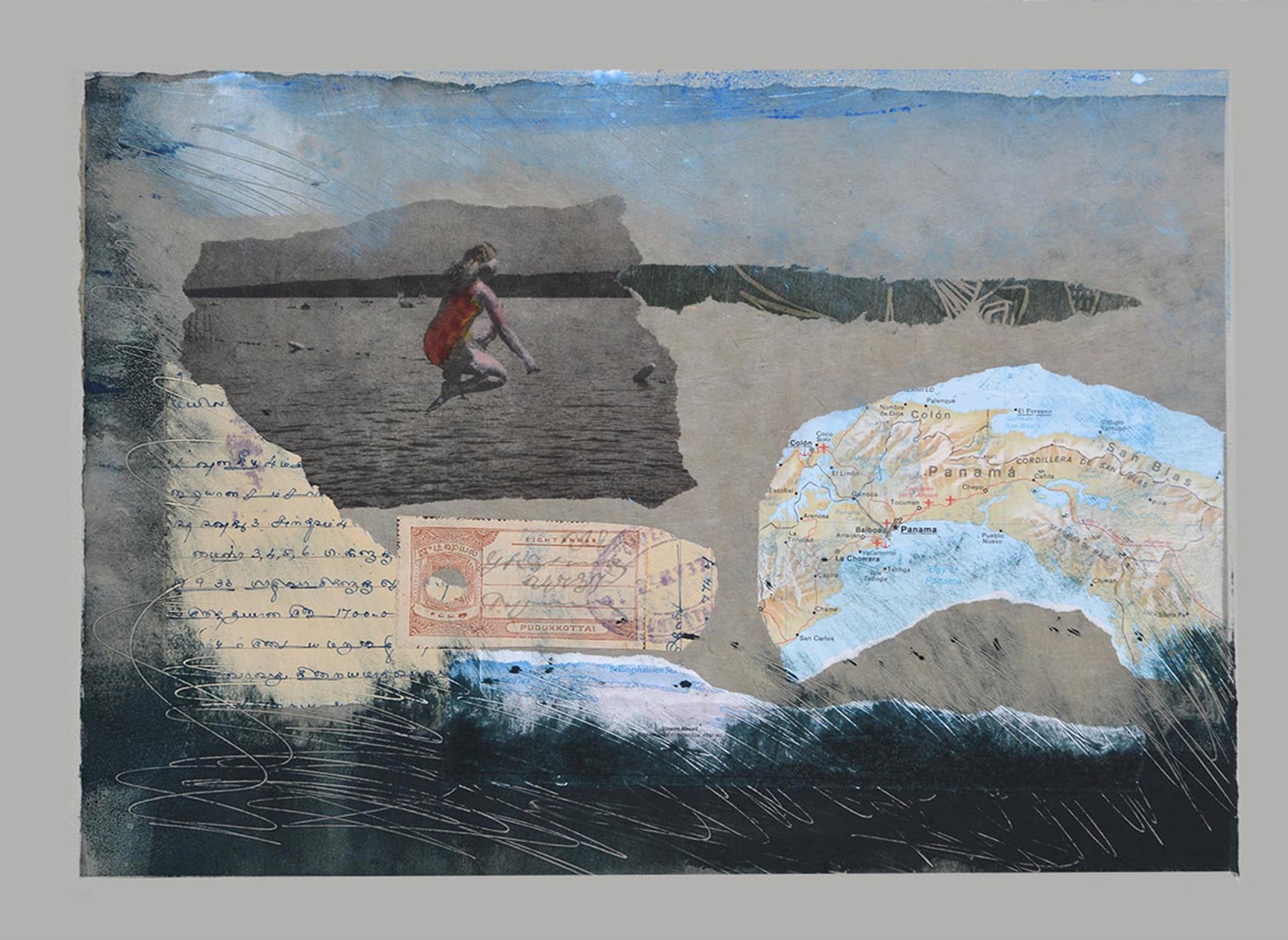 Now at the Edgewood Gallery, Foolings Awakening is an extensive show with a roster of five artists and an array of works including assemblages, collages and mixed-media jewelry. Many of the pieces are small but compelling as they explore memories and the process of remembering.

Dan Bacich has a bunch of his assemblages on display. These are small boxes containing found objects that communicate very well. In “American Express,” the remains of a chopped-up credit card mix with a gold figure. The “Soda Jerk” combines a toy figure twirling a lasso with signage for Coke and Sprite.

Other pieces demonstrate the artist’s versatility. “Lot’s Wife” operates with minimal items: a tiny bowl and metal figure. “Pirate Jenny” doesn’t have cutlasses or muskets or other items associated with pirates. Instead, two sails flank a woman. Like many of Bacich’s pieces, it works on the basis of implication.

Alyson Markell’s monoprints, some of the larger artworks in the exhibition, reference summertime and the notion of an era that’s passed. One of her best pieces, “Summer at the Lake,” has several elements: an image of a young woman at the beach, blue water, a fragment of a letter, and a section of a map.

Another Markell collage, “Virgin and Venus at the Lake,” merges imagery of a young woman and the Venus de Milo, text and blue color. In this and other works, there’s no sense of wanting to return to a simpler time. Rather, images like the one of teenagers on a raft serve as a jumping- off point for interpretation.

Brandon Hall has created collages that play with vintage imagery, that are whimsical and well-designed. “Condiment Revolution #57” encompasses red smears, tomato boxes, lettering for Heinz 57, and a man near mechanical works. In “Love Letter,” an astronaut holds a letter, and there are images of three planets, one with a woman atop it.

Look for pieces like “Sale at Galaxy Store” or “King of Trash Mountain.” The former includes a figure holding an umbrella and three grocery bags, with a bird atop one bag. The latter features, yes, a pile of trash and a man wearing a flimsy crown like those distributed at fast-food restaurants.

Inclusion of Steven Specht’s work expands the show’s discussion of collages. He creates pieces such as “Giving Polly the Finger,” which has nothing to do with a middle-finger salute. There are images of two children, one holding a finger. “Mars Preparation” incorporates images that first appeared decades ago, including spaceships, a man in shorts, and a man and a woman, each of whom holds a mechanical device. The visuals evoke science-fiction films from the 1950s.

Specht has several works with a surreal flavor. “Professor Dent” portrays a man in a suit whose head is covered by a gray form lined with teeth. “Brother Serendipity” is in a similar vein. There are two figures without heads; flowers fill in the spaces right above their necks.

Finally, Patti Yates McDermott has pendants and other beaded, wearable jewelry in the exhibition. She has indicated that she draws inspiration from many sources including music, poetry and beauty in nature.

Foolings Awakening displays many artworks, giving viewers an opportunity to compare the collages created by three artists and to enjoy the assemblages and jewelry. Because the show’s portfolio is quite different from other exhibitions, it takes a while to adjust to the format. The show is clearly worth that effort.