Mary Poppins, The Grateful Dead and a ballerina. These were just some of the themes that artists brought to life in the Sidewalk Art Contest on Saturday.

Mary Poppins, The Grateful Dead and a ballerina. These were just some of the themes that artists brought to life in the Syracuse New Times and Family Times Street Painting Contest on Saturday.

This year, 50+ people, ages 6 to 50, entered the contest that lined a stretch of Montgomery Street right near City Hall. Contestants were split into three categories: youth, ages 12 years and under, teens ages 13 to 17, and adults 18 years and older. Competitors were given from 9 a.m. to 3 p.m. to complete their square of the sidewalk.

This year was the fourth time John Landers, 49, competed. In previous years, he placed second, but winning has never been his object.

“I do this for the love of art,” Landers said.

He works as a maintenance man at the JPMorgan Chase Bank building on Fayette Street. He took one year of art in high school, and he described his method as being somewhat technical.

“I start with a photo and then put it on a grid,” Landers said. “I then add the detail.”

Landers drew a picture of his daughter preparing to dance. In the photo, she is leaning down to tie her ballet shoe. He took the photo and cut away the background and then applied it to a grid. Landers added shadowing and a yellow and red rose. He went as far as to estimate the time of day the judges would see his drawing and tried to align the shadow of the ballerina with that time. 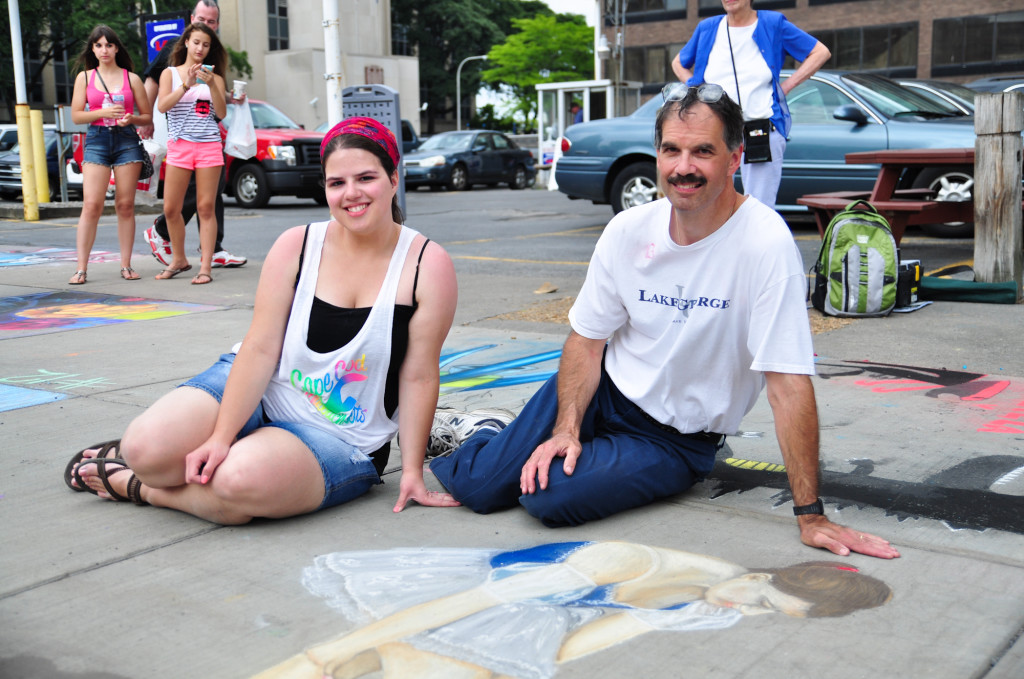 There were also sentimental touches.

“I drew the yellow rose for my daughter’s grandmother,” Landers said. “She loved her.”

Landers’s wife and daughter were both there supporting him throughout the day, whether he needed water or someone to make sure no one walked through his masterpiece before the judges could see.

Annastasia Ludington (pictured in feature photo) also had her family cheering her on. For Ludington, 15, art is about self-expression. It is also a way for her to cope with bullying. A friend introduced her to art, and every time Ludington felt down, she would paint or draw. Sometimes, she adds lyrics of songs that resonate with her. Once she completed each piece, she hung them on her wall.

“Whenever I’m really upset, I look at my old drawings, and I feel better,” Ludington said.

Now, she works on anti-bullying posters for her school.

“For me, it doesn’t matter what you look like or who you are,” Ludington said. “I just don’t like seeing people hurt.”

It was Ludington’s third time participating in the contest. Her theme this year was fantasy. At the suggestion of her brother, she decided to draw a wolf and dragon engaged in a battle in a misty moon-lit world.

Both Ludington and Landers won in their age groups, and both were elated and surprised.

“I really didn’t think I’d win,” Ludington said. “I was so shocked when they called my name.” 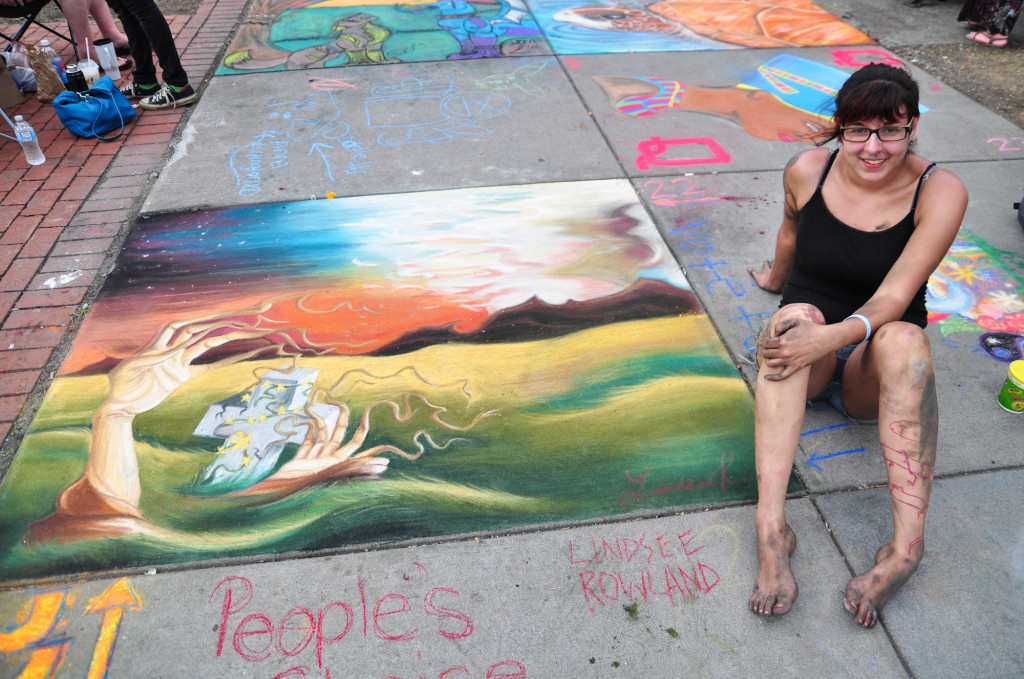 Other winners were Ava Dennis, 9, who drew an owl perched on a branch under a starry sky, and people’s choice Lindsee Rowland, who drew a cemetery at sunset with a hand-like tree stretching out towards a gravestone.

“I’m always sad when it’s over,” Landers said. “But now, the planning begins for next year.”

The contest is in its 24th year and is sponsored by the Syracuse New Times. It began as a way to showcase local talent. Bill Brod, the publisher and owner of the New Times, thought that the competition becoming a part of ArtsWeek was a no-brainer.

“It made sense,” Brod said. “Arts, entertainment and dining is in the New Times DNA.”