The old saying goes “Diamond are a girl’s best friend” but the question is, what’s with the Diamond UFOs over New York?

The old saying goes “Diamond are a girl’s best friend” but the question is, what’s with the Diamond UFOs over New York?

It was a little after 9 p.m. on September 27th, 2014 Hank, a Buffalo, NY resident went outside for a cigarette. While gazing at the crystal clear southern sky he observed a diamond UFO traversing the sky.

“As I was watching the object slowly move from east to west, suddenly it stopped and appeared to hover. Then object’s five orange-ish tint lights dimmed briefly and the diamond UFO just winked out and wasn’t seen again.”

In another sighting on Long Island in the town of Commack, NY, a resident was watching television when he noticed a bright light out of his living room window. He tells us that he went outside to his porch to get a better look and saw a bright diamond UFO traveling from North to South.

While he was watching the object, he was stunned to see a second diamond UFO following the first one he had seen.

“Both of the objects stopped, seemed to hover then suddenly went straight up and out of sight. The whole sighting last perhaps four minutes”

Records prior to 1950 report virtually no diamond UFO sightings. The decades of the 60s, 70s, 80s, and 90s sport sighting levels with an average of about two sightings per decade. Around the year 2001, diamond UFO sightings suddenly spiked to eight and leveled off to a little under a dozen per year.

Then in 2009, diamond UFO sightings rose substantially; these UFOs began appearing in New York Skies at a rate of about a dozen a year, as evidenced by the following chart. 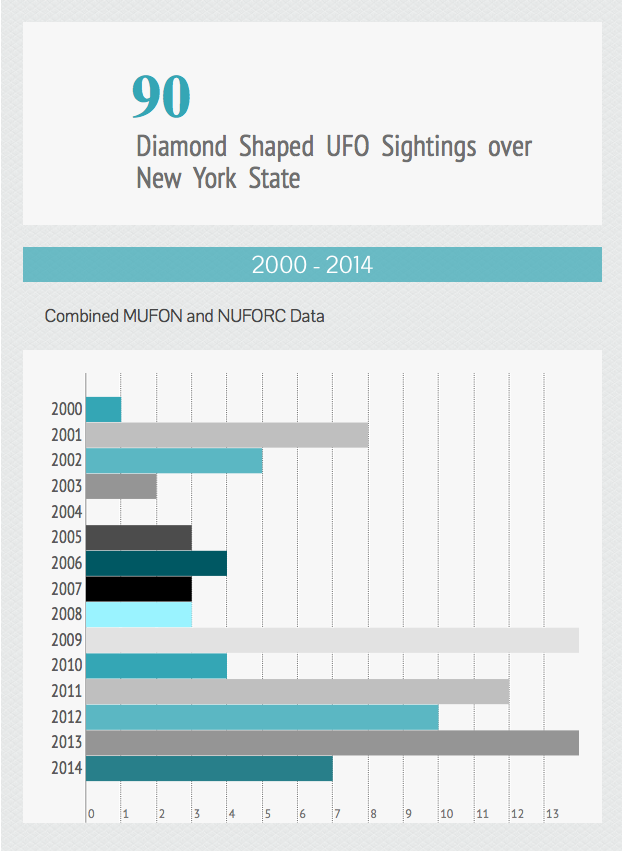 At first this reporter thought this rise in sightings might be an artifact of reporting. After a quick analysis of other classes of UFOs, I determined that a variety of other types of UFOs were relative constant in numbers from year to year except for a gradual rising trend in overall sightings. So in my opinion, this large increase of diamond UFO sightings is a relatively recent occurrence and needs to be studied.

World sightings for diamond shaped UFOs have obviously been on the rise. But the story gets bigger when we begin looking at the global numbers. For example, the combined diamond UFO sightings reported to both the MUFON and NUFORC for 2014 total about 234 globally; giving New York State about 3% of the world diamond UFO sightings. I hope other investigators in the UFO research community will continue to monitor these increasing numbers.

1 January 2015: at about 12:30 a.m. a resident of Carmel, NY observed two bright red lights in the sky. She thought at first they were fireworks, because of New Year’s celebrations, but then the lights started to move horizontally across the sky, west to east.

2 January 2015: at about 3 a.m. a resident of West Babylon, NY was walking his dog and witnessed an object in the sky that exhibited a red to blue streak then disappeared.

5 January 2015: at about 9 p.m. a resident of Staten Island, NY saw three orange lights, flying in a triangular formation, not blinking. He reports that they were moving silently in the southern sky then disappeared.

9 January 2015: at about 11:30 p.m. a Rochester, NY resident observed a Star-like object flying in a slow circular path. The object suddenly speeded up and left the area rapidly. He describes it as a bright white cigar shape that disappeared in cloud bank.

10 January 2015: at about 1 p.m. a New York resident reports watching the weather channel during the eruption of a Mexican volcano. During the news clip the observer noticed a “saucer” shaped UFO apparently observing the volcano. “…it resembled a dash mark with a round bulb on the top and bottom center…”