Now is the winter of the smartphone Hamlet.

The melancholy prince of Denmark Financial in moments of reflection is never at a loss for words. He need only look to the text in his palm.

Everything’s up-to-date in Elsinor City. Even the merry Gravedigger (Crista Wirth) is grooving to her iPod. But, soft! Much of the characterization and action, up to the line, “The rest is silence,” honors what you remember from reading the text. What you see in this Syracuse Shakespeare Festival production at the State Fairgrounds’ Empire Theater is like nothing you have seen before.

Young director Sara Caliva declares herself a Shakespeare purist and speaks of standing in the rain to see A Winter’s Tale at London’s open-top Globe. Locally she has apprenticed in a batch of roles for the Syracuse Shakespeare Festival before debuting in her current role. Here she has teamed with producer Heather McNeil (M.F.A., Sarah Lawrence), whose name is cited right under Caliva’s on the cover of the program.

Together they have brought in some prominent tech people not seen in previous festival productions. These include ace lighting designer Bob Frame, long associated with Auburn’s Merry-Go-Round Playhouse, and sound designer/technical director Chris Yeckel. The local talent, including costumer Barbara Toman and set designer Navroz Dabu, are some of the best people in community theater. 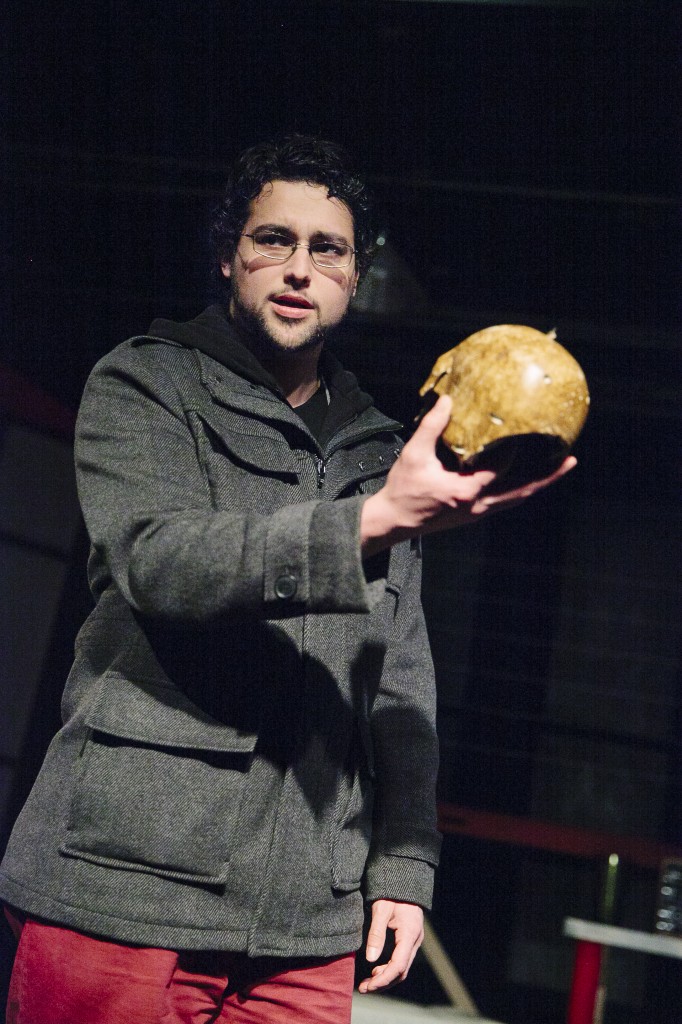 Caliva and McNeil’s innovations are so clever, arresting and continual that you have to stop yourself to parse how they relate to conventional stagings and ask if they advance the tone of what is usually thought of as our No. 1 tragedy. The first and probably the most successful is when Hamlet (Daryl Acevedo) encounters the Ghost of his father in this skeptical and secular age. The Ghost flashes in and out of focus on a large screen at stage right, as if being an interruption in a Power Point presentation. Casting spectrally white-bearded Michael Dougherty in his role overcomes any questions of metaphysics.

Later on this same screen we see Hamlet’s play-within-a-play, The Murder of Gonzago, with which he hopes to capture to conscience of a king. In a large, fashionable living room we see the husband-and-wife team of Nora O’Dea and Dan Stevens as the Player Queen and King. Sure enough, we see nasty poison poured into the King’s ear, but Caliva has chosen to run this prerecorded sequence with a laugh track and comic sound effects. These tend to undercut what a shock the performance of Gonzago is for the formerly cocky and now nervous Claudius (Ty Marshal).

Every innovation, even when charming, comes with a price. Caliva has everyone in the cast speak in conversational American English. This will be a boon for high school students seeing Hamlet for the first time. It also means that big speeches and soliloquys are diminished.

Consider Hamlet’s meditation on the worth of living, words many in the audience knows. Excluding this speech, Daryl Acevedo, who was Horatio in the Redhouse Arts Center’s Hamlet last March, creates a highly plausible character that’s not an echo of the many famous princes available on video. Melancholy, but not paralyzed. Frustrated, but striving for resolution. When he sits down to think aloud, however, the moral weight deflates. Is he talking about life and death or switching from AT&T to Sprint?

Also unusual in this production, the name of Ty Marshal as Claudius is listed along with Acevedo’s on the cover of the program. We quickly see why. Resplendent in a top-grade striped suit, Claudius dominates every scene he’s in. Syracuse New Times Syracuse Area Live Theater (SALT) winner Marshal also has the best diction and projection of anyone in the cast. Instead of being the moral weasel he has been in other productions, this Claudius is a tough customer, a formidable adversary.

(Note: Marshal is also the Manager of Digital Media for the Syracuse New Times)

The decision to play Polonius (Thad Striffler) for laughs, on the other hand, is counterproductive. Wearing a narrow-brimmed fedora to business meetings, this Polonius comes off as fatuous rather than windy, which undercuts the horror of his murder, when he is pummeled with a weight behind a translucent screen.

Strong support comes from Sarah Bradstreet as a heartbreaking Ophelia and Conlon Doran as her dark-browed brother Laertes. Too many other players suffer from weak projection, however.

This is a rambunctious Hamlet from a resourceful young director, who will have many more things to say.

Email ‘Hamlet’ to: [email protected] – be sure to include your name and contact information.