The Koch Brothers will spend close to a billion dollars to elect the Republican of their choice.

Onondaga County Executive Joanie Mahoney has a campaign fund in the hundreds of thousands of dollars, and is all but certain to cruise to a third term this fall without any serious opposition.

Leaving aside the questions having to do with who is giving her all this money and why they are so generous (some of the donors, it may not surprise you, do business with the county), a sane person could be forgiven for asking why she feels the need to be piling up all that cash. 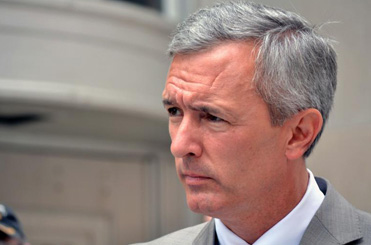 Representative John Katko, in his first month representing Central New York’s 24th Congressional District, has gone on record saying that his party advised him that raising money for re-election starts on Day One. Katko holds his nose and goes through the regular routines that public officials go through to beg for money. At least Katko has some reason to think his 2016 re-election race will be contentious and costly: Ours is the only district in the nation to change hands in each one of the past four election cycles. 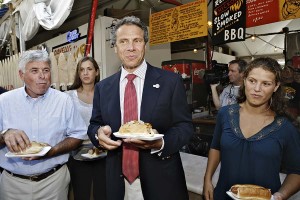 Gov. Andrew Cuomo amassed a political treasure chest of $45 million, giving him a 10-1 spending advantage over Republican Rob Astorino. His fund earned more in interest than Howie Hawkins raised as the Green Party candidate. That election fund doesn’t include the $16 million his friends at the “Committee to Save New York” spend to browbeat legislators into supporting Cuomo’s agenda. Lacking any real opposition, he spends the money on things like defending himself against federal corruption investigations (a practice he shares with former Speaker Sheldon Silver).

Bear with me for one more step.

The presidential race for 2016 is now in the phase that politicos call “the invisible primary.” That’s where potential candidates for the Oval Office parade themselves in front of the wealthiest Americans to see who is willing to write them enormous checks and thus confer upon them the status of “serious contender.”

In late December, billionaire brothers Charles and David Koch, invited four potential Republican candidates to California, essentially to audition for them. These two gentlemen have publicly promised to spend close to $900 million dollars to elect the Republican of their choice.

It was in the midst of this process that the Mitt Romney boomlet fizzled and the current Jeb Bush bandwagon saw the wind fill its sails. While most of us find it difficult to imagine that the Bush family contains so much talent that all of the males in the family should have their turn in the White House, the Florida Bush is now the subject of New York Times front-page profiles precisely because he has the Midas touch.

According to Frank Bruni, Jeb Bush nabbed $4 million during two consecutive evenings in Chicago. That was after a single-night performance that netted the same amount by wowing the wizards of Wall Street. The Kochs, to all appearances, have anointed him as worthy of moving on to the next round.

Hillary Clinton’s own coffers are bursting, but her moneymaking contains an artful twist. Many corporate interests, as well as foreign governments, have been generous donors to the noble efforts of the charitable Clinton Foundation that she heads, along with her husband, Bill, and daughter, Chelsea.

All across the country, every race above the level of dogcatcher is essentially about money. Our votes, when they are finally counted, are only the last stage in a process that has become fundamentally undemocratic. The first step is to garner a ton of money.

Many advocates for reform insist the problem has to do with transparency. It is secret money, they say, that corrupts. This thinking, which always struck me as daft, is surely outdated. Sheldon Silver listed his donors for years. If Preet Bharara is correct, that didn’t stop him from using his office to do their bidding.

We know exactly who the Koch brothers are and how much money they will spend to elect our next president. Does that make it any more palatable that they are allowed to exercise veto power over whose name ends up on the top of the ticket? Transparency alone will do nothing more than permit us citizens whose word should control our own fate, the privilege of knowing the names of our masters.

We should take a lesson from the Koch brothers: We will get a government that listens to us when we pay for it. With the rich getting richer, their voices only get louder. Without public campaign financing, “one citizen, one vote” is just a slogan.

How much do you truly want to go to SU?
The Consensus of Modern Government
To Top