Dear Syracuse With Love is on perpetual display on a billboard at Fayette and West streets, in Armory Square.

Quinton Fletchall was born and raised in Iowa and has a knack for making artisan pizzas. Six years ago, he moved to Syracuse to attend Syracuse University, and received his bachelors degree in Industrial Design. Four years after arriving here, Quinton moved from campus to an Armory Square apartment Downtown Syracuse. He is now a graduate student in the Communications and Rhetorical Studies Department. Walking to work is easy, because he is an engagement scholar through Imagining America, and works for the Connective Corridor through this program. 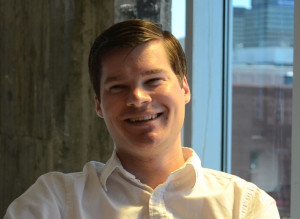 Imagining America is a national consortium of 90 campuses committed to animating and strengthening the public and civic purposes of humanities, arts, and design through mutually beneficial campus-community partnerships. In short, this  program provides scholarship opportunities to graduate and undergraduate students to link diversity and engagement efforts on campuses; and to partner with community-based arts and cultural organizations.

Quinton explains his feelings about living in the salt city:

“within the 6 years that I’ve lived in Syracuse, I did really take to the City, I’ve enjoyed living here, there’s a lot going on, it’s exciting,  but within that time I’ve also heard a lot of negativity about the city, which I felt was unwarranted – and undeserving. So I wanted to give a voice to the people who love the city, who care about the city”

In April 2013, lead by Quinton, the Connective Corridor held a photo contest asking residents and students to explore the city and take photos of what they thought was beautiful. “This is where I came up with Dear Syracuse With Love” explains Quinton, “I wanted to take these photos and show them, not just in a gallery setting, but where they were part of a larger conversation.” These photos are now used as part of a billboard series in downtown Syracuse.

Taking the conversation one step further, Quinton added another element to the “Dear Syracuse With Love” project – beginning with the CRAVE Festival (Sept. 20-21), where “actual, physical postcards will be distributed throughout the city, asking people to write a love note to Syracuse.” These postcards will then be displayed alongside the photographs. But, it’s not just postcards: “Instead of just asking people I knew to write these love notes, I wanted a way to collect the voice of the city and ask people to share their appreciation, and that’s where social media comes in.”

As a way of getting more people involved, a social media hashtag campaign was started, whereby people can use the hashtag #DearSyracuseWithLove (or the shorter version: #DSYRWL) to craft their message on Twitter or Facebook. Once Quinton receives the messages, via postcard or social media,  selected love notes will be added to the billboard alongside the photos from the contest. 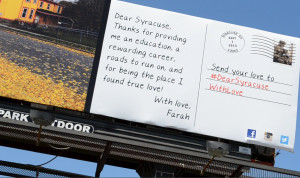 “I think it’s important, for a city like Syracuse, that has had a mixed history of decline and now a rebirth, that if there’s negativity it can be very discouraging – and this is one way to allow the power of positivity to overcome this, and allow this rebirth to flourish.”

With a website in the works, and public/gallery displays planned for the coming year, “Dear Syracuse With Love” is on perpetual display on a billboard (which gets updated with new images and messages monthly) at Fayette and West streets, in Armory Square.

Farah Jadran, the managing editor of Syracuse Woman Magazine and an adjunct instructor in public speaking at Syracuse University and SUNY Oswego, was one of the first to have her message displayed on the billboard. She’s also a marathon runner and recently became engaged to the sports director at CNY Central, Niko Tamurian. Her message reads: “Dear Syracuse, Thank you for providing me an education, a rewarding career, roads to run on, and for being the place I found true love! With Love, Farah” fashioned in the style of a postcard, neatly placed next to a photograph of a bright yellow home with fallen yellow leaves piling up out front. “I saw the hashtag going out over Twitter and got excited about it” says Jadran. “So I wanted to join the conversation. I put my message out there and my message was to show how grateful I am.”

Twitter users are limited to 140 characters or less “so I was really careful and wanted make every character count” Jadran says. “There’s a lot of wonderful things happening here in Syracuse and in my opinion a lot of wonderful people and great organizations doing amazing things, so to be a part of a project like this that is highlighting those things is a great honor.”

So maybe you have something good to say about the old salt city, how it’s changing or what you love about living here, and whether you’re a mom, an artist a student or a lifelong Syracusan, there are plenty of ways to be part of this conversation, and to show your love for the city and region we call home.

Artists Focus on Near West Side
Power of Light
To Top