Many teachers say it has never been this bad before.

For a long time, I have been quite certain that I would be an excellent teacher. For about 45 minutes. After that, I would be a felon.

To stand before a class as a guest makes you feel good. You feel like you’re contributing to the younger generation. You feel good discharging your civic duty to pass on whatever wisdom or experience that someone, accurately or not, has decided you possess and which holds some value to the students in her charge.

You do your piece, hope you’ve imparted something worthwhile, and you think you’ve seen in the student’s eyes some signs that maybe you’ve made a difference. Then you walk out the door and the real work begins. You might be tempted, in a moment such as this, to think to yourself: “Hey, I could do this.”

It’s like that feeling I get when I’m driving up I-81 and switch the radio to a classic rock station, and “Stairway to Heaven” comes on, right in the middle of the song. It’s that moment just when the tempo picks up, and the line which, back in high school, we thought was sung “and there’s a wino in the road,” and I will start tapping the steering wheel and my head will shake quickly back and forth, and I start to sing the lyrics, possibly even getting some of them correct. And since the gods of rock are with me— indeed they love me— I come off the exit ramp at Adams Street and stop at the light and it all comes to a climax just in time for me to sing, in a trembling voice, channeling Robert Plant, the one line even I cannot mangle: “And she’s buy-uy-ing a sta-air-wayay. . .  to hea-a-ven.”

Did I nail that, or what? The guy behind me beeps his horn. He begs to differ.

Thinking that we all could handle a classroom full time is that kind of delusion. While not every teacher rises to the level of Jimmy Page, teaching is a skilled profession that requires a master’s degree in New York state.

Teachers complain of being under attack, that they are under resourced, and most of all, that they are kept from doing their jobs by the twin pressures of high stakes testing and performance evaluations. Many teachers say it has never been this bad before.

The sad truth is that it has always been so. In her carefully documented history The Teacher Wars: A History of America’s Most Embattled Profession (Doubleday, 2014), author Dana Goldstein demonstrates how, for two centuries, America has liberally heaped expectations and criticism upon those we charge with developing the minds and character of our young. The current fads in education— let business people run the schools, give teachers bonuses if their kids do well on the test —are as old as the one-room schoolhouse, says Goldstein.

The central critique of our schools today is that teachers are the problem. They earn too much, get too much time off, and worst of all, you can’t get rid of a bad teacher. 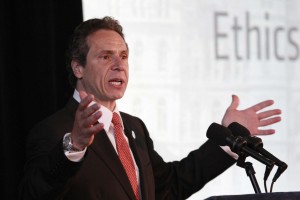 Clever modern politicians like Gov. Andrew Cuomo like to have it both ways: He tells us how he loves teachers, he just doesn’t like their unions.

Clever modern politicians like Gov. Andrew Cuomo like to have it both ways: He tells us how he loves teachers, he just doesn’t like their unions.

Goldstein also reveals this stubborn fact: Teacher tenure predated unions, and for decades tenure enjoyed bipartisan support, much like Social Security. Her research also indicates that as few as 2 percent of the nation’s 3.3 million public schoolteachers are considered incompetent, a lower percentage than found in other professions.

As you read Goldstein’s history, you have to wonder: Is it possible that teachers are criticized more harshly because most of them are women?

Here’s a comparison that illustrates the point. What happens when corruption or abuse is uncovered in a police department? In law enforcement nationwide, 87 percent of the officers are male. When there is talk of a bad cop, two things happen: Public officials proclaim that it’s just a few bad apples, and stories surface about good, sometimes heroic things the indicted officers have done in the past.

No one dares to suggest that all cops are crooks, moochers, abusers or worse. Can you imagine Gov. Cuomo riding into town suggesting that police precincts should be run by bankers or that we should pay cops more if they make more arrests?

News and Blues
Time to play MARCH BADNESS
To Top