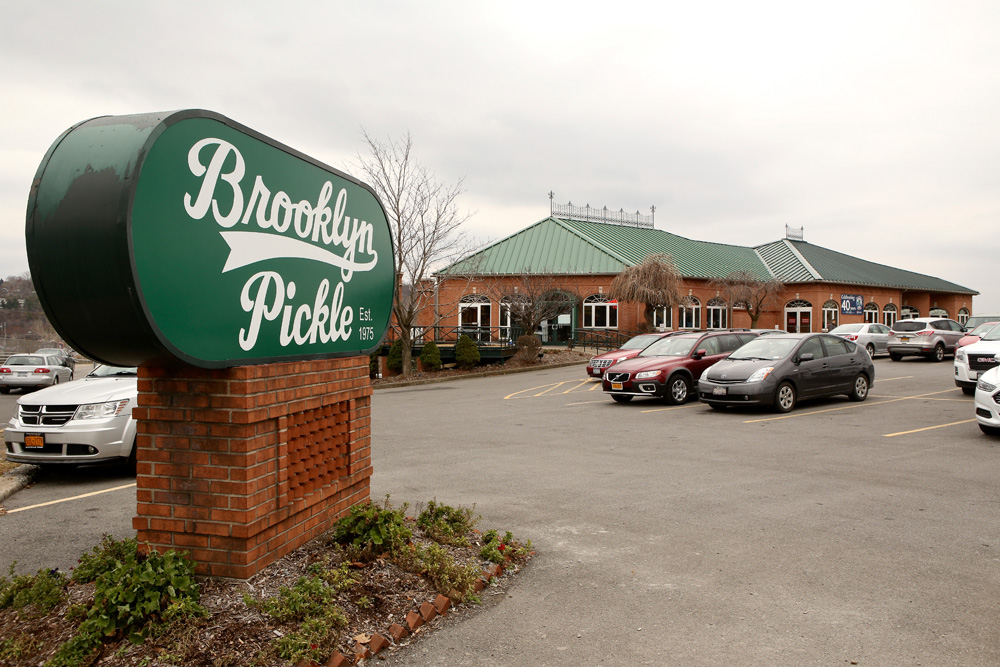 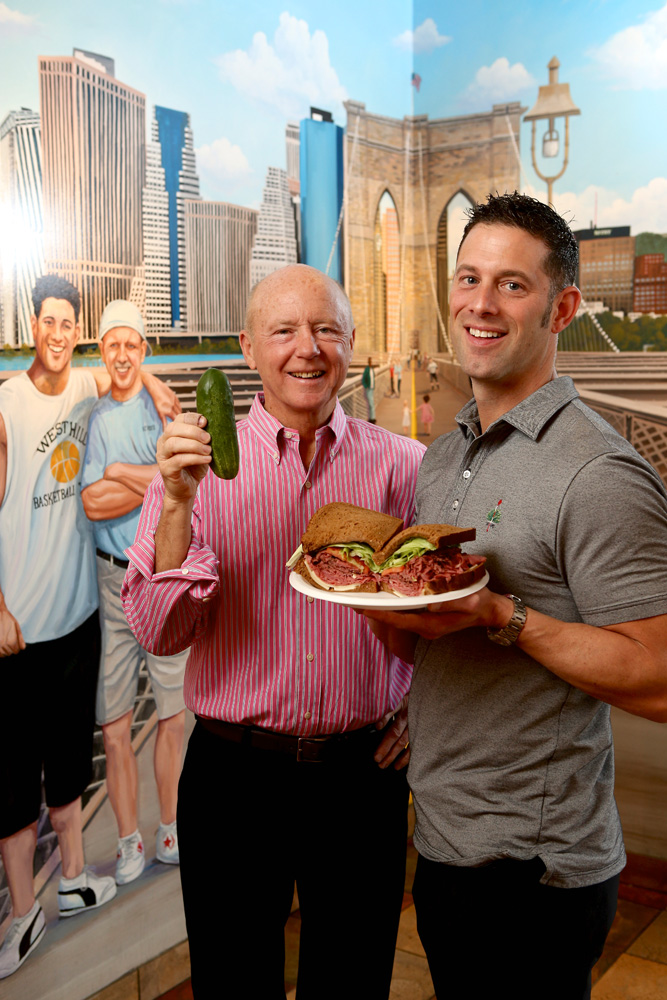 Paventi included the Brooklyn Pickle Special as part of a series titled “Iconic Syracuse,” the foods he served up earlier this year on his blog, Al Dente: An Eater’s Journey. “If the Brooklyn Pickle is Syracuse’s king of sandwiches,’’ Paventi writes, “this is their crown.’’

Paventi grew up in Central New York and lives in the western suburbs of Syracuse. He’s a cook and an “eater’’ (not a “foodie”) and says the Brooklyn Pickle reminds him of the delis he frequents when he visits family on Long Island. The Pickle gets icon status, he says, because “there’s nothing else like it in Syracuse.’’

“The Brooklyn Pickle is reliable. It has its place, its niche. It has value: There’s quality there. The soups are good and homemade. When you think about what they’re doing in volume … that’s history and name recognition.

“It’s just a good place to go and grab a sandwich. As long as the line isn’t too long — which it always is, because it’s the Brooklyn Pickle.’’

The Brooklyn Pickle is celebrating its 40th year in business this year. The official anniversary was celebrated in July, with specials like $4 sandwiches, 40-cent side dishes, raffles and a vacation giveaway.

Like Heid’s of Liverpool, Twin Trees, Dinosaur Bar-B-Que, Harrison Bakery and others, the Brooklyn Pickle is a Salt City institution. It’s the type of place where you take visitors to give them a real taste of Syracuse. For many transplanted Central New Yorkers, it’s the first stop for a “taste of home” when they return for a visit.

No one could be more pleased with the popularity and staying power of the Pickle than owner Kenneth Sniper. “It’s a tough business,’’ Sniper says. “You have to be committed. You have to have a passion to stick with it.’’

Sniper grew up down the street from the Brooklyn Pickle’s east location, 2222 Burnet Ave., and lives nearby. He likes to say he’s been on Burnet Avenue since age 4. He attended St. Vincent de Paul School and later Onondaga Community College and SUNY Geneseo. He worked as a teacher and a probation officer but knew he wanted to have his own business. 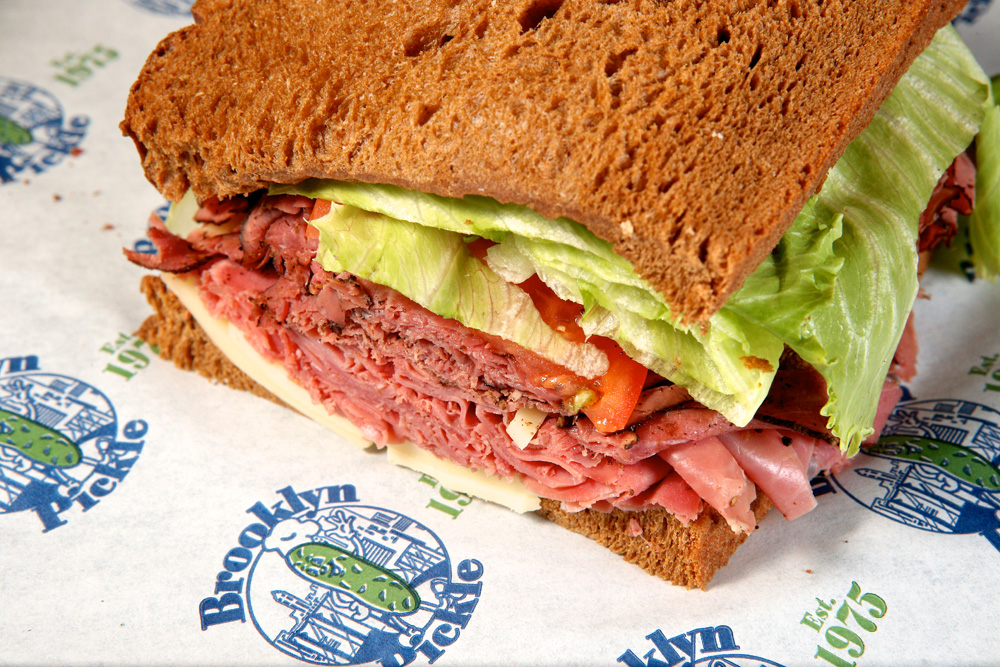 He opened the Brooklyn Pickle in summer 1975 in a 13-by-25-foot space within a small clapboard building at the corner of Midler and Burnet avenues. He had $2,200 in his pocket, he says, and a determination to serve Syracuse the best sandwich and the best pickles, reminiscent of the sandwiches and pickles he enjoyed on trips to Brooklyn to visit family. In those days, Sniper built the sandwiches himself.

Two years later, he opened a second Brooklyn Pickle, on West Genesee Street near Tipperary Hill, where the Byrne Dairy is now. In 1984 the shop moved across the street to its current location, 1600 W. Genesee St., site of a former gas station.

The Brooklyn Pickle isn’t a kosher deli and it’s not a traditional New York-style deli, with meats roasted and cured on site. Sniper calls the Brooklyn Pickle a “sandwich shop’’ that serves “Syracuse-style sandwiches.” Or, as the neon sign in the window on West Genesee Street declares, “GIANT SANDWICHES.’’

The Pickle uses breads and rolls from New York Bakery, near Lakeland. Two kinds of pickles, kosher dills and half-sours, come from United Pickle Co., in the Bronx.

The deli meat? That’s a trade secret Sniper prefers not to share, except to say that the meats are sliced fresh daily.

In 1975, corned beef was king. Today, it’s turkey, hundreds of pounds of it each week. “People are all about the white meat now,’’ Sniper says with a smile.

The sandwich and sub menu has expanded over the years to include soups (usually four a day), salads and comfort-food specials at each location, like chicken and biscuits, chicken riggies, shepherd’s pie and macaroni and cheese.

Neptune stew is always on the menu. It features crabmeat, shrimp, clams, mushrooms, onions and peppers in a tomato-based sauce. Desserts, including oversized chocolate chip cookies, brownies and cream cheese brownies, are baked on the premises.

Both Brooklyn Pickle locations are open Mondays through Saturdays, 9 a.m. to 8 p.m. Sniper’s goal every day, he says, is to serve “the best product in the least amount of time in the most pleasant manner possible.’’

“When someone comes in here, I don’t want to see them waiting in line for a long time,’’ Sniper says. “This might sound corny, but it’s about the customer.’’

Success in business is also about giving back to the community that supports you, Sniper says. He’s a major supporter of youth sports programs and charitable organizations in Syracuse and Central New York.

Michael Johnson drives a truck for Paul de Lima Coffee and lives in the Finger Lakes village of Naples. He stops in the Brooklyn Pickle’s west location every opportunity he gets, which is usually once a week. He used to work in restaurants in Syracuse and lived in an apartment at the corner of West Genesee Street and Willis Avenue for a time.

Johnson’s usual order is a roast beef sandwich. He marvels at the efficiency of the place, even when there’s a long line. And he can’t get enough of the pickles.

“I wish they would open one out this way,’’ Johnson says.

Sniper gets that request a lot — “I wish you would open Brooklyn Pickle in Baldwinsville or Buffalo or Rome’’ — and it makes him happy. But he has no plans to expand beyond the two locations, he says. 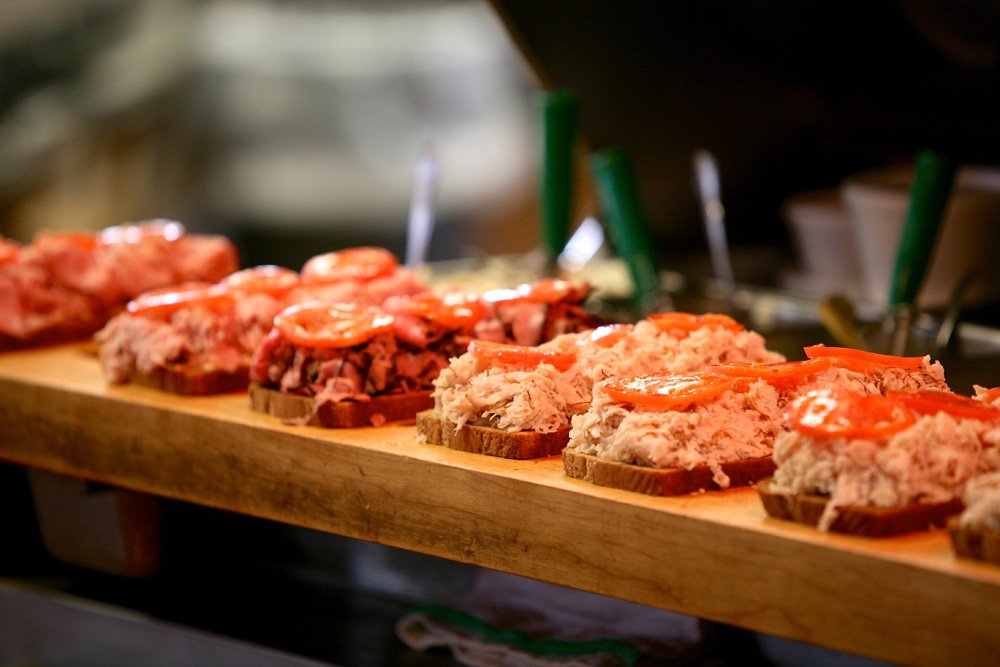 Also in a leadership role is Brooklyn Pickle vice president Craig Kowadla, who Sniper considers a son. Kowadla handles much of the day-to-day operations and travels between the two shops. He has introduced Brooklyn Pickle branding, like the smiling pickle logo (with the Brooklyn Bridge in the background) on carry-out bags and apparel such as colorful T-shirts and hoodies.

So how does a place with such a long track record stay fresh?

“When you become an institution, people almost don’t want you to be fresh,’’ Sniper says. “They want that familiarity. On the flip side, you can’t be staid.’’

Bill Lipke remembers the original, cramped Brooklyn Pickle on Burnet Avenue. (He also recalls playing basketball against Ken Sniper in high school.) Lipke lives near Baldwinsville and works in downtown Syracuse, which gives him easy access to both Brooklyn Pickle locations on occasion.

His usual order: corned beef on dark rye. “Not good for the cholesterol,’’ Lipke says, voice trailing off.

“Forty years is a long time,’’ Lipke adds. “Ken has a great crew and he does a lot for the community. And the food is top-notch.’’

At 67, Sniper has slowed down — somewhat. He often can be found in his mural-lined office, located off the kitchen downstairs at the 11,000-square-foot Brooklyn Pickle on Burnet. He spends more time at his summer residence on Otisco Lake and his winter place in Florida.

Yet he doesn’t consider himself ready for retirement. “I love the customers and our employees,’’ Sniper says. “I’m here pretty much every day.’’

1975: Ken Sniper opens the Brooklyn Pickle at the corner of Burnet and Midler avenues, on the east side of Syracuse. Quarters are cramped and several other tenants occupy the building, including a beauty salon.

1977: A second Brooklyn Pickle shop opens on West Genesee Street near Tipperary Hill, in the small building where Byrne Dairy is now.

2007: Major expansion of the Burnet shop to its current form.

2011: Major expansion and renovation of the West Side shop, to its current form, including a new dining room with a Brooklyn Bridge mural.