“The atmosphere. The crowd. It’s an event.”

Here’s the first thing that came to Syracuse Crunch season-ticket holder Chuck McCarty’s mind when he heard that Crunch owner Howard Dolgon had arranged for his team to host the “Frozen Dome Classic” – the first hockey game at the Carrier Dome.

“Wow, he’s going to do it again,” McCarty said.

McCarty, who has owned season tickets since the Crunch started in 1994, was referring to Dolgon’s previous can’t-be-done idea, an outdoor game at the New York State Fairgrounds. That game, on Feb. 20, 2010, attracted a then-American Hockey League record 21,508 fans.

So what was McCarty thinking this past Saturday, when a crowd of 30,715 filled the Dome to watch the Crunch defeat the Utica Comets 2-1 and set an attendance record for an indoor professional game in North America?

Crunch player Mike Angelidis had a different word to describe it: “Mesmerizing.” As the Crunch’s starting center, Angelidis was involved in the game’s opening face-off. But before that, Angelidis looked up and skated in a small circle to get a panoramic view of the bodies that soared to rafters. 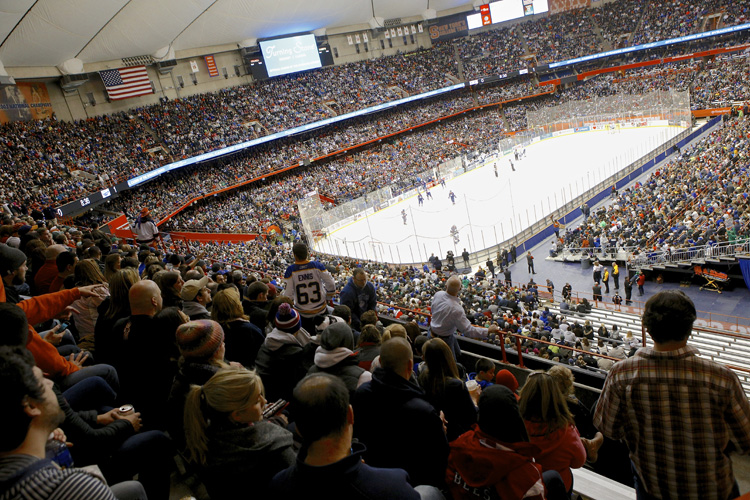 “It was just something special to see so many people turn out to watch a hockey game,” Angelidis said. “I think it was bigger than the game; I think it was something for the area, not just Syracuse, but Utica, as well. It’s something everyone can be proud of to see so many people come out for their city and their sports teams and cheer them on and create something special out of it.”   “I just wanted to take it all in before the game and then let it go and play hockey,” he added.

That was a not-so-veiled jab at Dolgon’s boast that Syracuse would break the indoor record because Syracuse is “the best pound-for-pound sports city in America.”

The record of 28,183 had been set on April 23, 1996, when the Crunch’s NHL affiliate, the Tampa Bay Lightning, hosted the Philadelphia Flyers in a Stanley Cup playoff game at Tampa’s Thunderdome.

The Crunch got the last laugh, of course, setting the attendance record and rallying to win on goals by Joel Vermin in the first period and Yanni Gourde in the second. Crunch goaltender Andrei Vasilevskiy made those goals stand up by stopping 26 shots after Friesen’s early goal.

And Dolgon? After working for more than three years with Syracuse University to pull it off, he proved once again that with equal parts imagination and elbow grease, the impossible is possible.

“We were supposed to be a town where hockey teams went to die, but we were pretty alive tonight, I thought,” Dolgon said, referring to several former professional teams in Syracuse that went belly up. “This was the place to be, and it’s a tribute to the people of Syracuse, and the people of Utica. Central New York became big time tonight in a sport that nobody believed in. We know we’re a basketball town, we know we have a great football history, but everybody doubted hockey. No more. No doubts.” 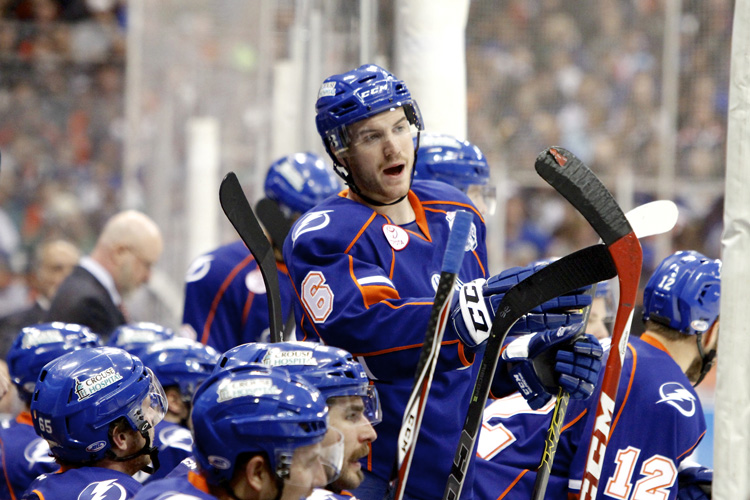 There’s no doubt that what Dolgon, Crunch Senior Vice President of Business Operations Vance Lederman and Chief Operating Officer Jim Sarosy do best is turn a game into an event. Given the Dome as their playground and with the rink set up in the basketball configuration, they were able to use the behind-the-curtain area in a way where, as one fan noted, “You don’t know where to turn.”

There were all kinds of free games and activities for kids; an on-loan hockey Hall of Fame exhibit with cool stuff such as a puck used in the 1901 Stanley Cup final; a display with NHL trophies such as the Lady Byng Memorial trophy for “Most Gentlemanly Player” (who knew?); autograph guests such as NHL Hall of Famer Glenn Anderson and former Crunch “Nasty Boy” Jon Mirasty; and all sorts of Frozen Dome Classic gear, including “Pound For Pound” T-shirts and “Hockey History 28,183+” T-shirts.

Tim and Kristin Walker, of Clay, brought their children –Cameron, 7; Leah, 4; and Aaron, 18 months – to the pre-game party. They are truly a hockey family: Kristin’s parents, Tim and Rosemary Kinsella, of Liverpool, are lifetime Crunch season-ticket holders; Kristin started going to Crunch games when she was 14 and now takes her kids; and Tim and Kristin are both coaches in the Midstate Youth Hockey program (Tim coaches Cameron, and Kristin coaches Leah).

So there was no question they’d be among the record crowd.

“This is awesome,” Kristin said. “It’s so much fun for us and the kids. You can’t go wrong with balloon animals and face painting.”

Jack Schalk, 6, attends Crunch games with his parents at the War Memorial Arena. His grandfather, John Schalk, of Manlius, decided on Saturday to bring Jack to the game, and if they didn’t end up buying tickets 30,714 and 30,715, they were pretty close. Jack and John sat about as far away as anyone in Section 335, Row S.

“We just walked up and bought the seats,” John said. “Actually, you can see it all OK. Much better than I thought.” 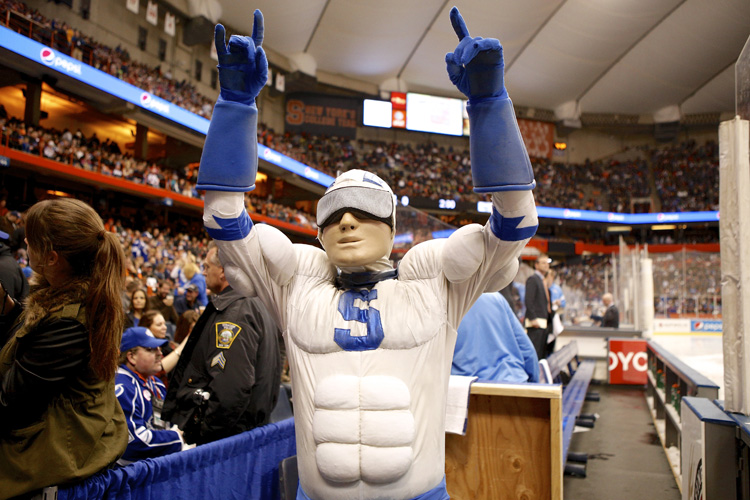 Dome fans are used to long-distance viewing, and the fans throughout the Dome Saturday seemed to enjoy the spectacle, from the pre-game introductions of former SU greats Joe Morris and Derrick Coleman to the human “wave” late in the game. About the only dud of the night was a lame stunt by Steve-O of MTV’s “Jackass” fame, but that’s a footnote on a night when hockey hit the big time in Syracuse.

“I don’t think we really felt it until we walked out for the game and saw what was going on outside and the energy and the crowd and how big it was,” Crunch coach Rob Zettler said. “It was a special game tonight, really special.”

Matt Michael is a freelance writer based in Syracuse. Email him at [email protected]

Interview: Marsha Weissman
Still Befuddled by the Mystery of Women
To Top