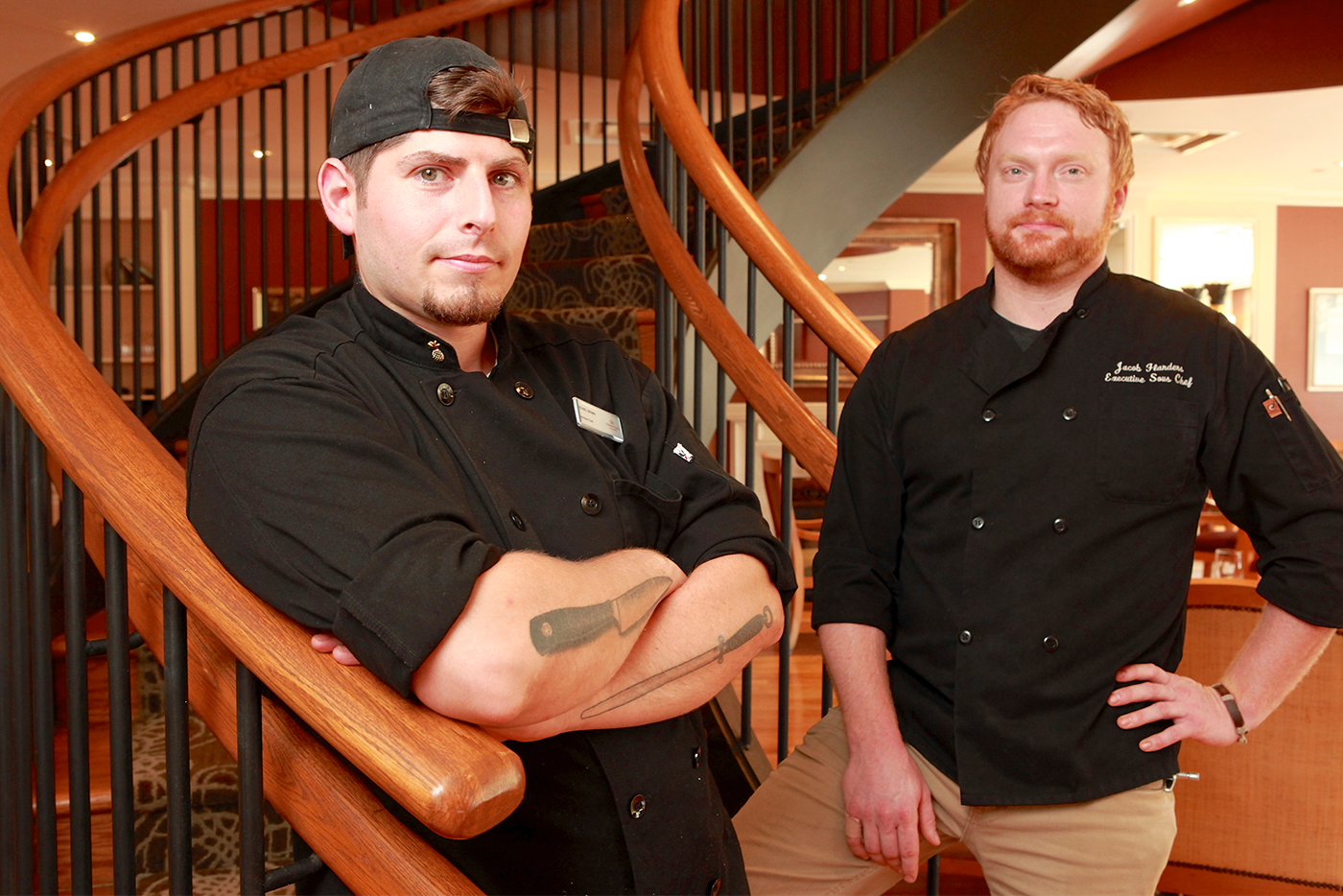 The Crowne Plaza Syracuse, 701 E. Genesee St., is upping its game in the dining department. On Monday, Sept. 12, the property rolled out new breakfast, lunch and dinner menus for its Redfield’s restaurant and the Library Lounge, as well as new room service menus for overnight guests.

“Diners in Syracuse have a lot of options,” says Kyle D. Hares, director of sales and marketing for the Crowne Plaza. “We want to do something that differentiates us.” 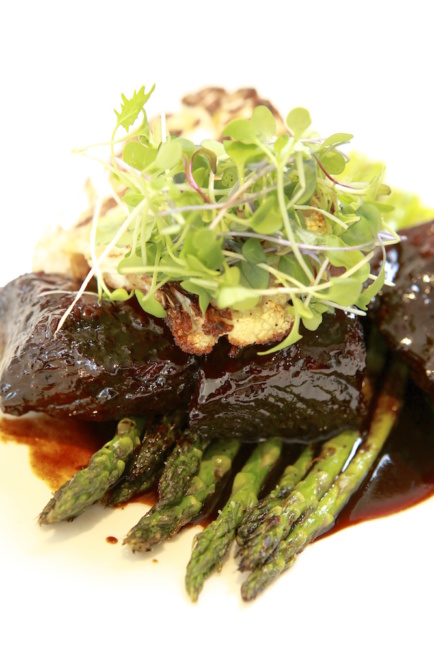 The new menus are a reflection of the passion and creativity of executive chef Michael Brown, 33, who came on board at the Crowne Plaza earlier this summer. You might be familiar with him from Laci’s Tapas Bar; he served as executive chef for three and a half years and made his mark on Laci’s signature small plates and nightly specials.

With support from sous chef Jacob Flanders, Brown has re-imagined the menus at the Crowne Plaza, putting an emphasis on comfort foods, classic American favorites and world flavors. “I think of Syracuse as a melting pot,” Brown says.

Brown gets excited when discussing the new lunch and dinner offerings. For lunch, there’s a slab bacon BLT, made with bacon that’s cured and smoked in-house, served with the usual trimmings on your choice of bread. There’s a street taco, available with pork carnitas or fried catfish (an homage to the catfish burritos he loves at Alto Cinco on Westcott Street), served with pickled red cabbage, shredded cheddar and salsa Roja.

If you like burgers, the build-your-own options are endless. There’s an eight-ounce basic burger, with lettuce, tomato, onion and pickle. Optional add-ons include fried egg, bacon, fig chutney and Asian slaw. Basic or all dressed up, burgers are served on brioche buns from Mario’s Bakery.

For dinner, Brown takes comfort food to another level with smoked blue truffle macaroni and cheese (penne pasta with smoked blue cheese and truffle oil in a creamy cheese sauce); farro risotto (with root vegetables and Humboldt Fog goat milk cheese); and shrimp and grits. There’s steaks, chops, seafood and a dish he calls Sweet Heat Short Ribs, which are slow-cooked in prune juice and chili paste and served with asparagus and a wedge of cauliflower.

There will be nightly dinner specials, but probably not for another couple of weeks, while the new menu is tested and tweaked. Brown says he will take his cue from the seasons and from local growers and suppliers, like Main Street Farms and Fresh Herbs of Fabius. The dessert menu is a work in progress, Brown adds, and has not yet been finalized. 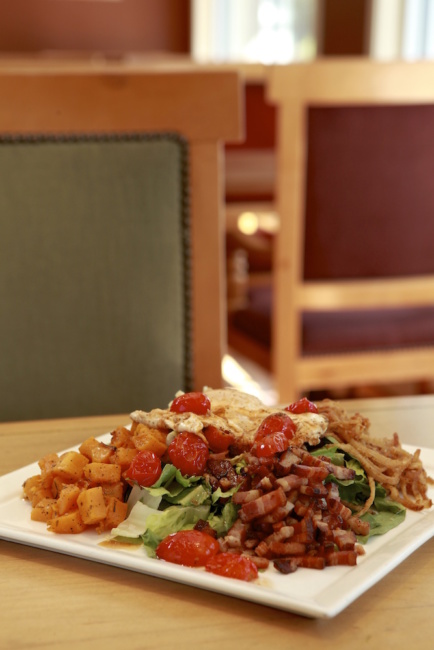 Not familiar with the Crowne Plaza Syracuse? It’s the tall, round hotel east of downtown Syracuse and west of Syracuse University, next to Route 81 at East Genesee and Almond streets. It was built in the 1970s as a Holiday Inn and has since had numerous owners. In May, the 279-room hotel was purchased by TJM Properties of Clearwater, Fla.

Redfield’s is a chic, sophisticated restaurant with dining on two levels, tall windows overlooking Forman Park and a spiral staircase leading to the upper level. The hotel’s Library Lounge is a casual, comfortable place to have a drink and a bite to eat. It has its own menus, featuring select items from the Redfield’s menus.

For Brown, taking the lead as executive chef at the Crowne Plaza is an exciting step in his restaurant journey. He grew up in Central New York, graduated from Onondaga Central School and got his start in restaurant kitchens as a dishwasher at the Inn of the Seasons, on Onondaga Hill. He has worked at the Bellevue Country Club, LaFayette Country Club and at the Lincklaen House in Cazenovia, where he worked alongside acclaimed chef Chance Bear. He had moved from Laci’s to Sky Armory in downtown Syracuse when he learned about the opening for executive chef at the Crowne Plaza.

“At this point in my career,” he says, “I felt I was ready to take on something larger.”

Brown’s goal is to bring a fresh energy to hotel dining, which can have a reputation for being ordinary and predictable. The hotel’s Library Lounge has its own pub-style menu, featuring burgers, salads, sandwiches, appetizers and other items from the Redfield’s menus. His eventual aim is for guests to be able to order from the lounge menu in the dining room, if they want, and vice versa — but he’s taking things one day and one step at a time.

“The menu is based on the things I like to cook and what I know Syracuse wants to eat,” Brown says. “I want to change that ‘hotel restaurant’ feel. I want you to come in to Redfield’s and have that Armory Square restaurant feel.”

Redfield’s restaurant is open daily for breakfast, lunch and dinner, and the hotel’s Library Lounge is a comfortable, intimate setting for cocktails and relaxed dining. For more information, call 479-7000 or visit cpsyracuse.com.