Community groups put art on display for the holidays

Over the next seven weeks, a range of local organizations will present holiday-time events featuring work created by artists or artisans from Central New York. Taken as a whole, the events pose an opportunity to view dozens of objects made locally. And, each event has its own identity.

Art Mart, for example, is the granddaddy of holiday season happenings. It kicks off its 59th season with a reception Friday, Nov. 8, 4 to 7 p.m., at the Atrium, City Hall Commons, 201 E. Washington St., near Hanover Square. As in past years, varied artworks will be presented: Judi Witkin’s jewelry, David Lisi’s ceramics, watercolors and ceramics by Janet Matthews, items connected to the Syracuse Poster Project. Their posters blend local poets’ text with local artists’ visual expression.

“Art Mart is a good outlet for local artists,” says Judith Hand, who will have acrylics and watercolors on display. “There’s an opportunity to show your work at the same location for an extended period of time.”

Indeed, Art Mart is open 11 a.m. to 4 p.m. Mondays through Saturdays until Christmas. Staffing for that schedule is a cooperative project; artists either work shifts or make a financial contribution to facilitate staffing. 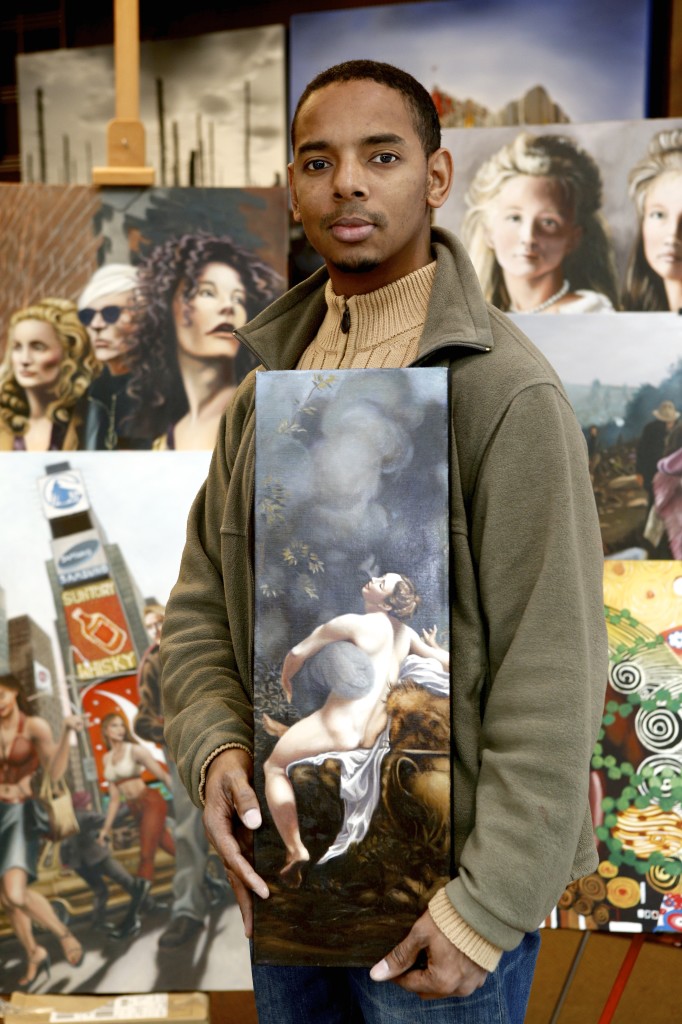 CNY Artists, meanwhile, has ties with a slew of local artists, and that’s reflected in its gallery, on the second floor of Shoppingtown, near the food court. That space is crammed full of items for sale: clocks, prints, pieces by Ron Warford, Delores Herringshaw, Robert Carroll, and other artists. The media include photos, paintings, drawings and more.

In addition, CNY Artists has set up a space for Kamiiron Pritchard, one of its artists, on the first floor at Shoppingtown. There he creates paintings with historical themes, portraits and other works. The public can view the space; it’s an open studio.

A third group, the Syracuse Cultural Workers, has a presence in Syracuse and beyond. On one hand, they ship their annual Peace Calendar, holiday cards and other items to food co-ops, independent bookstores and various venues across the United States. On the other, SCW was born in Syracuse and has had its headquarters here for more than three decades.

At 400 Lodi St., SCW staff planned and designed the 2014 Peace Calendar from scratch. It features a range of themes and artwork: documentary-style photos from the 1950s of Daisy Bates, a Little Rock, Ark., newspaper publisher, and nine high school students that reference the struggle to integrate schools; Max Ginsberg’s painting of a Gulf War veteran participating in an anti-war demonstration; “We Protect What We Love,” by Karen Kerney, SCW’s art director. Her paper/watercolor collage has a cosmic flavor, as it samples green earth, fish, the stars, an urban building and other aspects of life on this planet.

The crafts fair, organized and sponsored by the Syracuse Peace Council, has several components, including regular performances of folk and roots music during the afternoons. Beyond that, several local groups, including the Peace Council and Alliance for a Green Economy, will staff tables during the weekend.

Finally, artists and activists Vanessa Rose, Stasya Erickson, Brianna Kohlbrenner and Courtney Rile have organized a series of one-day markets to provide exposure for artists and artisans from Central New York. The Salt Market, and its sister, The Pepper Market, have taken place at urban sites such as downtown, Little Italy and the Near West Side.

On Dec. 14, 10 a.m. to 4 p.m., there will be a Pepper Market at 499 S. Warren St. There’s a 30-30 theme for the day: 30 artists, no item more expensive than $30. The pieces on display include Tommy Lincoln’s illustrations, Gandee Ceramics, Theresa Barry’s photos on blocks and works from Black Rabbit Studio.