The drill is part of a stepped-up response to the shipments of Bakken Shale oil and other hazardous materials that, according to a county document obtained by the New Times, “transverse our county on a daily basis.” Bakken crude is several times more volatile than conventional crude.

The undated document, titled “Hazardous Materials Incident Response Preparedness,” was prepared at the request of County Legislature Chairman Ryan McMahon. In the three-page paper, released by McMahon Aug. 6, Onondaga County says it has received a report from CSX railways, via the State Emergency Response Commission, providing what it calls “proprietary and confidential” information about the shipments.

It outlines steps the county, the city of Syracuse and neighboring fire companies are taking in response to the hazard. These steps include training with CSX for 110 first responders in June and enhanced GIS (Geographic Information Systems) mapping to identify “critical infrastructure” that might be affected by a derailment, explosion or fire.

This comes after federal Secretary of Transportation Anthony Foxx, citing the “imminent hazard” posed by volatile crude shipments, issued an emergency order mandating that rail companies, as of June 1, inform states when trains carrying more than 1 million gallons of Bakken oil move through their communities.

Those shipments have attracted increasing public concern after a series of derailments, including one in Quebec in July 2013 that killed 47 people. In April, cars carrying crude oil jumped the tracks in Lynchburg, Va., triggering a fire and fouling the James River.

In addition to the training and mapping, the county has obtained additional fire suppression foam and equipment through a grant from the Department of Homeland Security. The equipment, known as a Foam Tender, will be housed at Fire Station 2 of the Minoa Fire Department, near the Minoa rail yards. 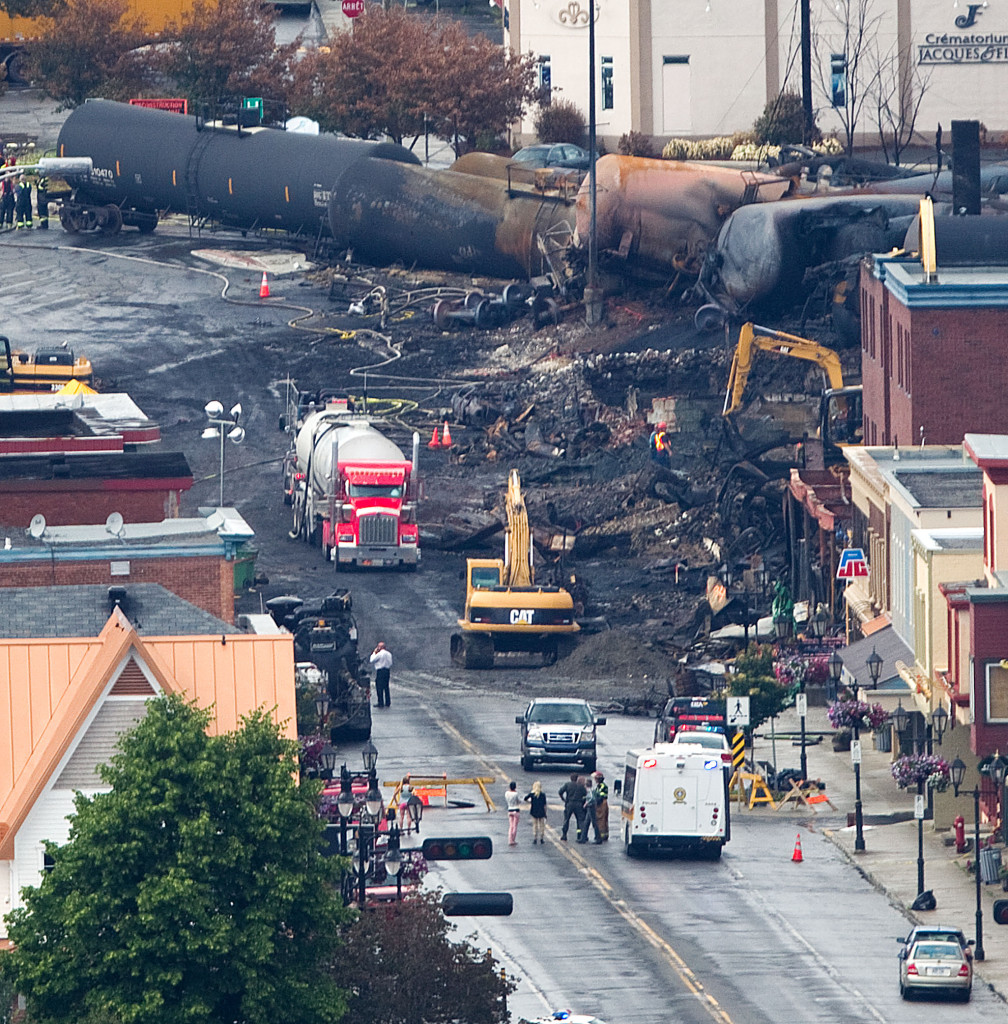 LAC-MEGANTIC, QUE: JULY 09, 2013 — A scene of the devastation in downtown Lac-Mégantic, Quebec Tuesday, July 9, 2013 after Saturday’s runaway train disaster in the small community. The train, with oil-filled cars behind it derailed. Explosions and fireballs followed causing loss of life and heavy destruction. (John Kenney /THE GAZETTE)

“The Foam Tender,” says the document, “will contain two 250-gallon foam totes containing Universal Gold AR-AFFF (alcohol-resistant aqueous film forming foam) on a trailer. We are also acquiring an additional 500 gallons of this foam that will be in 50-gallon drums. This foam is the best all-purpose firefighting and vapor suppression foam that we can purchase and can be used quite effectively for potential crude oil and ethanol incidents.”

McMahon calls the response a good first step. He had asked Kevin Wisely, the county’s emergency response coordinator, for a written plan suitable for public dissemination three weeks earlier. Wisely will also be discussing the issue at a meets of the legislature’s Public Safety Committee on August 13. The likelihood of a disaster here is very small, says McMahon, “but we need to prepare for the worst case scenario. You need to be ready. We’ve had plans, but we’ve never asked them to articulate it.”

Emily Bishop is the regional coordinator for New Yorkers Against Fracking. Her group and others organized a news conference on July 8 to protest the rail shipments of crude oil. Bishop also sees the counts as a step forward but is concerned that the document does not specify how residents living near the train tracks will be told what to do in case of a derailment.

“They are recognizing the danger and that there is crude oil coming through Syracuse,” says Bishop, whose group advocates for an end to the rail shipments. “There are additional efforts to prepare and train for a potential derailment. They have the foam in case anything does happen. My issue is that it doesn’t really inform the community. There is nothing about community meetings.”

She wants the county to share more information about the shipments. In the document, Wisely indicates that more specifics will not be provided; he writes, “CSX prepared a comprehensive hazardous materials density study for Onondaga County. Emergency Management is in possession of the proprietary and confidential information. It has been shared with key county/city emergency response leadership personnel for planning and preparedness purposes; it is not for any further dissemination.”

“Public discourse is extremely important,” says McMahon. Once we know what the plan is, if people want public meetings, we can do that,” McMahon says.

McMahon cautions that releasing more information about the shipments is “a bit of a balancing act. You have trains carrying flammable materials, and some people who may want to do some damage.”