There are two things you need to know about playwright Katie Forgette’s 2009 play Sherlock Holmes and the Case of the Jersey Lily.

Most people have never heard of playwright Katie Forgette or her 2009 play Sherlock Holmes and the Case of the Jersey Lily, playing through Saturday, Aug. 9, at Cortland Repertory Theatre. There are two things you need to know, however.

One is that Forgette, a Seattle-area actress, has written an actor-friendly piece where every player gets lots of shtick. Even Dr. Watson (Joel Stigliano) has snappy one-liners. Her dialogue revels in theatrical in-jokes. Secondly, Bill Kincaid, one of Cortland Rep’s favorite directors, knows how to find the gold hidden in neglected stage works, such as his 2010 turn in Six Dance Lessons in Six Weeks. Forgette’s little confection has never appeared in the Big Apple, so it’s just as well for her that it’s making its New York state premiere here.

Forgette’s plot relies on the collision of real-life characters, like actress Lillie Langtry (exotic beauty Danielle Shimshoni) and her pal Oscar Wilde (mildly foppish Jack Corcoran), with Arthur Conan Doyle’s stock company. No mere eye candy, Langtry is presented as a cerebral sort, equal to the hyper-rational Holmes (Nate Washburn), when she comes to seek his help in retrieving purloined and compromising letters. She’s been carrying on with the heir to the throne, and publication of the letters will cause scandal. This in itself is a gag because for all her acclaim on the stage, Langtry is best-remembered today as Edward VII’s main squeeze. 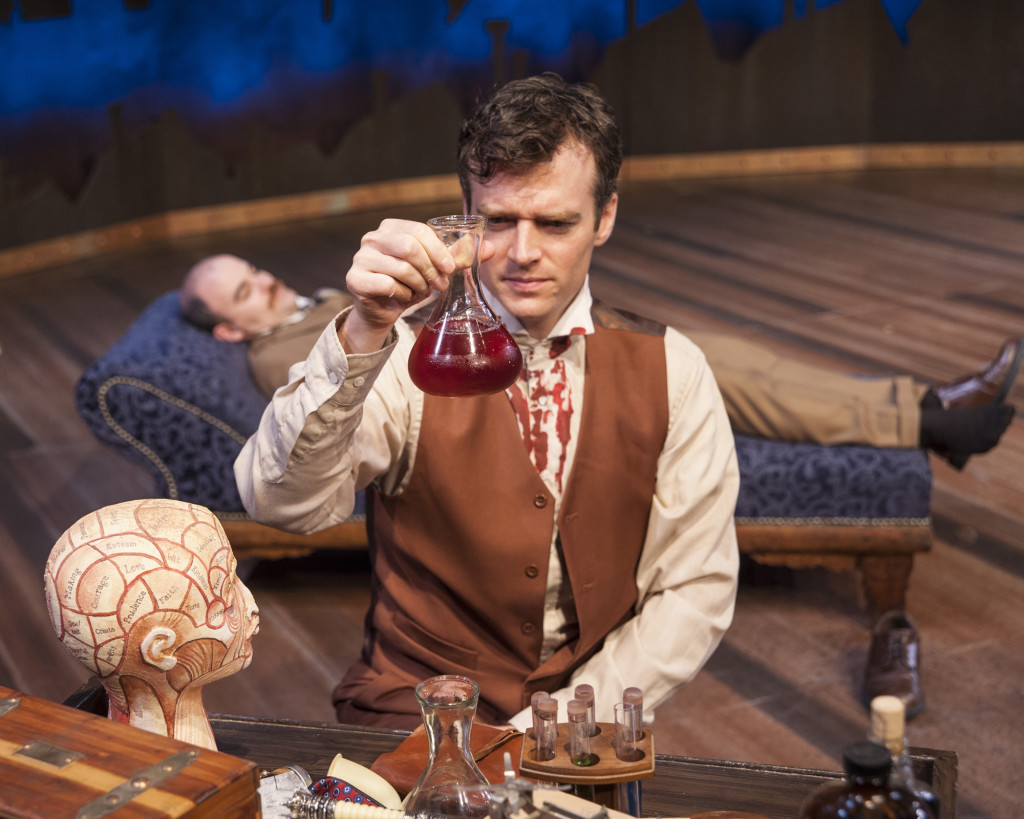 Nate Washburn (foreground) and Joel Stigliano in Sherlock Holmes and the Case of the Jersey Lily.
Photo by David Blatchley.

To gather information, Holmes must somehow appear in drag as Mrs. Padgett, which, astoundingly, fools such experienced viewers as Langtry and Wilde. Pushing the envelope a bit further, Mrs. Padgett retains Sherlock’s dry, terse wit, not unlike, um, Lady Bracknell. Oscar Wilde, currently working on a comedy to be titled The Importance of Being Forthright, is portrayed as taking notes. He will also take some advice on the clunky last word of his title. Playwright Forgette also reduces the risk of putting Wilde in her play by having the character repeat some of the choicest lines of the historical Oscar.

The show succeeds as a comedy, but it is not a spoof or a farce. Nefarious Professor Moriarty (David Gautschy), who engages Sherlock in the second act, really wants to kill him. His Cockney stooge Smyth (Luke Bond) means rough business. And the amoral housekeeper Irma (Wendy Bagger) presents real danger amid the stylish fun.