Nojaim’s market sticks with its Near West Side customers

Social scientists say one of the difficulties for the urban poor is the “food desert” — the scarcity of choices in the city. Reporter Ed Griffin-Nolan looks at how Nojaim’s market changes with the times. 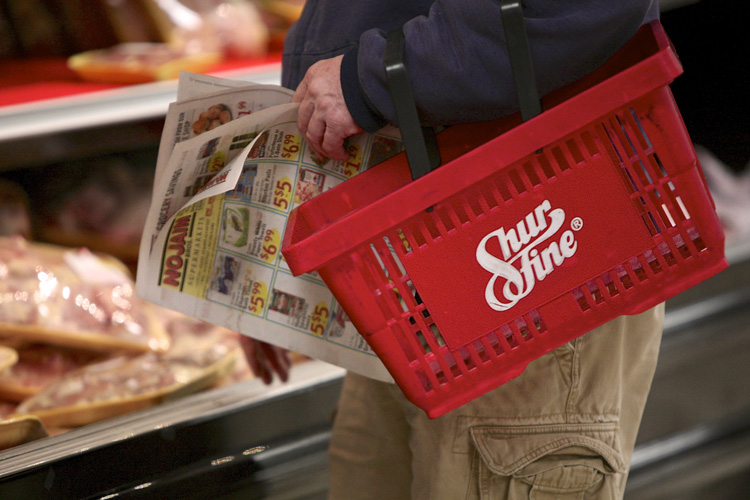 Emma McDonald was happy to be pushing her cart through the aisles at Nojaim’s market on a Monday morning just two weeks before Thanksgiving. A great-grandmother and retired midwife, she was loading up on supplies for her church’s Thanksgiving dinner at Hopps Memorial CME Church, scheduled for Wednesday, Nov. 26. Many of the trimmings on the table will come from the newly renovated and expanded Nojaim’s, a family-run store that has served the Near West Side in one form or another since 1919.

McDonald has a fierce loyalty both to her neighborhood and to the grocery store that anchors Gifford and South West streets, a stone’s throw and, at the same time, worlds away, from Armory Square.

“Why should I go to Wegmans?” she asks, a hint of outrage in her voice. “Why should I go out of my boundaries? I’m the inner city. We were the poor area, once upon a time. We need to support one another.”

She leans on the handle of the cart and looks around.

“This is a beautiful building.” 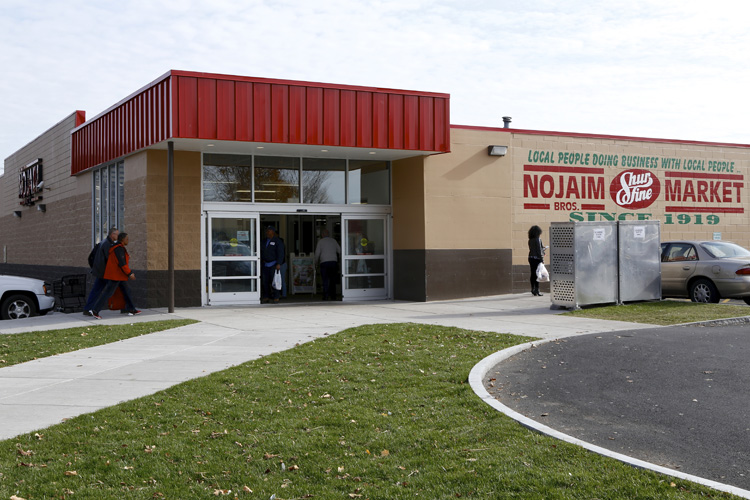 McDonald has been working with the food pantry at Hopps since 1979, back before there was a Food Bank of Central New York to help her. McDonald expects to feed more than 200 people at the Church Thanksgiving dinner. For all those years, she says, Nojaim’s always made sure her people got fed.

“When I needed something, I could come get it. Ribs, whatever it is. Nojaim’s has been a vital part of our kitchen. We get some of it donated, some of it we purchase, and if I didn’t have the money, they (the Nojaim family) trusted Hopps Church.”

Just a few blocks up Gifford Street, the Rescue Mission serves food to homeless men, and a few doors down from Nojaim’s parking lot, St. Lucy’s Roman Catholic Church feeds hundreds of poor people every Wednesday. Still, most people in the neighborhood shop for their food, just like people everywhere else, at the grocery store.

Joseph Morgan lives in Jamesville, but he comes to Nojaim’s for his meat and produce. An immigrant from Uganda, he has been going there to shop for 20 years.

“I started off selling flowers,” he recalls. “They let me sell my flowers in the parking lot. They could have run me off, but they let me be.”

“One hundred pennies to the dollar, and sixteen ounces to the pound,” says Morgan, reciting a slogan he learned from Paul Nojaim’s father, Charles, who ran the store until 1988. 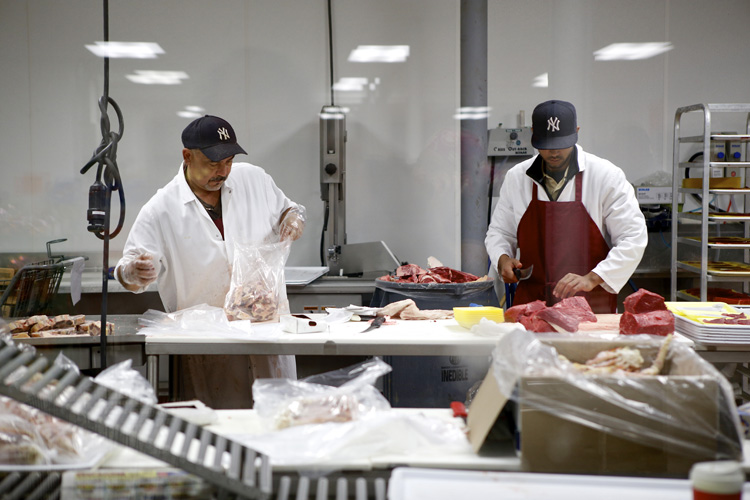 Joseph Morgan comes to Nojaim’s for the meat and produce.

The loyalty of folks like Morgan and McDonald helps explain how Nojaim’s has managed to survive while most independent food stores in town closed their doors, succumbing to the rise of superstores and the exodus of many middle-class Syracusans to the suburbs. 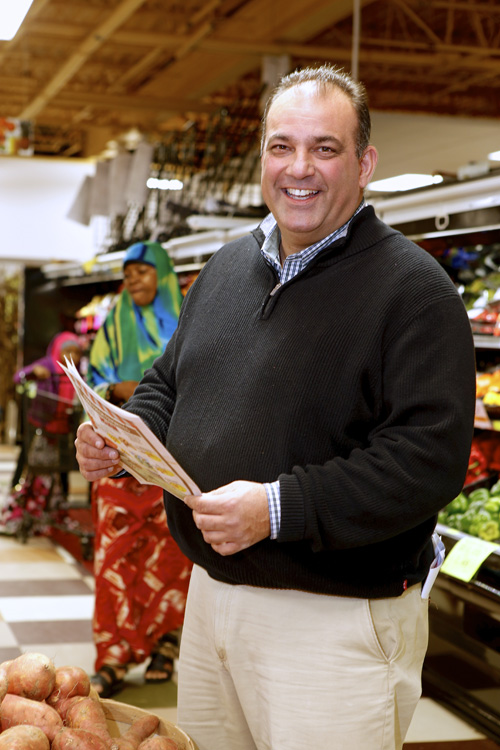 But to defy the odds and keep a midsize grocery store operating at ground zero of the poorest neighborhood in the city of Syracuse requires more than loyalty. It takes a lot of cash, a lot of risk, and a lot of work. Ninety-five years after his grandfather shook hands on a lease and paid $900 for a small market, this third generation Nojaim spent $2.7 million to expand his facility, making it more attractive and functional, and thus, hopes Paul Nojaim, more competitive.

He can’t tell you how many hours a week he puts in at work. “Ask my wife,” he jokes. (He and his wife of 19 years, Daisy, met at the store when she worked as a cashier).

Nojaim moves through the store that he redesigned, straightening a shelf of coffee cans here, greeting a customer there, calling a staffer to clean up an aisle. He’s a hands-on guy – talking to his plainclothes security guards one minute, helping a customer get her fresh chicken wings rebagged, then making a price adjustment for another patron who called him over.

Putting together the new store, a few hundred feet east of the spot where the bulldozer took out his grandfather’s market more than 40 years ago, required a lot of help. New York kicked in a $1 million grant; Syracuse offered tax breaks worth $120,000 over seven years. The New York Healthy Food and Healthy Communities Fund, created by Gov. David Paterson in 2009, arranged for $300,000 in financing. That fund was set up to support projects that could bring healthy foods to neighborhoods like the Near West Side.

The redesigned store is brighter, larger, and gives priority to healthier foods that fit a variety of ethnic tastes. Nojaim hadn’t considered it before, but the entryway to the old store was an invitation to obesity and poor health.

“A year ago, you would have entered into 60 feet of potato chips. Now you enter through produce, and you exit through produce. The more I learned about nutrition, I looked and said, ‘Look at how my store is set up!’”

Next on tap is a rewards card to help promote healthier choices and give incentives. 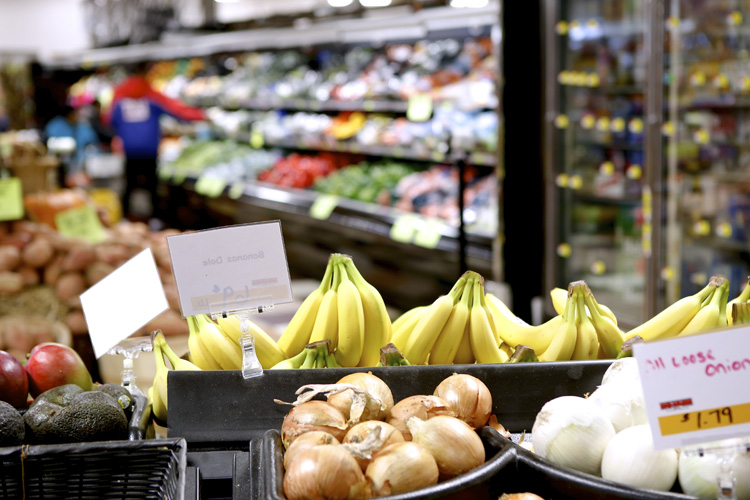 “You’re gonna get sales prices based on your health … I’m a capitalist, and I believe that people should make their own choices. I could make this easy, just by carrying the stuff I like to eat. We try to inform people. It’s your choice, it’s your money, do whatever you want with it. If we do it right, we won’t lose sales, and we might help improve people’s health.”

He has teamed with St. Joseph’s Primary Care Center West, which sits just at the edge of his parking lot, to develop technology to help patients learn what foods will keep them healthy. Soon, for example, a diabetic shopper will be able to scan a bar code and learn which syrup better suits his condition and then download a coupon electronically.

Nojaim would like to see some changes in the selections afforded to a person buying food with food stamps.

Nojaim would like to see some changes in the selections afforded to a person buying food with food stamps (formally known as Supplemental Nutrition Assistance Program, or SNAP). If the food has no nutritional value, he argues, why should it be paid for by a government nutrition program?

Six of every 10 dollars that pass through his cash registers come from food stamps and related programs, and food stamps suffered a 6 percent cut nearly two years ago.

“Half of our sales come on the first of the month,” he  says, the date when the plastic debit cards for benefit programs recharge. “We need to do enough volume then to cover expenses for the whole month.”

Why not, he asks, have the benefit cards recharge weekly – he could spread out his sales, and people could buy more produce.

“Shelf life,” he  says, holding up a yam weighing almost a pound. “When you buy once a month, you have to think of things that won’t end up in the dumpster.” 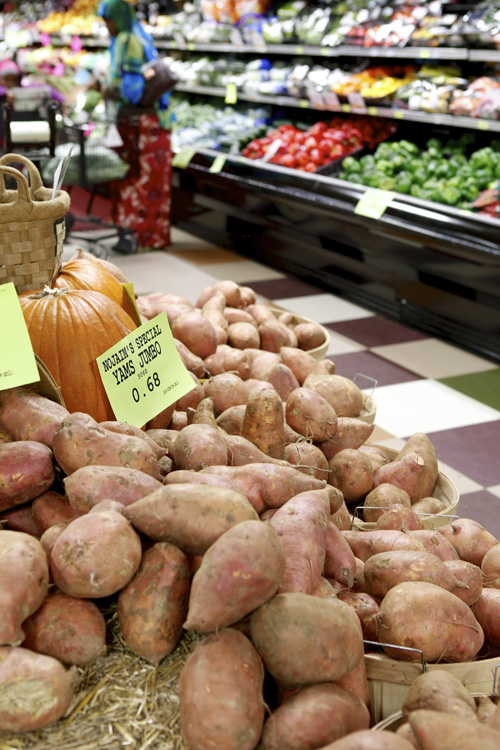 “When you buy once a month, you have to think of things that won’t end up in the dumpster.”

Ninety-five years ago, when Richard Nojaim, Paul’s grandfather, opened the first Nojaim’s, it was one of many markets in a thriving neighborhood. Families packed into apartments and two-story homes walked to work in factories along West Street, Fayette, and Geddes. Nojaim’s father, Charles, ran the business for decades, passing it from his father to his son, who has operated it since 1988.

Nojaim’s first experience in the food business was as an 8-year-old delivering groceries in boxes out of the back of his uncle’s car.

He recalls that on some days they would deliver as many as 300 boxes of food in the neighborhood. In the early 1960s, South West Street was widened as part of a plan, never executed, to connect Interstate 81 with Interstate 690 by means of an arterial cutting through the neighborhood.

The population of the city and the neighborhood is shrinking, and consumers, the loyal McDonald notwithstanding, have other options.

“When you lose 30 percent of your population, that’s one out of every three sales. There are less people willing to come in to the neighborhood, but people can leave,” he  says.

A few years ago, the demographics and financial pressures left Nojaim facing the choice of expanding or losing the business. He chose to expand.

It comes down to people like Ms. McDonald. Her relationship with Nojaim’s goes back before his time. While she sings the praises of Paul Nojaim and his newly renovated store, the grocer says he can’t take credit for her loyalty. 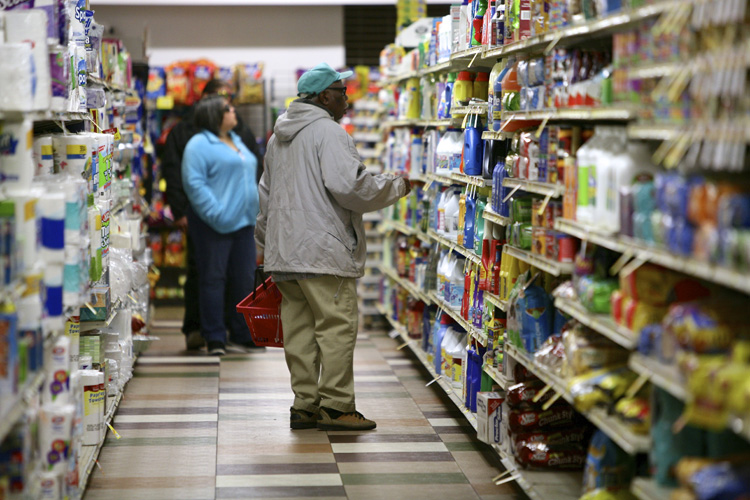 A few years ago, the demographics and financial pressures left Nojaim facing the choice of expanding or losing the business. He chose to expand.

“That relationship goes before me,”  says Nojaim. “My dad and grandpa believed that we had a relationship with the community, one that works both ways. We do what we can do, and when we can’t, we can’t.”

McDonald can’t remember a time when the Nojaim’s have ever  says no.

“When I walk in the store, I see a newness. We’re rising with the times,”  says McDonald. She’s happy to see the store bustling. “There has been a lot of improvement in the store. To look around and see this is an awesome thing.” 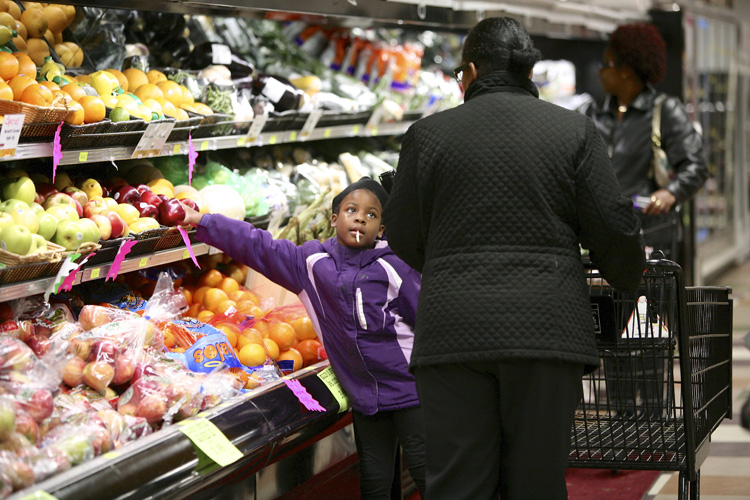 “There has been a lot of improvement in the store. To look around and see this is an awesome thing.”

They live in what are called food deserts. Lacking transportation and living on fixed incomes, they spend most of their money on processed foods in corner markets where fresh produce, even fresh meat, is uncommon.

“The reasons they have food deserts is not because of what people think,” says Paul Nojaim.

It’s not just because people have little money to buy food. He says that government regulations and industry practices have favored the megastores by killing off wholesale traders. Wholesalers made family grocery stores competitive; now big chains are their own wholesalers and stores like his must fend for themselves. Most fail.

“I couldn’t buy container loads,” says Nojaim, “but with local wholesalers, we could do that. We would co-op before the word existed. We would make strategic relationships with warehouses and wholesalers.”

With the end of wholesaling, he has had to create business alliances. Nojaim’s joined with 150 other grocery stores in three states to create their own brand –Shurfine — and operate their own warehouse in Olean.

As part of the expansion of the building, he has for the first time a storage freezer (filled with turkeys), which allows him to make larger purchases when prices are right. 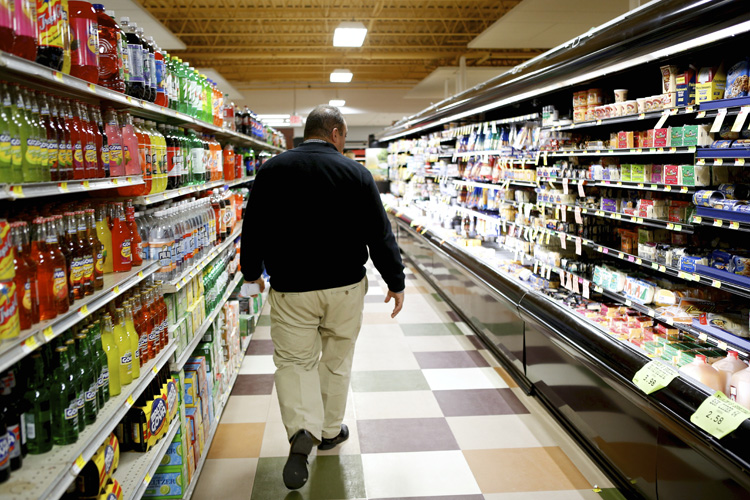 Government regulations and industry practices have favored the megastores by killing off wholesale traders.

The New Times will update two other attempts to bring food options to the inner city: The dormant Eat-to-Live Cooperative, on South Salina Street, and the plan, proposed by Jubilee Homes five years ago, to bring a supermarket to South Avenue.

Memories of Thanksgiving Past
News and Blues
To Top