What a great country.

Julio is the “beer ambassador” at the Sunoco station on East Seneca Turnpike. Julio clearly loves his work, and he does more than fill you up; he makes it an experience. He’s got the whole ritual down. He rinses out your growler as he talks you through the different brews Sunoco has on tap. He makes sure to punch your frequent-drinker card and is genuinely happy when you fill up the card and the beer is on him.

This week I got to choose among Blue Moon Belgian White, Magic Hat Single Chair, Arrogant Bastard ale, Saranac Caramel Porter and Angry Orchard hard cider which, IMHO, belongs in the fruit juice aisle. Julio keeps the conversation mellow as he slides one end of a piece of hose onto the tap nozzle and the other into the growler. He opens the tap, lets it flow and knows just when to shut it off (after the foam has spilled over) and how to turn the bottle so it settles down and fills right to the brim. By my lights, Julio is a genius. 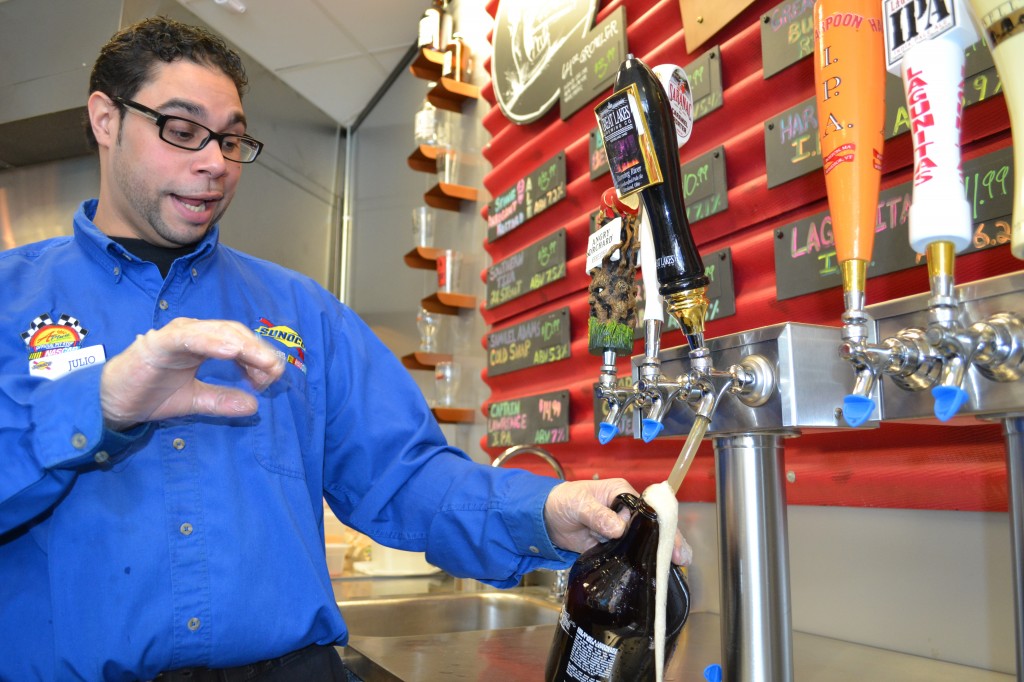 Julio is the “beer ambassador” at the Sunoco station on East Seneca Turnpike.

Could it be coincidence that the price of gas began to dive just as the popularity of the gas station growler climbed? Draft beer hauled home in a bottle from the gas station is a brilliant invention, though not without its potential perils. And now that gas prices are down, the beer is essentially gratis.

It was just last fall that I could give the cashier a pair of twenties, and if the car only took $38.50 in gas I’d grab a chocolate milk and we’d call it even. Now I can smile and say to Julio, “I’ll take my change in IPA.”

Since the advent of gas station growlers, I have made it my custom to stop at the APlus maybe once a week, gas up, and peek in and see what Julio has on tap.

The growler goes from $8.99 to $13.99, depending on the brand. Gas has dropped from nearly four bucks to two and a quarter. So let’s do the math. If I put 16 gallons in the tank, I’m saving $28. Filling up once a week, I can get at least two, maybe three growlers for free. We are talking free beer!

Economists are saying that currency traders, Saudi princes, the oil companies and whoever that sweet man was who invented hydrofracking have all teamed up to lower gas prices. All I can say is thank you, thank you, thank you Julio. What you have created is nothing short of miraculous. All those other news outlets have missed the real story — it’s not cheap gas, it’s free beer.

Better than manna from heaven. It’s the miracle on Seneca Turnpike. The Sunoco station is the fountain of youth. Julio defies all the laws of physics. He could bring Christopher Hitchens back to earth, suddenly willing to believe in God. For every gallon I pump, I get more free beer. Clearly I need to get a bigger car.

Then along come the Democrats trying to snatch that craft brew right out of my hand. Talk about arrogant bastards. Rep. Earl Blumenauer of Oregon wants to interrupt my party by adding 15 cents to the federal tax on gas, which has been 18 cents a gallon since Bill Clinton raised it in 1993. (It was also raised by Eisenhower, Reagan and the first George Bush.) Blumenauer and his crowd of sourpusses keep yakking about crumbling infrastructure and global warming. Whatever. Here at the APlus Sunoco on Seneca Turnpike, Julio keeps everyone happy.

No way am I going to let them tax my free beer away. At fifteen cents a gallon of gas, that would mean that those greedy bureaucrats are taking $2.40 from me each time I fill up. Remember those two free growlers? They add up to a full gallon (128 ounces) of free beer. Before opening the second growler, I did some quick math, and it comes down to this — to fix all those highways, the government wants to take from me what amounts to about 12 ounces of beer. An entire glass of beer each time I fill up.

I’m not buying it. If you thought the Tea Party could put up a fight, you haven’t seen anything yet. The Beer Party is rising. If you want my free beer, you will have to pry it from my cold dead hand.