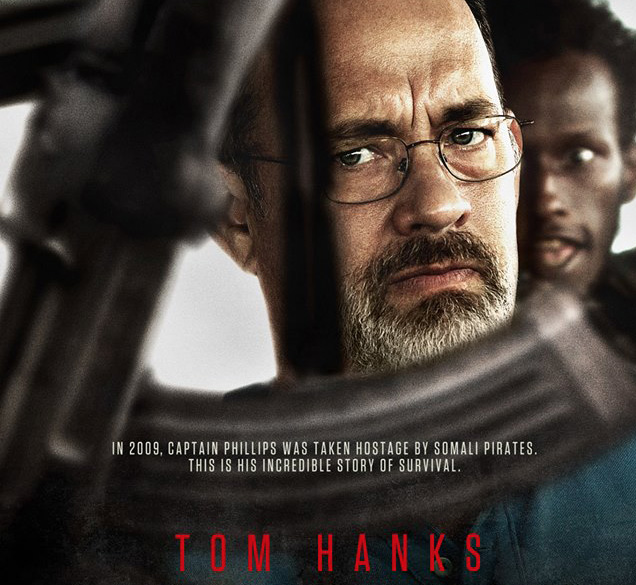 Pirates might be even more scary without that eye patch.

Trailers for “Captain Phillips” show the tense tale of the 2009 on-the-seas hijacking of the freighter Maersk Alabama. Tom Hanks plays the real-life captain, Richard Phillips, as he attempts to stave off the Somali pirates who snake their way onboard. Barkhad Abdi looks absolutely chilling as the spindly leader for the pirates.

Director Paul Greengrass makes you feel like you’re out there on the water. I subconsciously reached behind my ear to check for a Dramamine patch. Considering that the Maersk Alabama is the first U.S.-flagged cargo ship to be hijacked by pirates in 200 years, the U.S. Navy gets involved.

Also opening this weekend is “Machete Kills,” the sequel in which Danny Trejo plays a swashbuckler of a whole other stripe. Machete is hired by the president to take down bad guys below the border. It’s the follow-up from Richard Rodriguez to the 2010 action flick that introduced the mean-and-tough former Federale.

As the trailer unspools, you can flinch, and you can laugh. The president is played by a guy announced as making his debut, one Carlos Esteves. Yup. That’s Charlie Sheen. Mel Gibson plays the bad guy. Sofia Vergara is around to scream and turn heads. Lady Gaga has a role, looking not much like Madonna in “A League of Their Own.”

Yes, indeed, America was ready to watch Sandra Bullock get stranded in space.

“Gravity” turned in a blockbuster opening the weekend of Oct. 5, grossing a whopping $55.8 million, according to boxofficemojo.com.

The other opener of note, “Runner Runner,” slinked in at No. 3, pale in comparison for the tale of Internet gambling intrigue featuring Justin Timberlake and Ben Affleck, with a gross of $7.7 million.

In between was the sci-fi computer animation of “Cloudy with a Chance of Meatballs 2,” with a gross of $20.9 million, bumping its overall gross to the quite sunny $60 million.