When ironist Paul (James Uva) and more reflective Dave (Sean Pratt) begin the action by licking the shaft of a bong to see if you can taste the plastic, it feels as though we’re starting a slacker comedy in Jump/Cut, which runs through Saturday, Feb. 15, at Central New York Playhouse. Playwright Neena Beber, a former television writer, who premiered Jump/Cut in 2003, is just being coy with us, however.

The boys are really exploring the nature and the taste of experience as raw material for art. Both hunger to create: Dave as a novelist and Paul as a filmmaker. The film (actually video) that Paul makes of Dave unfolds before our eyes and then is projected above the players at the rear of the stage. Reconciling what the live characters say before us and what their projected images say is much of what Jump/Cut is about.

Almost immediately, we fast-forward to the boys’ college years. “Fast-forward” is, of course, a film term, and the play is suffused with them, beginning with its title, the name for the editing process of startling discontinuity. Director Dan Rowlands underscores the links to cinema language by having his characters appear in a sequence of witty T-shirts. Paul wears one with a mug shot of a trim, 25-year-old Orson Welles, whose caption reads, “Know-it-all.” Dave’s T-shirts signal a mordant strain, such as, “Don’t trust atoms: They make up everything.”

At the beginning when both Paul and Dave looked like stoners, we could shrug off certain procrastination, but increasingly we see that Dave’s problems are not going to be shed with casual effort. His inaction is not fecklessness or garden variety writer’s block, as he reaches out to Paul: “You gotta keep me off the ratty couch and make sure I don’t become a bum.”

Away from the slovenly apartment, Paul runs into Karen (Crystal Rowlands), a former scriptwriter now devoted to an obscure academic specialty: hagiography. “Study of hags?” Paul asks. She’s crazy about Dostoevsky and badgers Paul into reading one of his heavy tomes, significantly, The Idiot. Even more usefully, she provides a list of well-known artists who suffered from manic depression.

Soon Karen moves in with Paul, which also means she moves in with Dave. The physical contrast alone is enough to define her. Paul and Dave are round-faced guys with capacious bellies, while Karen is a light-footed sylph who could easily wend toward either fellow with just a breathy gust of emotion.

When Paul comes upon Karen and Dave embracing, he asks, “You two are not having an affair?” Dave, who usually gets the better lines, responds, “You must be asking, ‘Not having enough air?’”

We know by this time that Dave has severe problems; he’s not just manic depressive but bipolar as well. In one of actor Pratt’s bravura scenes, Dave goes off on a wild paranoid rant about CIA spying, phantom threats and hidden dangers–and then snaps out of it to rejoin the sane world.

Despite Paul’s immersions in the cinema and his goal to achieve mastery, the idea of filming Dave comes out of a dialogue with Karen. Further, when one considers how central that film is to the entire play, it’s odd that the making of the film does not begin until an hour into the action.

There’s nothing revolutionary about having characters from the stage production appear in films or videos projected during the action we are watching. Rather than the artistically composed frames of a master director that Paul says he wants to be (Orson Welles? Terrence Malick?), most of the footage is made up of front-on head shots as one would find on Skype, only sharper. When these projections are running, the players must freeze in place, inviting us to ignore their presence in favor of the screen. A device that slows the action, this begins to feel like the neglected innovation of Eugene O’Neill’s Strange Interlude (1928), where the cast holds their positions while one character articulates private feelings he or she would not say aloud.

Paul and Karen struggle to grasp Dave through friendship and love, and labor to portray his deterioration by filming every minute of his life. Through them we learn the depth of Dave’s descent. For all that wit (“Where’s your bourgeois de vivre?”), Dave is not going to heal himself and the other two cannot initiate therapy. Playwright Beber is helping us to see Dave not as a victim but rather as a tragic figure.

Director Dan Rowlands, who reportedly has been planning Jump/Cut for several years, has wanted Sean Pratt for the role of Dave from the beginning. In the second act it’s easy to see why, given Pratt’s compelling portrayal of raw emotion. 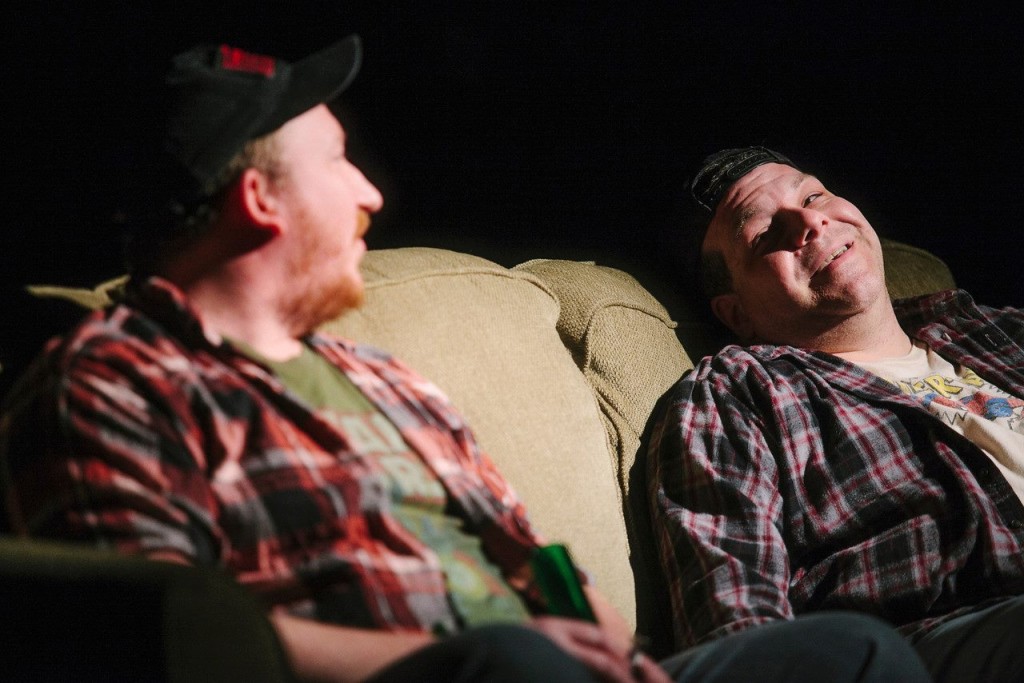 James Uva makes Paul the guy you can trust. His amiability shines on stage, but his concern, and eventually his deep empathy, are more articulated on screen. Crystal Rowlands has the right intensity for the focused and cerebral Karen, but her muted projection robs us of too many words, especially in the second act.

Central New York Playhouse continues to bring us shows nobody else does, like Spamalot or a live-action version of Reservoir Dogs. Beber’s Jump/Cut is the type of provocative, idea-packed drama that the adventuresome seek out off-Broadway but that we don’t expect to get to see in the Salt City.

Life is Her Cabaret
Crowning Touches
To Top