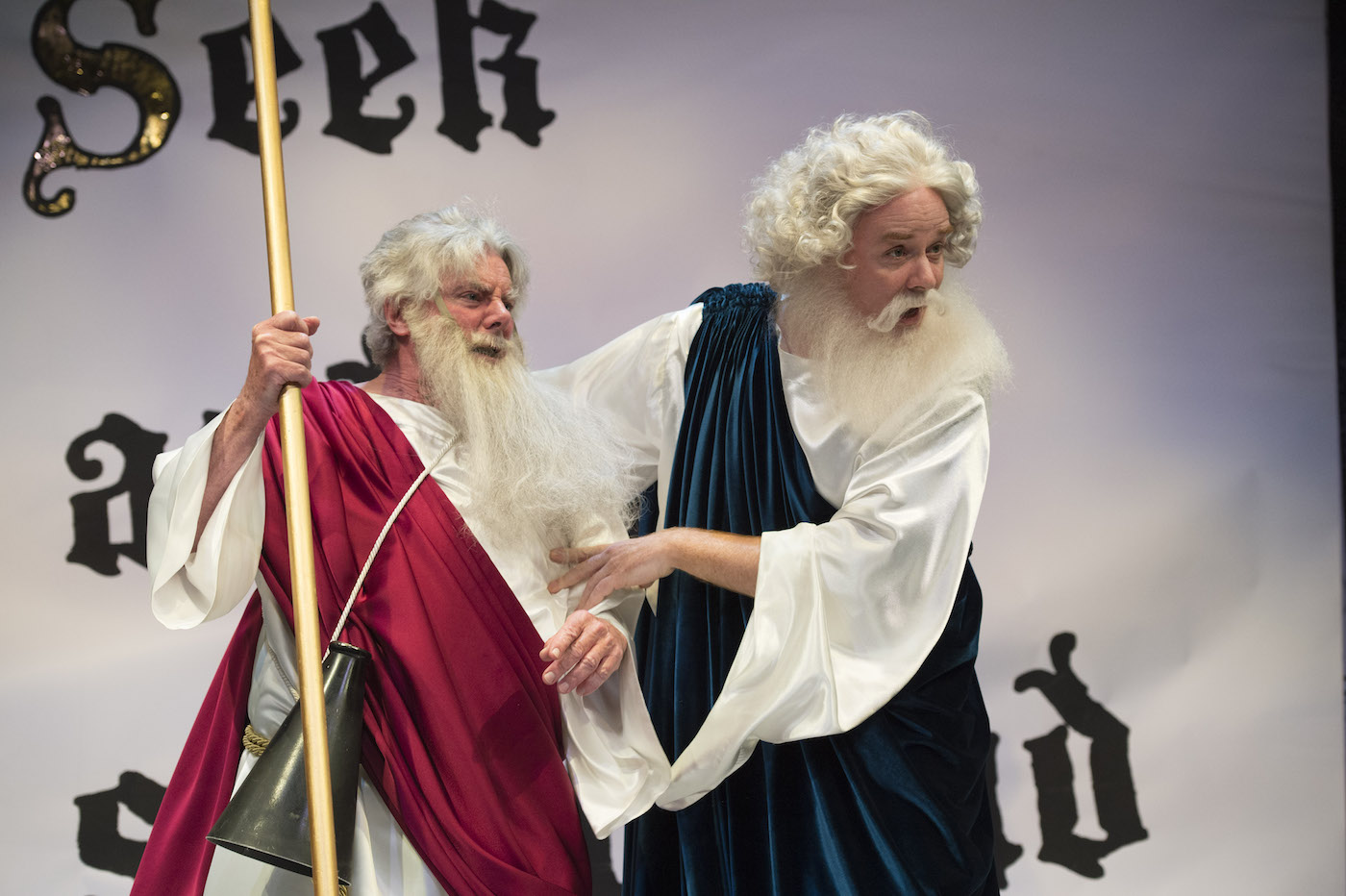 Shaw Fest strays from the playwright’s name it originates from, yet keeps his spirit alive.

This summer is the 14th and final year in the tenure of Shaw Festival artistic director Jackie Maxwell. The Canadian festival at Niagara-on-the-Lake, Ontario, had moved away from lockstep worship of George Bernard Shaw before she arrived. But his presence is still felt.

Maxwell slotted two Shaw items with a feminine perspective: the little-seen Mrs. Warren’s Profession and a stage adaptation of a prose work, The Adventures of the Black Girl in Her Search for God. For balance she saved space for arch-misogynist August Strindberg’s The Dance of Death.

As the first non-Canadian in charge, Maxwell has also loosened festival Anglophilia by programming works by the South African Athol Fugard, Master Harold … and the Boys, as well as two Americans, Thornton Wilder’s Our Town and Stephen Sondheim’s Sweeney Todd, one of the summer’s biggest hits.

Yet what keeps the audiences coming are the plays that the Shaw Festival does best and that are neglected elsewhere. That means works hewing close to the festival’s one-time charter, of either being by Shaw or from his lifetime, 1856-1950, this year meaning Oscar Wilde, W.S. Gilbert and Anton Chekhov. 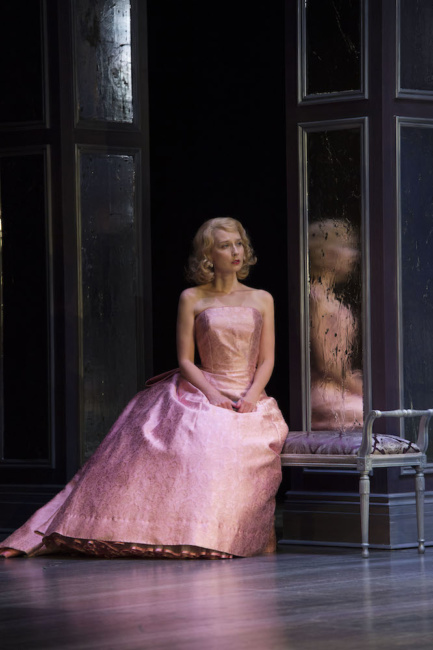 Julia Course in A Woman of No Importance. David Cooper photo

In recent summers posh productions of Wilde’s stylish comedies in the 869-seat Festival Theatre have been the biggest draws. A Woman of No Importance (through Oct. 29), generally thought to be the weakest of Wilde’s major works, is more of a risk. The long, chatty first act may contain some of his more glittering epigrams (“The English country gentleman galloping after a fox: the unspeakable in full pursuit of the uneatable.”) but it takes nearly an hour for us to be involved in the plot. As in so many Wilde plays, the central issue is the damaging exposure of a significant secret.

Under Eda Holmes’ luminescent direction, all that chitchat simply glitters, and we become more aware of Wilde’s rapier-tipped satire of the ways in which the guests, mostly female, seek higher ground for themselves on the verbal battlefield. The festival’s repertory company boasts seasoned young professionals who really know how to talk the talk.

Tall, sleek Martin Happer as Lord Illingsworth gets many of the lines that Wilde himself would have said if he were in the company. Gimlet-eyed Diana Donnelly as the alternately flirtatious and stinging Lady Allonby is Illingsworth’s most able sparring partner. Company veteran Mary Haney, who has taken different roles in earlier revivals, can draw blood as the pugnacious reactionary Lady Pontefract.

Stealing laughs with a different approach is the dense, Malaprop-like Lady Hunstanton, played by dainty Fiona Reid, known to wider audiences as the Anglo mother in My Big Fat Greek Wedding.

Dark-browed Fiona Byrne playing the title character, Mrs. Arbuthnot of reputed no importance, does not appear until the end of the first act but quickly takes charge of the stage with an unvarnished moral clarity that chic and shallower characters lack. Her rescue of her son Gerald (Wade Bogert-O’Brien) from fashionable exploitation reminds us that Wilde’s heart also dreaded the esteem of the beau monde he sought in life.

A Woman of No Importance opened in 1893, but designer Michael Gianfrancesco has moved the action ahead 60 years to 1951, the year that the Conservative victory curtailed British Labour Party austerity. The sets and costumes, like ballerina-length gowns, are inspired by Cecil Beaton’s period photographs. 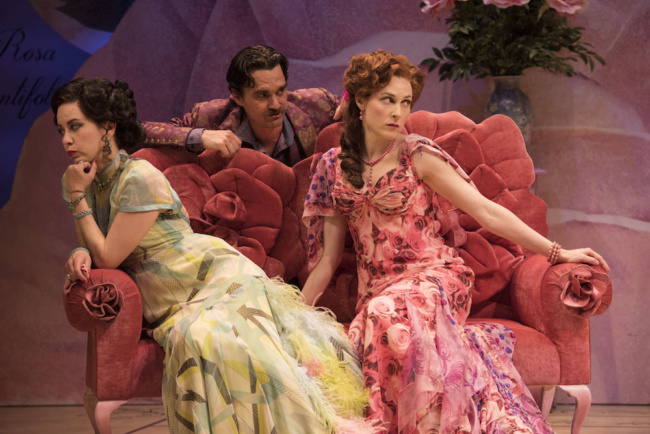 The second comedy at Niagara-on-the-Lake, produced in the 328-seat Royal George Theatre, delivers more laughs-per-minute than Oscar Wilde, quite a boast. It’s W.S. Gilbert’s forgotten hit of 1877, Engaged (through Oct. 30). Gilbert, without Sullivan’s music, wrote nearly 50 works for the stage, of which this was far and away the most successful.

An ambitious program note describes it as a “biting satire,” but don’t be misled. What we have here is a cleaned-up sex farce without slamming doors. Instead of the lust favored by French farces, Gilbert focuses on the wish to get married and then mistaken geography — if not mistaken identities.

The action begins along the Scottish border, where lovers could flee to a village called Gretna Green to arrange quickie marriages, no questions asked. English couples wedding just outside the village would find the contract void when returning home. Scotland comes off as a rough backwater. One lovely Lowland lass, Maggie (Julia Course), speaks in a nearly incomprehensible brogue and covers her arms with tattoos, like a Caledonian Maori.

Stranded in Scotland when his train is vandalized is a wealthy young man-about-town named Cheviot Hill (Gray Powell). The name makes wordplay on an actual range of hills along the border. When he learns that brown-haired Belinda Traherne (Nicole Underhay) is about to be forced into marriage with the blowhard Major McGillicuddy (Ric Reid), Cheviot rescues her with their own nuptials somewhere near Gretna Green. Cheviot comes with two character traits designed to be springboards for laughter. He’s surprisingly stingy for a romantic leading man, and he wants to marry every woman he meets, including red-haired Minnie (Diana Donnelly) and tattooed Maggie.

Directing this Gilbert revival is Canadian comic playwright Morris Panych, whose work has been performed in Central New York. Over several summers his shows have moved fast and punched hard. In a characteristic moment, Belinda tries to gobble down all the sweets from Minnie’s serving dish, a scene stolen and toned down in The Importance of Being Earnest.

Drawing smaller audiences but generating some of the sharpest comments is a 45-minute one-act running through Sept. 11 in the 11:30 a.m. lunchtime slot at the 328-seat Court House Theatre. Shaw published a tendentious short story titled The Adventures of the Black Girl in Her Search for God in 1932, causing immediate outrage among his religious friends.

Following an outline suggested by John Bunyan’s Pilgrim’s Progress, a guileless but curious African convert to Christianity seeks out figures from the Old and New Testaments, as well as skeptical commentators on those texts. The play reflects what critical biblical scholarship had revealed by that time, such as two “Gods,” the first being the angry, vengeful Deity of The Book of Job.

Lisa Codrington, a Toronto-based author of African heritage, has adapted Black Girl for the stage with plenty of metatheatrical, site-specific barbs for the Shaw Festival itself and Niagara-on-the-Lake and its celebrated fudge shops. Her efforts are enhanced by congenial director Ravi Jain, a specialist in the works of explosive, Nobel Prize-winning Italian comic playwright Dario Fo. Indeed, Codrington’s Black Girl feels like a wall-breaking Fo comedy. She makes Shaw (played by Guy Bannerman) a character in the action, whom the Black Girl of the title (Natasha Mumba) refuses to allow to read his pedantic Preface, giving away all the play’s secrets.

Camellia Koo’s set for Black Girl initially looks like a plain, black, raised platform. When the top panel is lifted, the whole is revealed to be the Bible, now opened to Matthew Book VII and the passage, “Seek and ye shall find.” Across the top of the pages march some self-assured shouters, such as Micah the Morasthite (Ben Sanders), while from its unopened pages wriggle out some characters Shaw did not think of, like the Black Mamba Snake (Kiera Sangster). 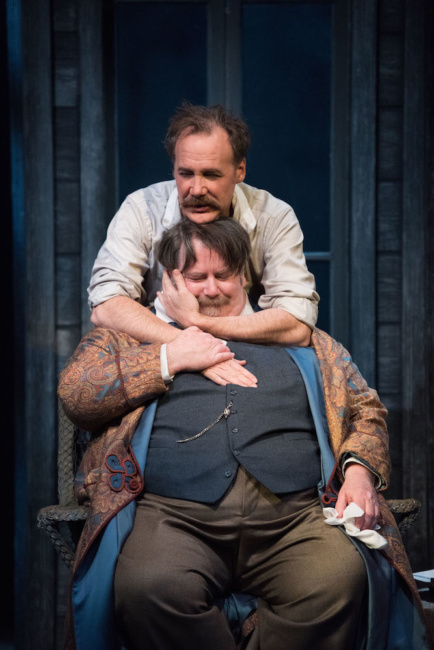 The works of Shaw’s Russian contemporary Anton Chekhov have long been featured at the Shaw Festival, usually with an innovative twist. At the Court House through Sept. 11, Uncle Vanya, about unrequited love and unappreciated sacrifice, is arguably the master’s most transparent and accessible serio-comedy.

It is even more so in this new adaptation by hot young American playwright Annie Baker (Circle Mirror Transformation), often compared with Chekhov herself. While some of her colloquialisms can be jarring, e.g. “I hang out with creeps,” her version restores some of the discomfiting laughter that observers noted in Konstantin Stanislavski’s original 1899 staging.

A self-absorbed but oblivious academic, Serebryakov (David Schurmann) has lived off the profits of an isolated farm run by his brother-in-law Vanya (Neil Barclay) and spinsterish, plain daughter Sonya (Marla McLean). The professor arrives with his gorgeous, young second wife Yelena (Moya O’Connell) and announces he’d like to sell the place, getting a better return by investing the proceeds of the sale in the stock market. Astrov (Patrick McManus), a witty, middle-aged local doctor, and Vanya himself, are in love with the young wife, Yelena. Sonya’s love for Astrov is just as hopeless as is the men’s.

Despite Chekhov’s enormous cultural esteem, there are not many opportunities to see his work performed. This production of Uncle Vanya would have to rank near the top of them.

George Bernard Shaw’s Mrs. Warren’s Profession is best known for causing a scandal and being banned. Yes, Mrs. Warren was a prostitute and as the action of the play begins at the Royal George Theatre (through Oct. 23), she still runs a chain of brothels, subjects never specifically cited in the dialogue. It is also one of Shaw’s very earliest works, 1893, and suffers from heavy-handedness and clunkiness. There is little of the author’s famed wit, prompted by learning from his contemporary Oscar Wilde.

Director Eda Holmes reminds us that because of the censor, Mrs. Warren was first staged informally at London’s New Lyric Club in 1902. Her conceit is to employ a duplicate of the venue and move the time forward a century. Thus several characters wear jeans, and we hear interludes of rock music.

Ever the Fabian Socialist and champion of the “New Woman,” Shaw thinks prostitution is all about economics and has nothing to do with male lubriciousness or female culpability. The title role of the embattled Mrs. Warren, often thought as one of Shaw’s best for a woman of a certain age, was slated for Nicole Underhay of Engaged but taken on during one performance by understudy Fiona Byrne of A Woman of No Importance. The ending is dominated by Mrs. Warren’s vengeful daughter Vivie, a breakthrough for Jennifer Dzialoszynski, who appears in walk-ons in other productions.

Niagara-on-the-Lake, one of the most exquisite patches of urban real estate in North America, lies just over the border, about 135 miles from Syracuse, and around three hours of driving time, if Customs officials are agreeable. A visit requires planning, not only for tickets, which can be scarce, but also for accommodations. Check Shawfest.com or (800) 511-SHAW for details.