I’m a curvy middle-aged head-turner who is looking for a new relationship with a licensed motorist who isn’t intimidated by a powerful presence. I have a huge body and a slight drinking problem, but I’m tons of fun. Literally. If you’re tired of cheap, immature, plastic types and ready to cruise down Large and Lovely Lane, we should talk.

Wanna hear more? My name is Electra 225. I was born into the prestigious Buick family in 1969. You do the math. I’m a California girl through and through. I’m 18-and-a-half feet long (225 inches) with Mocha-colored skin and a leathery seat. My internal clock is stuck at 11:18. so I tend to run late. My factory radio doesn’t work either, but turn my key and you’ll hear the sweetest music there is: the low, sexy rumble of my rebuilt 430. I sound like a love child of Barry White and the USS Nimitz.

Did I mention I like to go topless? A lot?

You’re probably wondering: Why is a California princess reduced to running a personal ad in an alternative weekly in Syracuse, N.Y.?  Gimme a (drum) brake. We all hit a bump in the road now and then. My bump was Kramer.

I hooked up with him in 2000 out in Newport Beach. I was living with another guy then. I don’t recall how many guys there were before that. Two. Four. Ten. Who knows? Times were different, especially back in the ’70s. It’s all a blur.

Anyway, I’d heard rumors that Kramer was really hoping to score a classic pickup, but he seemed nice enough, so I let him take me home. He would park me in his garage out of the sun’s glare and lovingly polish my fenders. He’d drive me to work or to the beach to show me off. He even took me to Vegas. I liked him, or thought I did. I liked his dog, Nate, too. Not so crazy about the wife, however. She seemed afraid of me –  like I might explode at any moment.

OK, I did explode. Just one time. On Interstate 5 en route to Dodger Stadium. It was just a minor seizure. No biggie. Wanna know how Mr. Local Celebrity Jeff Kramer reacted? He blamed the victim. He locked me in that garage for nearly a year and inflicted upon me the most abusive language imaginable. Finally, he scraped together enough money to get my engine rebuilt … by a complete moron. Had Kramer or his ace mechanic listened to me, they would have heard me shouting, “Guys, guys! You’re putting the connecting rods in backwards!!!” They also would have heard me screaming that one of the rods was the wrong type, which condemned sensitive inside parts to being chronically starved for oil. 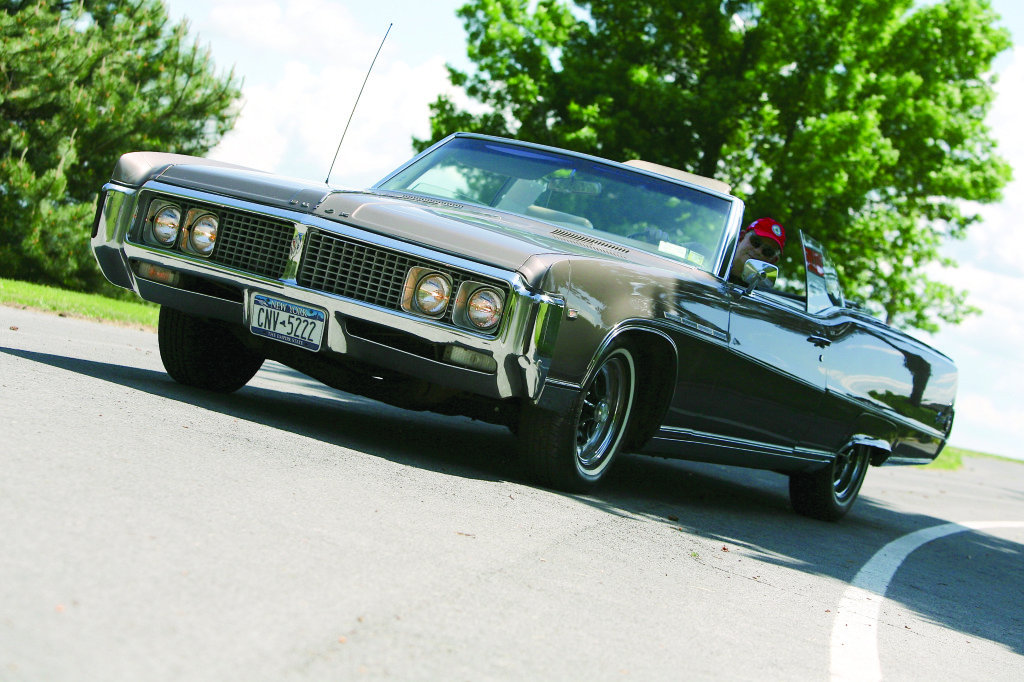 I sucked it up. I dug deep into my proud GM heritage, and I made that misrepaired engine work. In 2003, when Kramer moved me to Syracuse, I stoically spent winters in the garage – I still haven’t seen snow; Give Kramer credit for that — while in summers I provided miles of trouble-free service until I overheated in the Gay Pride Parade. (Who didn’t?) Also, I sort of had another seizure, this time on Route 20 in Lafayette.

This time the rebuild was done by Fehlman Brothers on Midler Avenue. They’re not cheap, but they know how to treat a lady. That was six years ago, and I’ve never felt more awesome. I am Buick. Hear me roar.

Like most gals of a certain age, I can be temperamental. Sometimes I want to drive myself back to California and put that mechanic’s liver in backwards just to see how he likes it. But I always cool down. I had my fan shroud replaced!

Now it’s time to replace the man in my life, so I can roll down life’s highway with someone who understands me or at least who can tighten a freakin’ battery cable without calling AAA. (It’s called a wrench, Dumbass. Look into it.)

See, these days Kramer would rather ride his stupid bicycle all over town like a circus chimp and kvetch about global warming than spend time with me. But I prefer to stay classy. Kramer and I have drifted apart, and that’s all you need to know.

That, and he has a tiny crankshaft.