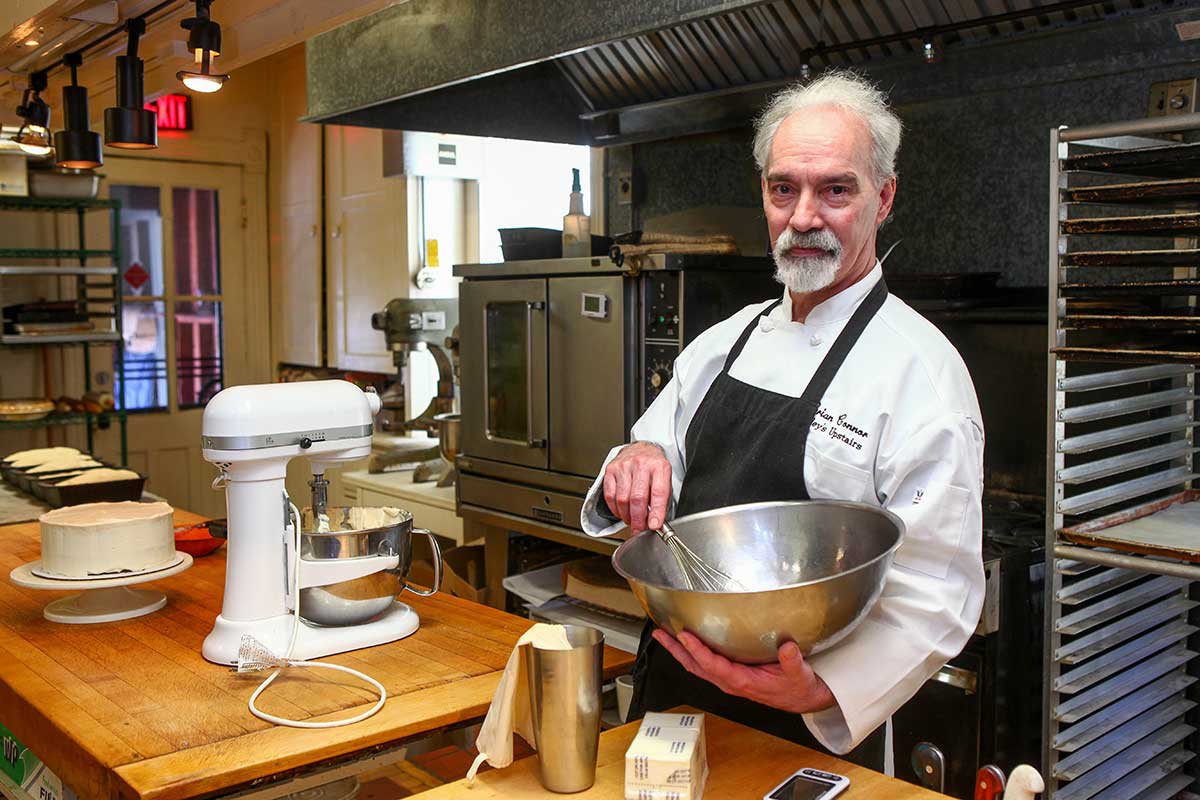 Is Riley’s on Syracuse’s North Side a bar restaurant or restaurant bar? Who cares — the dessert is great! Learn more about the man behind the frosting.

Riley’s, on Syracuse’s North Side, is noted for several things: its warm and cozy atmosphere, with low lighting, polished wood and vintage/antique decor; its owner, Terry Riley, who sits down at the upright piano just beyond the bar to play for guests on Saturdays; and its hand-printed menu that changes daily and spotlights creative entrees.

A recent evening featured lamb and rosemary ragout tossed with pasta and Schiller Pork, roasted pork loin rubbed with herbs and served over sautéed onions. The name is a reference to the city’s Schiller Park a block away.

Last but definitely not least are “Brian’s Desserts.” If you’ve been to Riley’s, you’ve seen the “Brian’s Desserts” blurb at the bottom of each day’s menu. Your server will describe them, but they’re also listed on a small chalkboard and visible under glass as you walk into the dining room. Tip: Go easy on the bread basket and save room for a sweet ending, with freshly whipped cream on the side.

“A lot of people look at the dessert board first and base their dining on what’s for dessert. That’s what people tell me,” says Brian Connor, the seldom-seen and soft-spoken baker of Riley’s desserts.

Owner Terry Riley confirms this. “Some people order their dessert before dinner,” Riley says. “They don’t eat it before dinner. But they want to know it’s going to be there when they’re ready.”

“I think we’re known for our desserts,” Riley adds. “They’re one of the things that keep people coming back.” 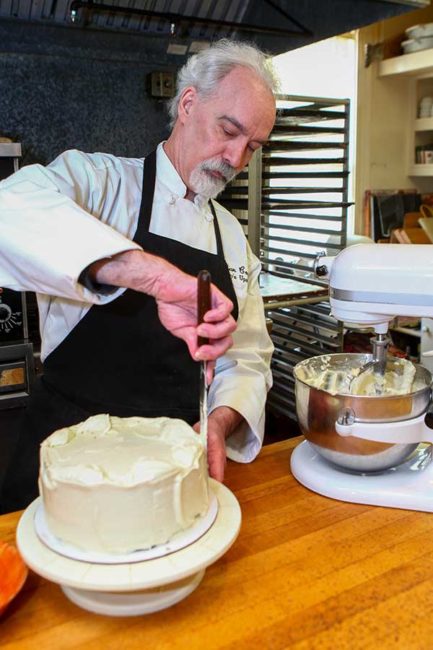 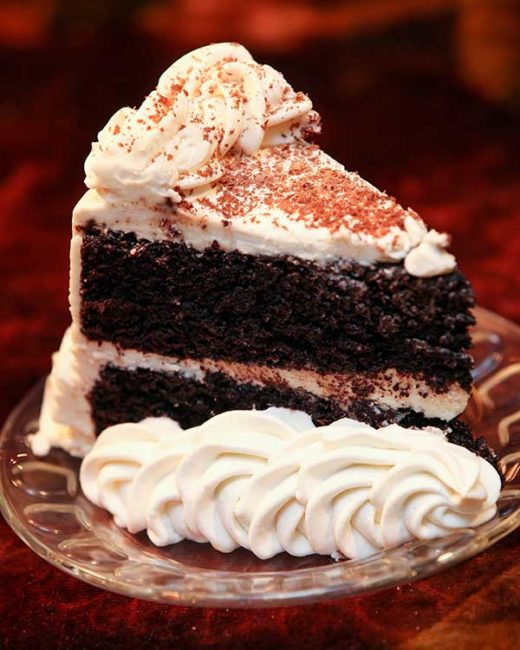 Whether you think of it as a bar with a good restaurant or a restaurant with a good bar, Riley’s is one of the oldest continuously operating taverns in Syracuse. The Haberle Brewery, one of dozens of breweries that once operated in Syracuse, opened a saloon there in 1897. A barbershop was once where the dining room is now, Riley says. He purchased the place in 1979 and has operated it as Riley’s ever since. The restaurant marks its 40th anniversary on March 15.

Improvements have been made, but the place hasn’t changed drastically over the years. The original bar is still there and the kitchen off the dining room is small by today’s standards.

Connor joined the staff in 1989. His baking kitchen is upstairs from the bar and dining room and shares space with a series of rooms used for private parties. Originally, the second floor had two apartments.

Like the bar and restaurant, the kitchen space is warm and cozy, with granite and stainless-steel prep areas, cupboards, mixers and both traditional and convection ovens within easy reach. A bookshelf holds some of Connor’s favorite volumes, like The Fannie Farmer Cookbook, The Silver Palate Cookbook by Julee Rosso and Sheila Lukins and The Cake Bible by Rose Levy Beranbaum.

Connor says he also finds inspiration in the pages of Gourmet, Bon Appetit and Cook’s Illustrated magazines and in the world of food and recipes online. “The internet is one of the best resources there is today,” he says.

Connor, 64, grew up in Central New York and studied history and psychology in college. Even as a kid, he remembers, he loved to watch his mother bake and was fascinated by how recipes come together and work.

He had several jobs before getting into baking professionally. Through one of them, he met a local caterer and “fabulous pastry chef” who was instrumental in getting him into the business. She was baking for Riley’s in the late 1980s; when she departed, Connor was hired to take her place. He and “Brian’s Desserts” have been there ever since.

Riley’s offers about five desserts each day, usually a pie, a cheesecake, a chocolate dessert (think chocolate layer cake, chocolate tart and chocolate truffle torte), a dessert made with nuts and a cream dessert. The cream dessert could be a cream pie or a mousse.

Connor describes the restaurant’s desserts as homey, comfortable and familiar, sometimes with a twist. “It’s kind of like diner desserts,” he says. “We’re not a fancy-schmancy place.”

Connor loves the endless possibilities for making things with flour, butter and sugar. The restaurant’s top-selling desserts are raspberry pie and anything made with chocolate. Desserts sell best on weekend nights, he says.

He stays fresh by looking for new things to make in addition to old favorites. His pie crust is a basic crust made with vegetable oil. “You really can’t screw it up,” he says. This time of year his pie offerings might include Crimson Pie (with oranges, cranberries and blueberries), a triple-nut pie with walnuts, pecans and almonds or an English cinnamon pie.

Sometimes, customers will make suggestions, as will Terry Riley, but Connor pretty much has creative license to bake what he pleases. All told, he makes about 30 desserts a week (not including private parties), as well as the restaurant’s bread. The house bread is a basic, rectangular white loaf, supplemented with Italian bread from DiLauro’s Bakery.

“Terry Riley is a great boss,” Connor says. “He encourages you to do whatever you want to do.”

At an age where some people might think about hanging up their apron, Connor says he has no plans to retire. “I love what I do,” he says. “I love working. I never want to stop.”