The Syracuse University football team got mad, and then it got even.

Angered and embarrassed by its 56-0 loss Oct. 19 at Georgia Tech, the Orange rebounded Nov. 2 with a 13-0 whitewash of the Wake Forest Demon Deacons at the Carrier Dome. The win evened the Orange’s record at 4-4 (2-2 in the Atlantic Coast Conference) and keeps the team on track for a bowl game.

With a bye week between the Georgia Tech and Wake Forest games, the Orange players had two weeks to stew over the 56-0 debacle, which was one of the most lopsided losses in school history.

“At practice this week, we were hitting harder, we were going faster and we worked harder. That was just the difference,” said freshman defensive end Isaiah Johnson, who had a key interception against Wake Forest. “You give us a loss and a bye week, that really builds up the momentum and the motivation because we were still mad. 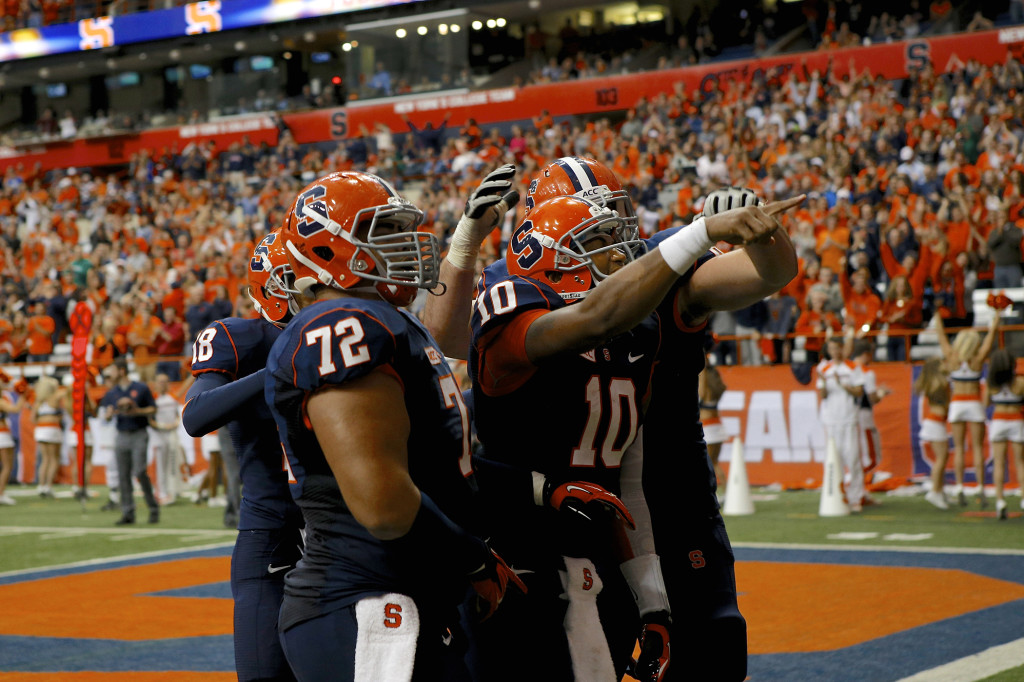 “You’d be naïve or blind to say we’re not looking down the road and what we have to do to get to a bowl game,” senior offensive tackle Sean Hickey said after the Wake Forest game. “We’ll probably talk about it in our meeting {Sunday, Nov. 3}, and then we’ve got to put all of our focus on Maryland.”

What the Orange lacked in grace they made up for in grit against Wake Forest (4-5, 2-4), which the week before led then-No. 7 Miami 21-17 with four minutes remaining at Miami before losing 24-21. With the Demon Deacons’ offense weakened by an injury to star receiver Michael Campanaro, the SU defense pitched its first conference shutout since 1996 by limiting Wake Forest to 213 total yards.

“I’m extremely proud of {defensive coordinator} Chuck Bullough and the defensive staff for the job they did coming off a difficult loss a couple of weeks ago where we were all embarrassed, starting with me,” SU coach Scott Shafer said. “We really challenged those kids to come out and play good football and they did, and I’m so proud of the way those kids played, the whole team, but especially the defensive kids.”

After a first-half Puntapalooza (a combined 14 punts and 14 first downs), the Orange scored two touchdowns within about three minutes midway through the third quarter. The Orange received the second-half kickoff, and quarterback Terrel Hunt capped a 75-yard, 14-play drive with a six-yard touchdown scamper.

About two minutes later, Johnson made the defensive play of the game when he tipped Wake Forest quarterback Tanner Price’s pass and then made a lunging catch for the game’s only turnover.

On the next play, Hunt handed the ball to running back Prince-Tyson Gulley, who pitched it to wide receiver Jarrod West on what appeared to be a reverse. Instead, West put on the brakes and tossed a 25-yard touchdown pass to wide-open freshman wide receiver Brisly Estime, who had nine receptions in the game to go along with his first career touchdown.

Shafer credited offensive coordinator George McDonald for calling the play after it failed–repeatedly–during practice the week before the game.

“That play all week really didn’t work that well. We actually had a couple guys trying out to throw the ball and I wasn’t one of them that completed it,” West said. “To get out there and complete the ball, I mean he was wide open and anybody could’ve thrown it.”

Although Wake Forest blocked punter-turned-kicker Jonathan Fisher’s extra-point attempt, the Orange led 13-0 after the West-to-Estime touchdown. That was plenty for the SU defense, which recorded two sacks and six hurries against Price, who completed only 22 of 54 passes for 173 yards after throwing for 301 yards and two touchdowns against Miami.

“I was really proud that our kids, they stuck their chest out, they went to work after that difficult loss,” Shafer said. “There’s been no separation with these kids. They’ve become tighter when we’ve had tough situations and I love them for it.” 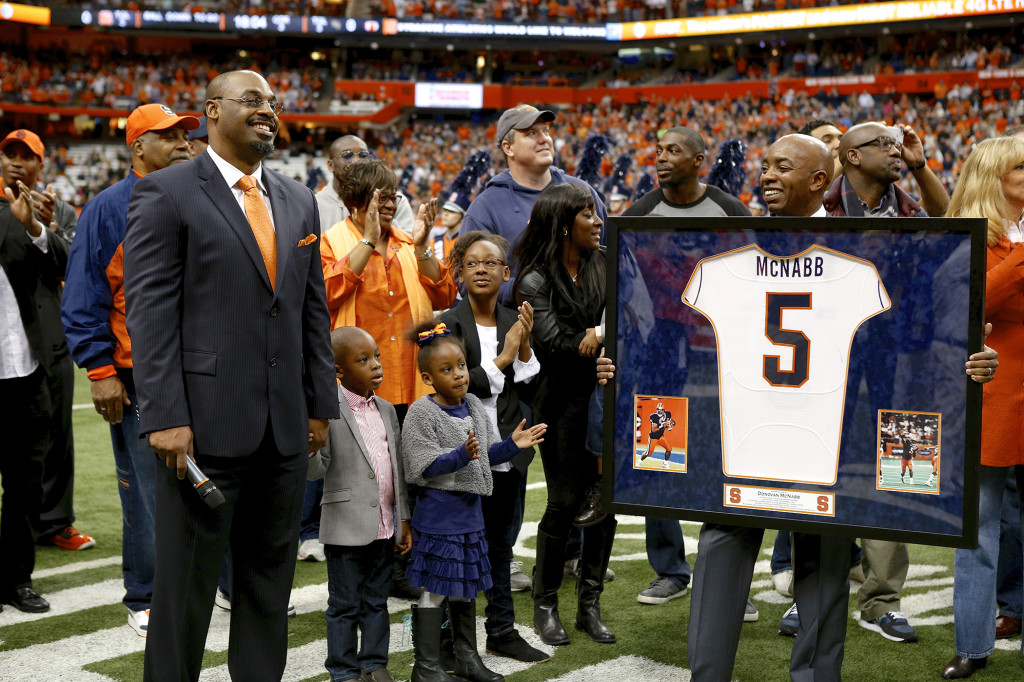 – At halftime, the Orange retired former quarterback Donovan McNabb’s No. 5 jersey. A three-time Big East Offensive Player of the Year for SU and an NFL star with the Philadelphia Eagles, McNabb is just the fourth SU player to have his jersey retired, after Larry Csonka (No. 39), John Mackey (No. 88) and Don McPherson (No. 9). No. 44 (Jim Brown, Ernie Davis, Floyd Little) is SU’s only retired number.

– Shafer said sophomore kicker Ryan Norton will return to the team this week after being suspended for the Wake Forest game for violating team rules. Norton started the year as the backup kicker but was elevated to starter in the third game after Ross Krautman suffered a season-ending hip injury.

A New Era for SU Hoops
The Other Guys
To Top