Chiefs’ Fans Get Free admission to the Hall of Fame Museum

It’s only fitting that in a summer when the first former Syracuse Chief of the modern area will be inducted into the National Baseball Hall of Fame (Bobby Cox), Syracuse fans can use a ticket stub from a 2014 Chiefs game for free admission to the Hall of Fame Museum on Fridays through Sept. 5.

The Hall of Fame is calling the promotion “Minor League Days,” and on Fridays the museum in Cooperstown will feature educational programs spotlighting the longstanding love affair between baseball fans and the minors.

The regular admission cost to visit the museum is $19.50 for adults and $7 for children 7 to 12. At about 90 miles away, Syracuse is the closest Triple-A or Double-A baseball city to Cooperstown.

“Many of the sport’s major-league fans come from communities served by minor-league teams,” said Brad Horn, vice president of communications and education at the Hall of Fame. “We love the stories of minor league baseball and their fans, and we look forward to celebrating them each Friday throughout the summer.”

There are minor-league artifacts throughout the Hall of Fame, including a ball from a 1952 game in which Ron Necciai recorded 27 strikeouts in nine innings and the jersey won by Ila Borders when she became the first female to play in a minor-league game, in 1997. 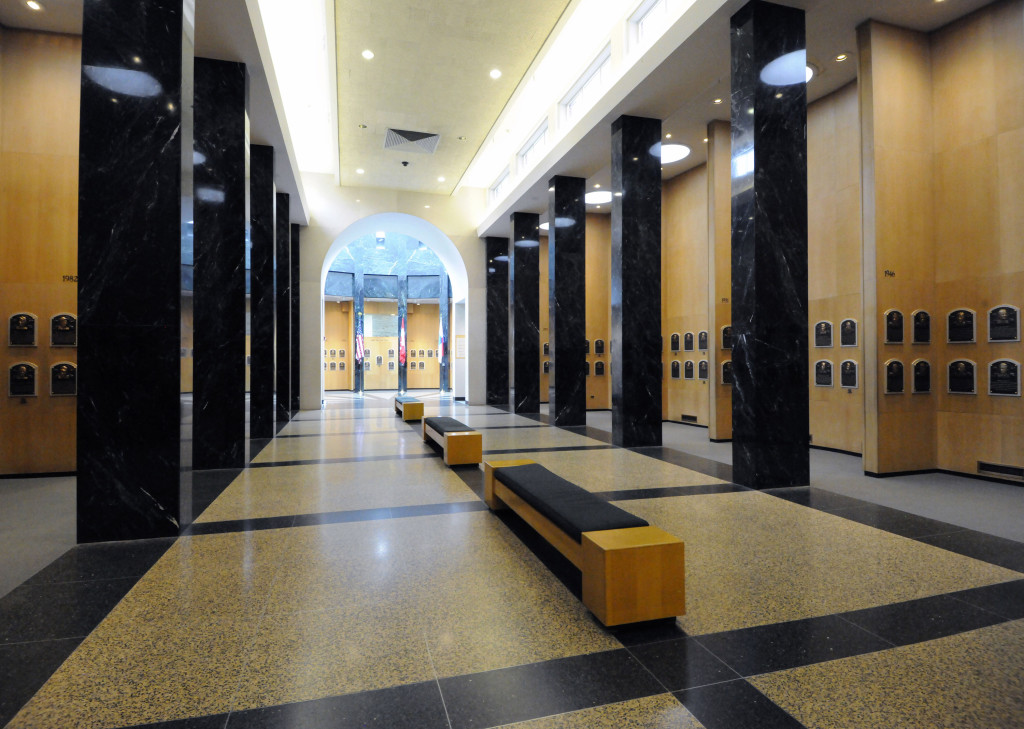 Plaque Gallery at the Baseball Hall of Fame.

There’s also a scorebook from the 33-inning game between Rochester and Pawtucket in 1981 – the longest game in professional baseball history. The losing pitcher in that game was Baldwinsville resident Steve Grilli, who started that season with the Chiefs, and his cap from that game has also been on display in the museum, although it’s currently not on exhibit.

Speaking of former Chiefs, former Syracuse player and manager Cox will be inducted into the Hall of Fame July 27 in Cooperstown along with Greg Maddux, Frank Thomas, Tom Glavine, Tony La Russa and Joe Torre. As the Chiefs’ skipper in 1976, Cox guided the Chiefs to their most recent International League Governors’ Cup championship.

Hall of Fame Induction Weekend, July 25-27, is the highlight of the Hall of Fame’s 75th anniversary celebration in 2014. Other major events include the Hall of Fame Classic on Saturday, when 30 former major-leaguers —  including Hall of Famers like Eddie Murray and Ozzie Smith — play a game at Cooperstown’s legendary Doubleday Field.

For information about Hall of Fame events this summer, visit www.baseballhall.org.

For information about the Chiefs and to purchase a ticket that will also get you into the Hall of Fame, visit www.syracusechiefs.com.