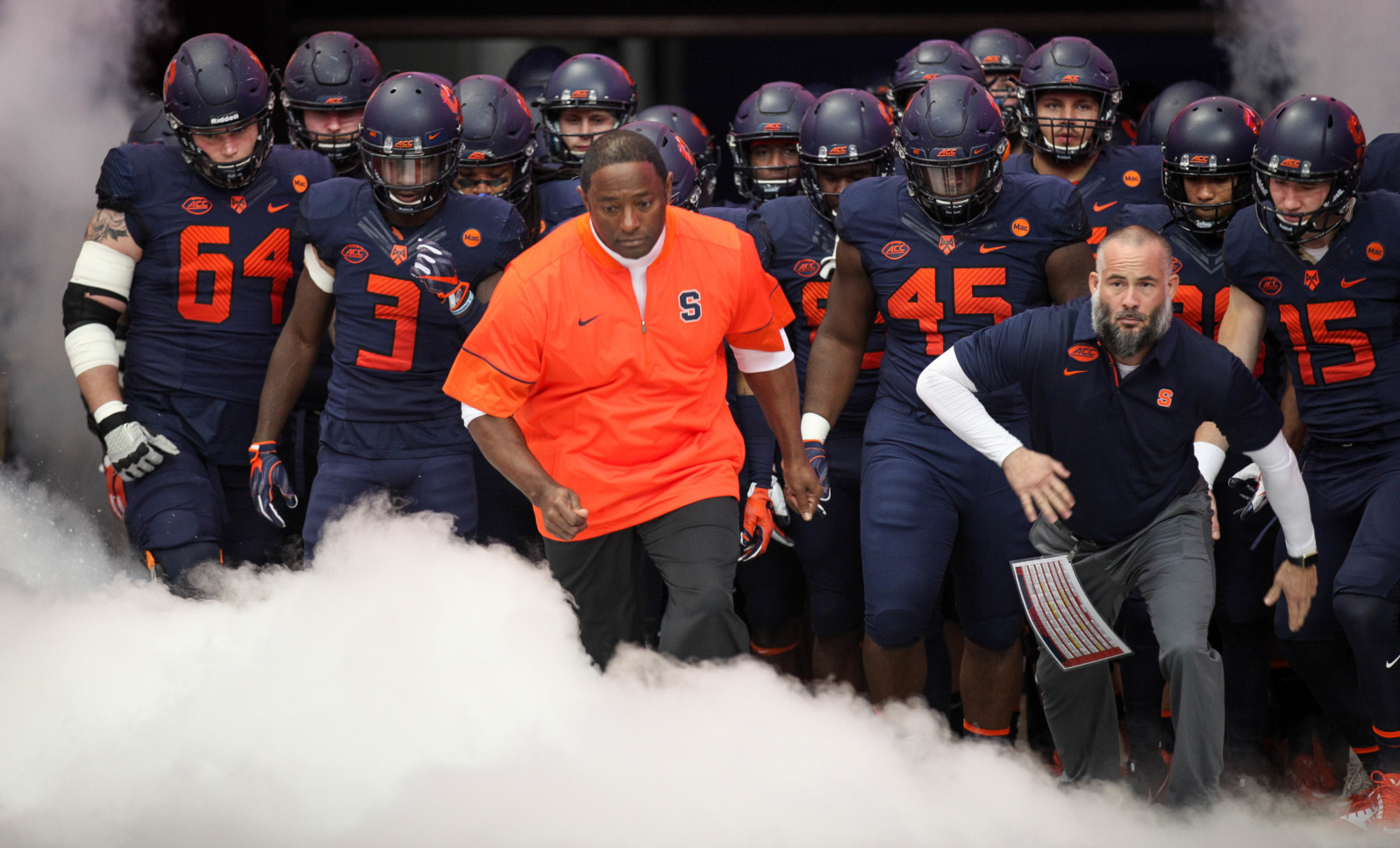 A so-so start despite three home games in September. A shocking win over a top-ranked team. An Eric Dungey injury and a brutal November. Final record: 4-8.

As Yogi Berra once said, it was déjà vu all over again for the Syracuse University football team.

On the surface, Dino Babers’ second year as Syracuse’s head coach looked just like his first. After a 2-3 start that included a 30-23 loss to Conference USA-member Middle Tennessee State at the Carrier Dome Sept. 9, the Orange outlasted Pittsburgh 27-24 Oct. 7 at home before stunning then-No. 2 Clemson 27-24 Oct. 13 at the Dome.

But the Orange will have to wait until September for its next win. After beating Clemson, Syracuse finished 0-5 as Dungey missed the last three games with a right foot injury.

In SU’s final game of the season Nov. 25, Boston College throttled the Orange 42-14 on Senior Day at the Dome as the Eagles’ backup quarterback, Darius Wade, enjoyed a career day and star freshman running back AJ Dillon sliced Syracuse’s defense for 193 yards and three touchdowns. With Dungey on the sidelines, the Orange was outscored 162-67 in losses to Wake Forest, Louisville and Boston College.

When Babers took over for Scott Shafer after the Orange finished — you guessed it — 4-8 in 2015, his main message to his players and the media was “belief without evidence.” In other words, everyone was going to have to believe that Babers’ famed hurry-up spread offense would lead to success, even if there wasn’t much evidence of that at the outset of Babers’ tenure.

Two years in, Babers is still asking for belief without evidence. The record may not show it, Babers said, but he’s convinced the Orange is on the cusp of greatness. 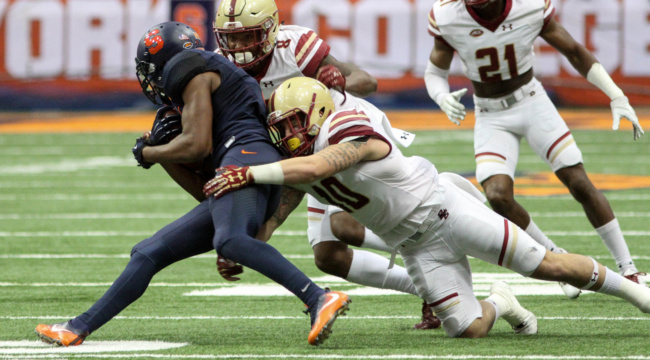 “I don’t feel like today is the end of what we’re going to do,” Babers said after the Boston College game. “This is the beginning. I really believe that the 2018 season is something that we’re going to talk about around here for a long, long time.”

Syracuse has not appeared in a bowl game since 2013, and generally a team needs to finish at least 6-6 to qualify for the postseason. When asked if he had a record or goal in mind that would make next year a success, Babers said, “I’m not going to do it that way, but I think if you look at what we’re doing and you look at what’s going to happen next year, I think you’re going to see drastic improvement.”

A closer look reveals that there was some improvement this season. Last year, the Orange was outscored by an average of 38.6-25.7. This season, it was 32.1-27.4. The Orange was competitive in difficult road environments against then-No. 25 LSU, future top-25 North Carolina State, then-No. 8 Miami, and pre-season No. 3 Florida State.

“The record may not seem like we got better, but honestly in the games it felt like we had a way better team than when I first got here,” said linebacker Parris Bennett, who along with fellow linebacker Zaire Franklin and wide receivers Steve Ishmail and Erv Phillips will be the most difficult seniors to replace.

Babers said the seniors on this year’s team — the players who had to endure the coaching change in the middle of their careers — helped build the foundation for the success that will come because they bought into Babers’ philosophy and helped create a culture that will endure for years.

“I just feel like we’ve come a long way just as a program and as a family,” Phillips said. “I think we did some great things this year and hopefully it carries on to next year and we’ll be able to finish some things.”

“Honestly, it means everything to us (to be called the foundation) because even though we didn’t make a bowl game, there are guys who are going to take it and do better than we did,” Bennett said.

The task is a daunting one, as the Orange plays in the Atlantic Coast Conference’s Coastal Division, perhaps the most difficult division among the Power 5 conferences. SU finished 2-6 in the ACC and last in the division this year behind Clemson, Louisville, Florida State, Wake Forest, NC State and Boston College.

“That’s where we want to be,” Babers said. “We want to be in the toughest conference so that when we are successful, no one can take it away from us.”

The key, as always, is recruiting better players and Babers said that’s where the Orange has made the biggest strides in the last two years. As Babers said when talking about the likes of Louisville’s Lamar Jackson and BC’s Dillon, “We need some bigger cats to bring those guys down.”

Babers created a bit of a firestorm last week when he said the community needed to be more mature about handling the success of the program, specifically the win over Clemson. Babers later apologized, saying that he meant the SU “football family,” not the fans or media.

But in the end, Babers’ point was the same: The Orange program still has a long way to go to be a consistent bowl team and ACC title contender.

“Just continue believing,” said Ishmael, who set school records for receptions in a season (105) and career receiving yards (2,891). “We showed so many glimpses of the greatness that we have in this team and the coaching staff. As long as we get everything together, this is going to look crazy and we’re definitely going to be an ACC-championship caliber team in a few years. I just tell SU fans to keep believing and have faith.”

Belief without evidence — and a little more patience.