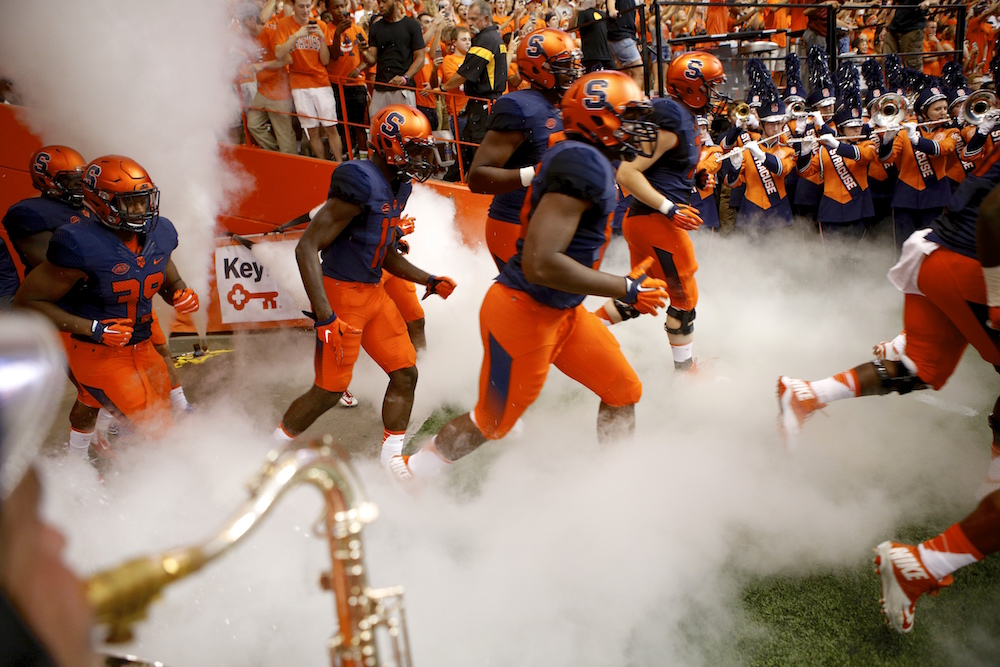 Dino Babers is setting himself up for either tremendous success or massive failure.

In the past 12 years, the Syracuse University football team has had four head coaches and no happy endings — unless you count Doug Marrone leaving his self-proclaimed “dream job” at SU for the NFL’s Buffalo Bills.

So what makes coach No. 5, Dino Babers, think it’s going to end any differently? Well, for starters, Babers has a clear vision, and it doesn’t end with him getting fired after yet another 3-9 or 4-8 season.

“Close your eyes and visualize this,” Babers said at his introductory news conference on Monday, Dec. 7. “You’re in the Carrier Dome. The house is filled. The feeling is electric. The noise is deafening. You have a defense that is relentless. You have a special teams that has been well-coached. You have an offense that will not huddle and you have a game that is faster than you’ve ever seen on turf. Open your eyes … that is going to be a reality. That is going to be Syracuse football.”

And with that, Babers set a bar that hasn’t been reached consistently at SU since the mid- to late 1990s. The 54-year-old Babers, who called this position his “destination job,” said he believes the Orange under his watch will compete for the Atlantic Coast Conference championship, rejuvenate the fan base and fill the Carrier Dome again on Saturday afternoons that don’t involve the Duke or North Carolina basketball teams.

“This is a move of faith; belief without evidence,” he said. “I really believe that we are going to start something that people are going to be talking about for a long, long time.”

Babers is new athletic director Mark Coyle’s first hire, and he fills Coyle’s requirement that Scott Shafer’s replacement has “a proven track record.” In four years as a head coach, Babers is 37-16: 19-7 with two Ohio Valley Conference Coach of the Year awards at Eastern Illinois in 2012-2013, and 18-9 with a bowl win and Mid-American Conference title at Bowling Green in 2014-2015.

But Babers’ most notable coaching experience may be as an assistant coach at Baylor University, where he helped head coach Art Briles revitalize the program and turn it into a national title contender with a fast-paced, up-tempo offense that Babers plans to use at SU.

So while Orange fans have been conditioned over the years to ask why, Babers is here to say, “Why not?”