He read an advertisement on Craigslist for a live/work space near Armory Square, in the former Lincoln Supply warehouse, 109 Otisco St.

“This is the exact apartment we wanted in New York City and couldn’t afford,” Catherine Wolfe said.

The fourth-floor end unit has three walls of windows with views of distant hills, Armory Square, the Carrier Dome and both sunrises and sunsets. 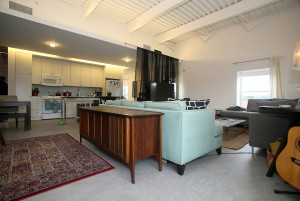 Stephen Wolfe’s recent purchase of a stereo console backs up to the sofa in the former Lincoln Supply building on the city’s near west side.
Photo by Gloria Wright | Syracuse New Times

The 1,275-square-foot apartment is one of 10 in the 100-year-old, four-story former warehouse transformed by the Near Westside Initiative, a non-profit whose mission is revitalizing the Near West Side.

The building uses green technologies, including geothermal heating and cooling and storm water retention to eliminate all site water from entering the city and county sewer systems. The first and second floors contain office space and are home to the La Casita Cultural Center and Say Yes to Education.

One apartment in the building became available Sept. 1, said Maarten Jacobs, director of the NearWestside Initiative.

The 10 apartments range from 1,121 to 1,275 square feet, with rents ranging from $1,050 to $1,250 a month, including utilities. Each apartment is a wide-open space, with a sort-of cube containing the kitchen, laundry and bathroom placed in differing configurations. 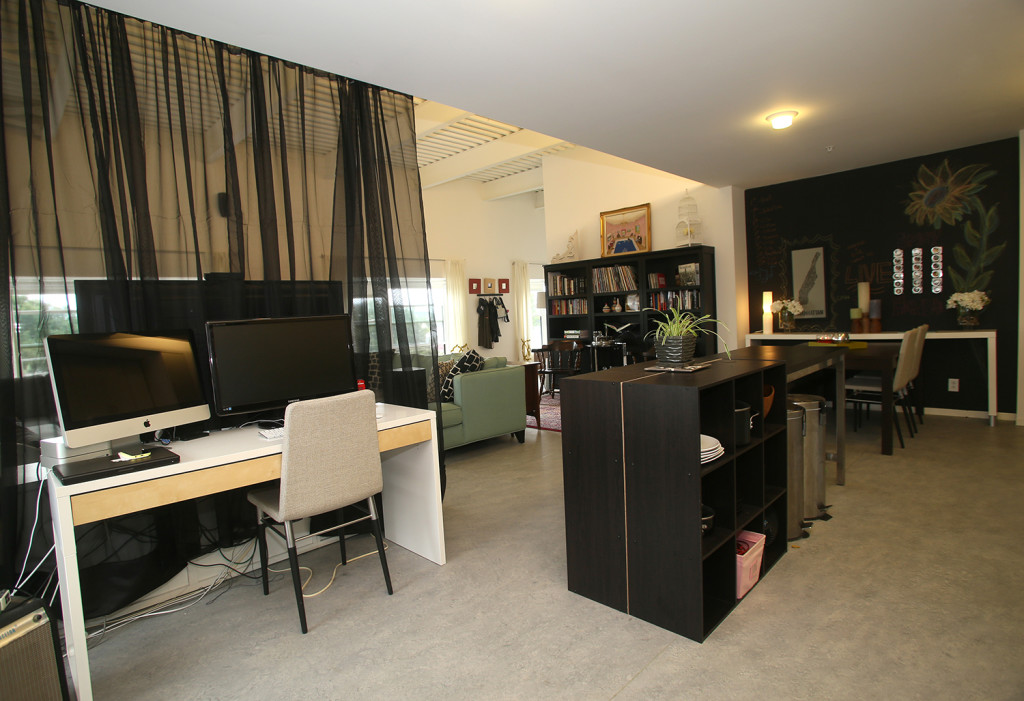 A sheer curtain creates a computer work station separate from the living area at the former Lincold Supply building on the city’s near west side.
Photo by Gloria Wright | Syracuse New Times

The couple met when they were both living in New York City, and Stephen agreed to move back to Catherine’s native Central New York as long as they found a place to live in a city environment. Catherine is an interior designer with Ramsgard Architectural Design, in Skaneateles; Stephen is design center manager at Ethan Allen, in DeWitt.

They love spending a rare day off together rearranging the apartment.

“We have so much fun,” Catherine said.

The apartments have some storage space in the cube’s utility closet, but no closets.
The Wolfe said bookshelves, two large Ikea wardrobes and dressers provide storage space, but they also turned about one-third of the bedroom into a walk-in closet. 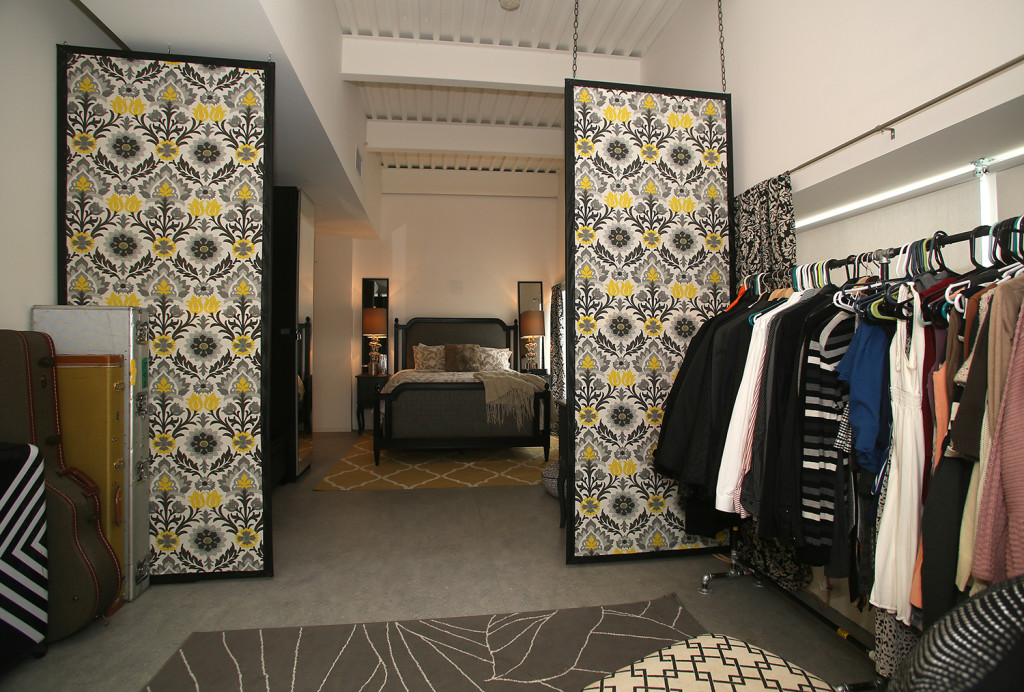 Catherine and Stephen Wolfe used fabric screens to create a walk-in closet in their fourth-floor apartment in the former Lincoln Supply warehouse on the near west side.
Photo by Gloria Wright | Syracuse New Times

Flexibility “is what’s great about this place,” Catherine said.

While the couple can see Armory Square from their windows, reaching it isn’t convenient. The West Street arterial divides the Near West Side from downtown, and walking to Armory Square means walking under the railroad bridge on West Fayette Street, “which feels a little dicey,” Stephen said.

“More than once, we’ve driven to Armory Square,” he said a little sheepishly.

They said they are looking forward to next summer, when the city plans to build a cross-walk across the arterial, giving them a straighter walk into downtown.

When they started looking for apartments, they were hoping to find one with a roof-top outdoor space. The Lincoln Building’s roof-top holds solar panels.

“We’re down with that,” Stephen said.

And they also like paying rent to a non-profit organization, Catherine said.

On rainy days, water hitting the solar panels sounds like rain on a tin metal roof.

“Out of all the great things about this apartment, that’s one of the top three,” Stephen said.

Free Will Astrology
Fashion Week Hits the Pavement
To Top