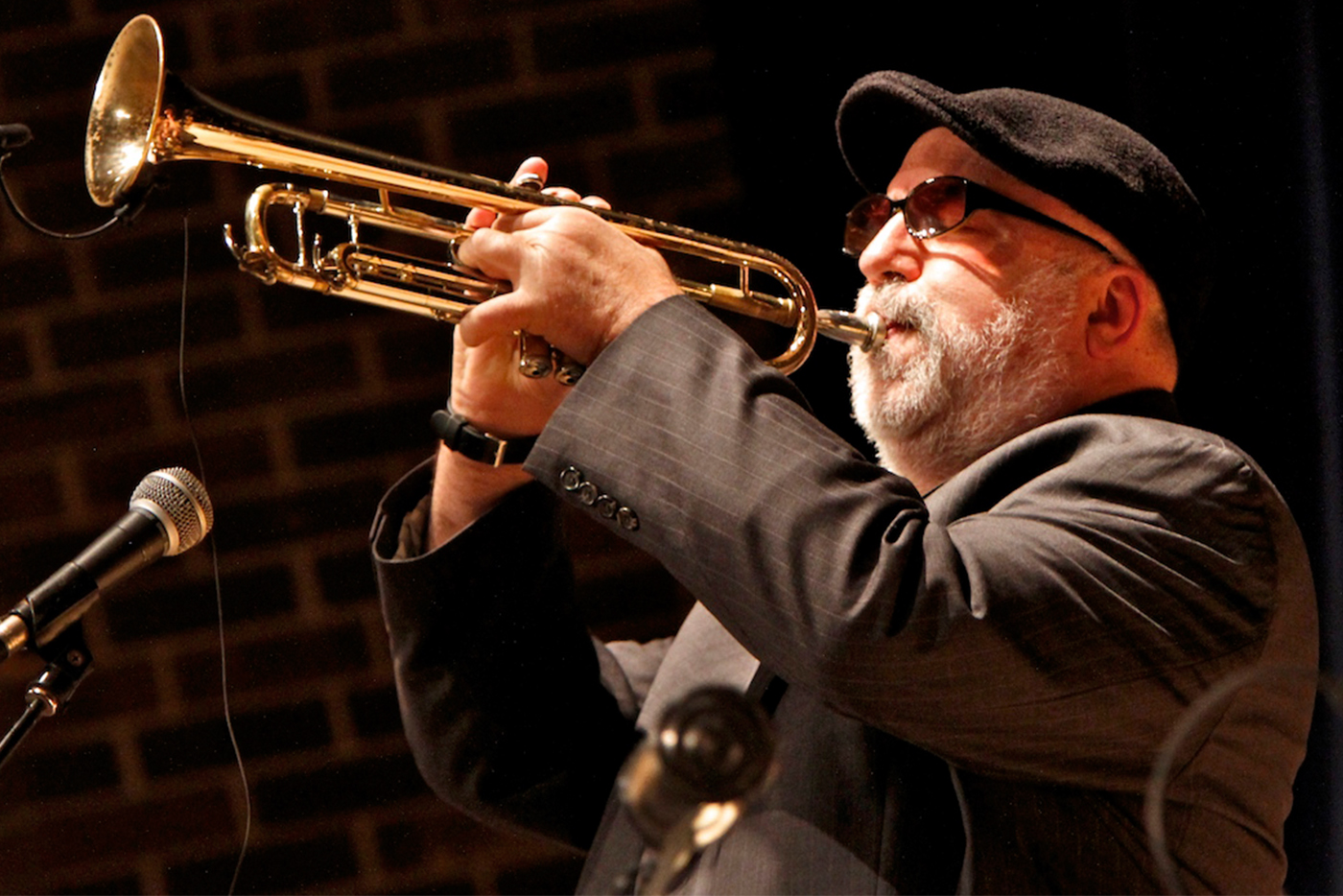 All That Jazz Fest

This weekend’s Syracuse M&T Jazz Fest will celebrate 34 years of the free event with national headliners including pop-soul favorite Michael McDonald, Trombone Shorty and Orleans Avenue, Larry Coryell and the Eleventh House and The Mavericks. Those musicians will top a two-day bill studded with talent tied to Central New York.

Salt City native Paulie Cerra will travel eastbound with his Los Angeles-based group Groove Legacy, while the Second Line Syracuse brass band will bring the beat. Noteified and Julia Goodwin, two attractions who are part of WSYR-Channel 9 news anchor Carrie Lazarus’ “Extraordinary” initiative, will also perform along with the Syracuse Parks and Recreation Stan Colella All Star Band. And a tribute to the late jazz legend Mark Murphy, who was born in Syracuse and raised in Fulton, will feature trumpeter and flugelhornist Randy Brecker, New York Voices, Joe Carello, Ronnie Leigh and more.

The festival returns to the scenic campus grounds of Onondaga Community College, 4585 W. Seneca Turnpike, on Saturday, July 2, and Sunday, July 3. Not one to mince words, Jazz Fest founder and executive producer Frank Malfitano declared, “All I can say is fasten your seat belts and get ready for an experience you’re going to remember the rest of your life.” 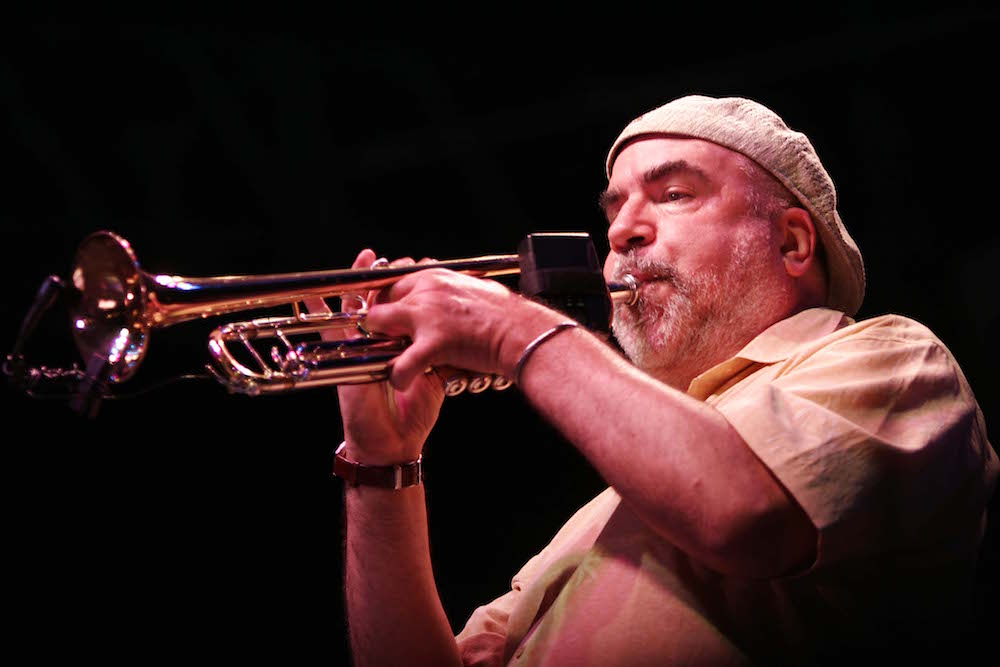 Jazz Fest 34 will recognize Brecker as this year’s artist-in-residence. The award-winning jazz trumpeter and composer has appeared at the Jazz Fest more than any other artist, and has performed at the festival alongside the Brecker Brothers Band, Chuck Loeb, Mike Stern and during a tribute to the late guitarist Hiram Bullock, among others.

“Rappin’ Randroid and I have a connection that dates back 44 years to his early days with Larry Coryell’s original Eleventh House band, when I met them at Syracuse University’s Crouse Auditorium in 1972,” Malfitano recalled. “As an artist, his resume is illustrious and his musical range is amazing. Honoring him as this year’s Jazz Fest dedicatee and artist-in-residence is long overdue, but I have a sneaking suspicion he’ll forgive me.”

Brecker will perform with Coryell and the Eleventh House on Sunday at 8 p.m. The group had talked about reuniting for years, but didn’t until Coryell’s 70th birthday three years ago. Once everyone had gathered, it was only natural to play together.

“It was a heartfelt and emotional concert,” Brecker recalled. “It was great to see everybody and we decided to do some other gigs. After all these years, everyone’s playing is still great.”

Brecker will also take part in the Mark Murphy tribute, slated for Saturday at 6 p.m. Murphy, known for his scat singing and be-bop vocalese, was discovered by Sammy Davis Jr. when Murphy was performing at a jam session at Syracuse’s Ebony Club in 1953. He scored a 1959 hit with the Steve Allen composition “This Could Be the Start of Something Big,” went on to release more than 40 albums over his six-decade Grammy-nominated career, and made occasional visits to Central New York, including a celebrated performance at the 1998 Jazz Fest.

Brecker’s personal history with Murphy, who passed away in October at age 83, will surely make for a poignant set. “I was familiar with him ever since I was a kid,” Brecker recalled. “My dad was a jazz man. My very first Mark Murphy record was when I was in high school and I followed him through the whole gamut of his career. It was a big thrill going from being a fan to playing with him.”

Brecker played several tours with Murphy and is also on several of his records. He saw firsthand what he contributed to jazz.

“It’s hard to put it into words,” Brecker says. “He changed everything. His phrasing, the sound of his voice, he was wonderful at scatting. He had a full-bodied sound and he knew exactly what he wanted to do. He stuck to his guns through his whole career. If you talk to younger, popular singers these days, they’ll mention Mark Murphy. He was really an instrumentalist singer with his musicianship and he was just a wonderful, sweet man. He loved singing and he loved life.

“When you hear somebody when you’re young, they seem larger than life,” Brecker noted. “He always had that vibe about him to me.”

The Mark Murphy salute will mix Brecker with some talent he has shared stages with in the past, along with some newbies, making for a potentially unpredictable set. “This is typical of Frank (Malfitano)’s creativity,” Brecker says. “He’s also a fan. It’s no easy feat to research everyone and put them together. He’s been so instrumental in planning it, but there will be some spontaneity, too.” 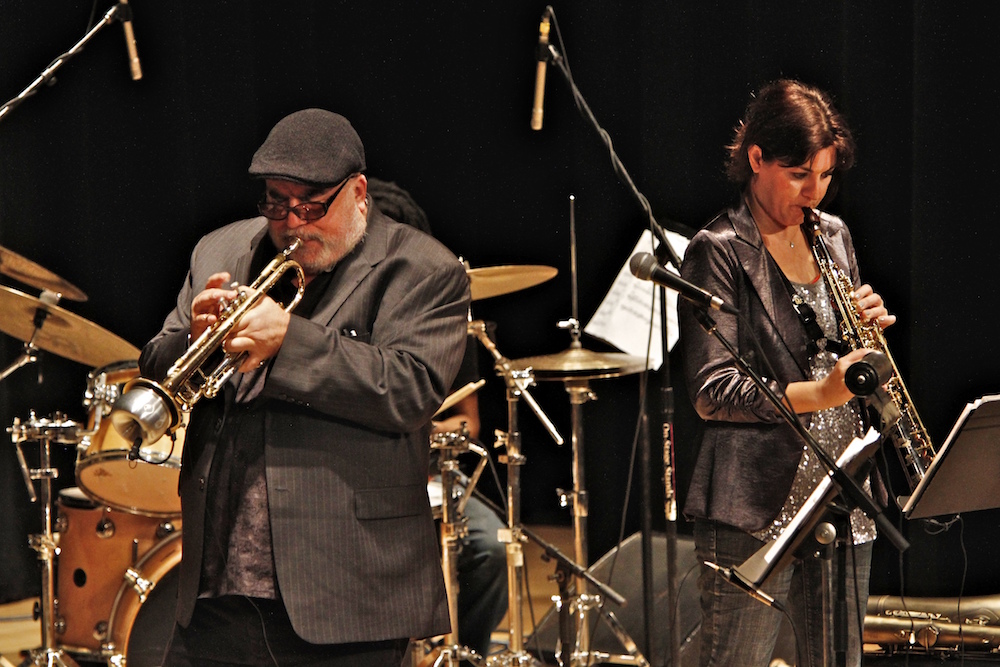 The Mavericks, who perform on Saturday at 7:45 p.m., are also celebrating a reunion of sorts. The band that mixes neotraditional country music with Latin and rockabilly flavors played from 1989 to 2004, then stopped until 2012.

“Everyone was doing different things,” guitarist Eddie Perez said about the band’s breakup period. “I was touring with Dwight Yoakam, vocalist Raul Malo did several solo records, everyone tried different things. But we started feeling like we were missing the brotherhood and camaraderie of this. It’s not just music and business. When you’re in a band, the best situation is when everyone loves hanging out: laughing and enjoying the journey you’re having together. We were all missing that.”

Once the group reunited, they hit the road hard. For the past four years they’ve been playing more than 120 shows annually and have hit venues in Australia, Canada, Europe and across the United States. And Perez doesn’t see the excitement waning any time soon.

“We’re not slowing down,” he declared. “We’re taking time to harness this creative energy we’re having right now. All the bandmates are at the top of their games and we’re really gelling as a unit. It’s a special thing and it doesn’t happen very often.”

Jazz Fest impresario Malfitano concurred with Perez’s assessment: “The Mavericks are literally at Rolling Stones-level when it comes to being one of the greatest live bands on the planet. Raul Malo is one of the greatest vocalists I’ve ever heard, and the band’s core group of Eddie Perez, drummer Paul Deakin and pianist Jerry Dale McFadden are completely off the charts. Their genre-bending style and sound is as eclectic as it gets, which explains why they’ve won awards in so many different musical categories. These guys can do anything, and do it better than anyone. The Mavericks will be for this year’s Jazz Fest what Lake Street Dive was last year, and will do exactly what Trombone Shorty did two years ago when he caught the audience completely by surprise and stole the show.”

The Mavericks are getting back into the studio with plans to release a double live vinyl record in the fall. They’ve also been consistently working on new material and Christmas music for the upcoming season.

“I’m so fortunate to be in this band of musicians,” Perez said. “Some of the best musicians in the world are in this band. What we do is a specific thing. It’s old school. Our essence and energy still comes from being a garage band, teenagers with dreams in their eyes. That’s what we try to convey. That’s our magic, 25 years strong into it.”

The group will perform songs from their discography, including their 2015 release Mono, which features Perez’s son, Jett, on the cover. Although their music is a blend of influences, Perez noted the soul of their sound as the most important element.

“We always think: Does it strike a chord in us? Does it make us move? Does it make us feel,” he said. “If you’re playing 120 shows a year, first and foremost, you have to love what you’re putting forth. My sole purpose is to stay creative in the midst of all the negativity in the world. It’s essential to surround yourself with like-minded people. That’s how you stay fresh and stay moving.

“I hope our music brings as much joy to people out there as we enjoy it. It’s a non-stop joy fest and a very high-energy show. We are so grateful. Fans give us the opportunity when they come see us. I hope they have some fun with us.”

“It’s tough out there. You have to be very well-rounded. Be proficient in a lot of styles. Enjoy a lot of music. I like them all. I like to write my own music and do clinics and workshops and I would recommend that path, but you have to practice every day and really want to do it. It’s really competitive and in the digital world, things get stolen. You have to work very hard to make ends meet. But it’s great to be a musician doing what you love.”

“Search your heart. Really figure out what your musical journey is going to be and what you want it to be. What do you want to say to the world? That’s what will put you on the right path to doing so. I believe the world always needs artists, poets and communicators, especially if the message is love. We need more of that. And most of all, be honest and be real about who you are in the midst of it all. Listen to your gut instinct. Lots of people will tell you who they think you should be. Search yourself first so you can have a focus. You can dictate your own experience.” 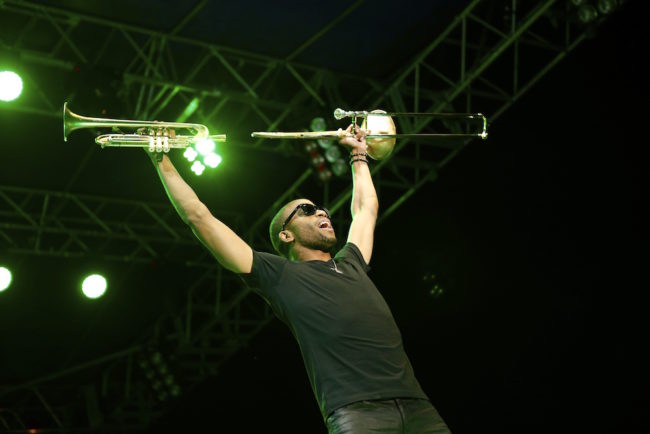 Overflow Parking: When on-campus lots are full, off-campus parking will be $5 at two college lots located on Route 173. In the event these lots are utilized, large white OCC campus shuttle buses will be transporting people to and from campus.

What You Can’t Bring In: Coolers, backpacks, alcoholic beverages, glass containers or bottles, grills, overnight camping, weapons of any kind, pets, fireworks, drones and selfie sticks are all taboo. Plus, no unattended children, no unauthorized videotaping or audio recording, and turn off cellphone ringers during performances.

What You Can Bring In: Lawn chairs, blankets, sunglasses, sunscreen, umbrellas, bug repellent, ID tags for small children, identifying balloons or pennants for car antennae, and consideration and respect for the artists and fellow festival-goers.

The official Syracuse M&T Jazz Fest program is inserted into all issues of this week’s Syracuse New Times.