During Kitchen Theatre Company’s production of Thin Walls, one tenant describes the play’s location as “the only place in the world where everybody can fit in.”

The place is an unnamed, century-old apartment house on an unspecified street somewhere in Manhattan, which sounds like Chelsea. The “everybody” includes manicurists, cellists and murderers, providing enough ethnic diversity to give Ann Coulter the vapors.

Playwright-performer Alice Eve Cohen lived in Room 303 in the building and relates events there over the decade, 1985 to 1995, in the voices of 12 tenants but not her own. In telling the story she is an invisible narrator, and as an actress she plays all the people– male and female, young and old, black, yellow and white– who speak to her. Cohen is a bravura performer who has been doing Thin Walls for more than 10 years at venues like the Edinburgh Festival. 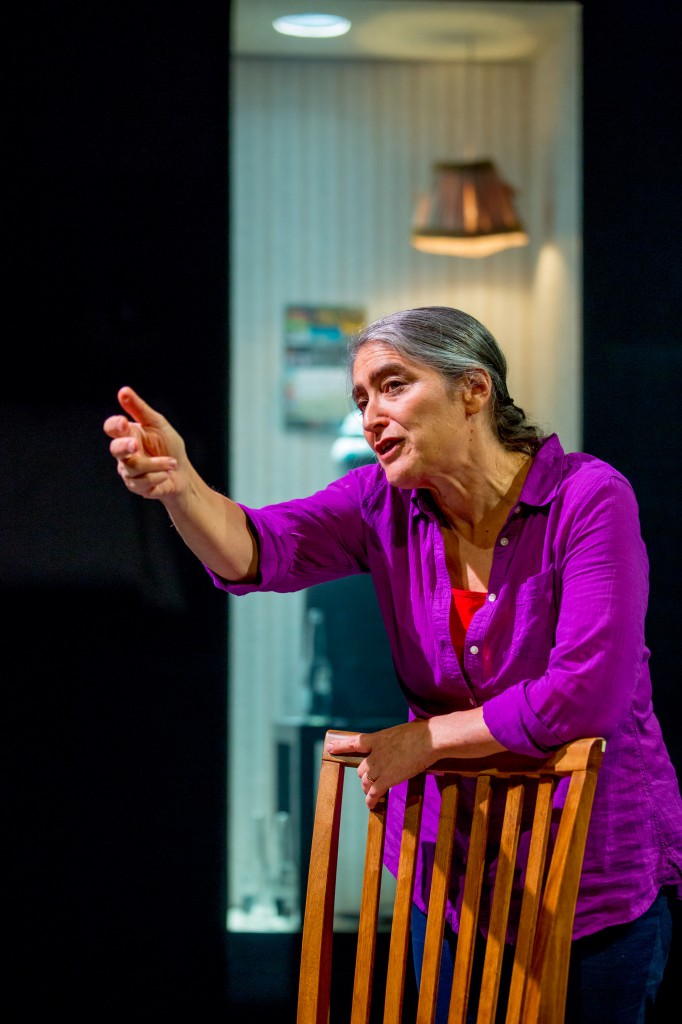 Although there is no narrative frame, Cohen gives us some glimpses in other characters’ dialogue about what her life was like then. Because her husband is a symphony player seen leaving the building wearing a tuxedo on the weekends, he is nicknamed “Maestro.” She, an aspiring playwright, is called “Mrs. Maestro.”

We learn that the building was once a landmark of middle American culture. Between the world wars, bandleader Rudy Vallee used to broadcast from rooftop gardens. “Go there today,” one voice growls, “and you’ll find nothing but used needles and syringes.”

A decades-long social slide envelops the building. The larger apartments once lodged middle-class residents, but those rooms were subdivided sometime in the 1950s and 1960s so that the place could be described as “low-cost housing.” The thinness of the new walls is what prompts Cohen’s title, and the closer interaction of residents is what has given her raw material for the play. Some remaining tenants have good-paying jobs, but they threaten to flee as the residence increasingly serves as a shelter for the homeless.

Early encounters with residents are unsettling. The unsmiling superintendent Joe likes to work with his shirt off and dubs the playwright and her husband “Mr. & Ms. Maestro,” an assertion of his dominance. The mentally unstable amazon Marie, initially begs for singing lessons when she hears a recording of The Barber of Seville. Unable to carry a tune, she is rebuffed, which leads to trouble.

Playwright Cohen allows that the 38 scene titles of Thin Walls be printed in the program, but she never offers a roster of the 12 residents, nor are most of them introduced in their own name. Instead, their speeches run together, often with no blackout, and we are invited to compare and contrast them.

We are grateful for people with distinct accents and characters, like Hava, the Israeli cellist, or Chloe, a calypso-voiced manicurist from Trinidad. Cohen seems fondest of the WASPish former flower children, he now a banker, and she the head of a fan club for the David Janssen TV series The Fugitive.

Other characters, including a victim of domestic violence and a murderer, are harder to keep straight, however. Director Rachel Lampert tries to help us along with seven illuminated panels behind a translucent façade, visual links to characters whose names we do not know.

The building has had only one celebrity tenant: Maxim Gorky, the famed Russian novelist of the early 20th century, who lived in one of the fancier three-bedroom apartments. Gorky’s best-known stage work, The Lower Depths (1902), is about the motley, mad and poetic denizens of a cheap hotel. It seems likely that the playwright would prefer us to see Thin Walls as a kind of postmodern Lower Depths.