Many drivers along Interstate 690 are familiar with the window boxes of pink and purple petunias on the roof-top garden on Franklin Square’s Mission Landing condominiums.

“I get a lot of comments on the wave petunias,’’ Karen Goodman said. “People say, ‘I’ve seen this from the highway.’ That’s always fun to hear.” 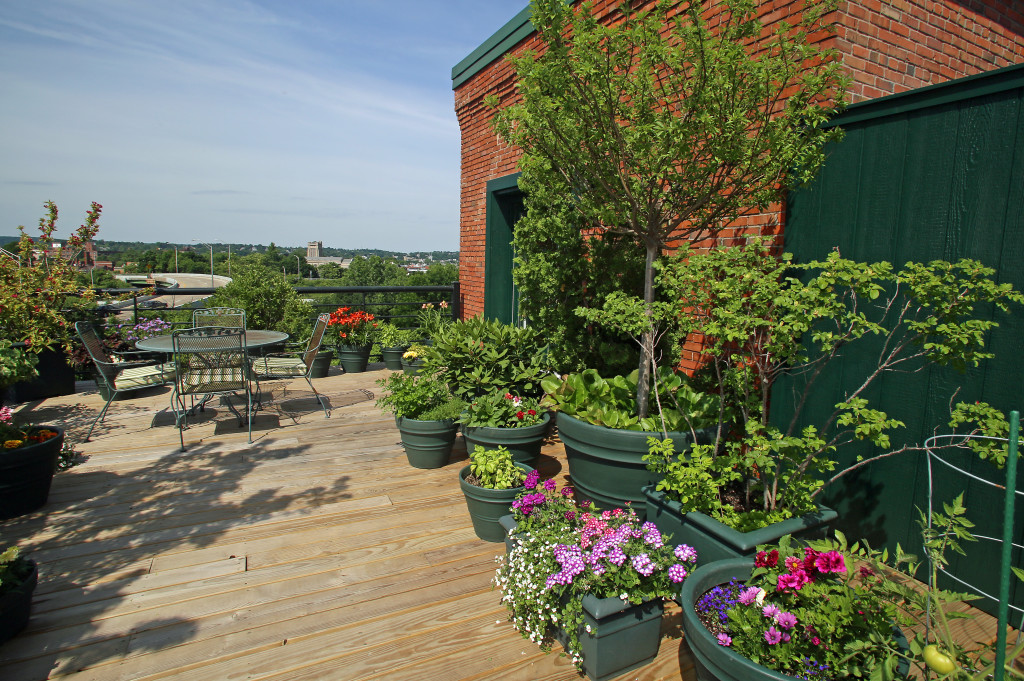 Goodman and her husband, Charles, have lived in a 3,000-square-foot condominium on the top floor of  Mission Landing for nearly 20 years.
The roof-top deck faces south, giving the Goodmans views of both the sunrise and sunset. 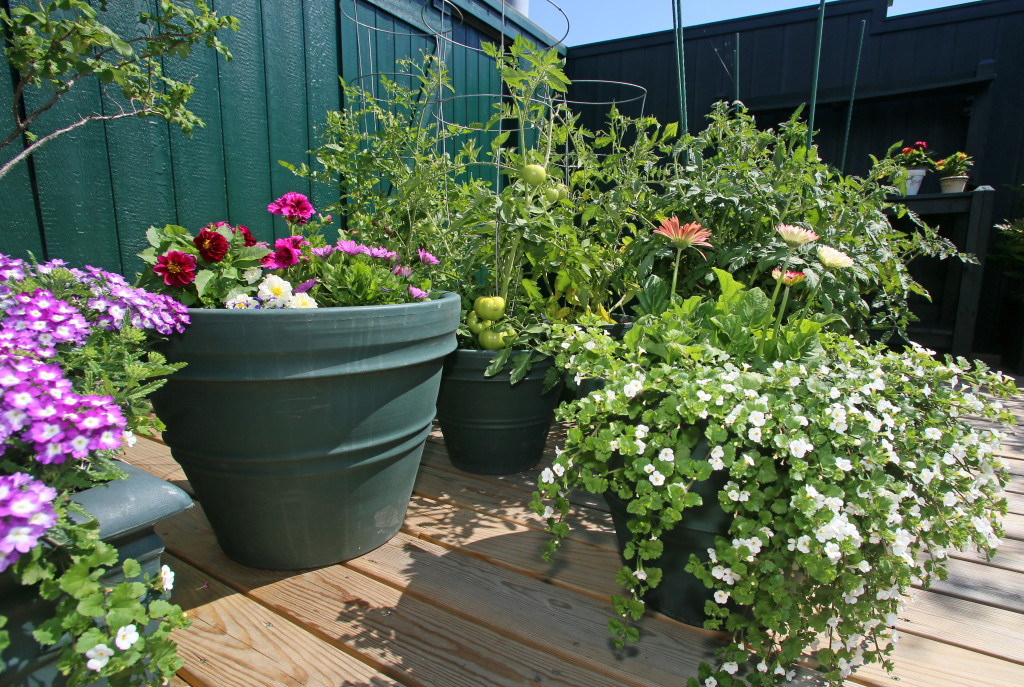 Karen Goodman, who loves to cook, also grows herbs and tomatoes. And she fills in with annuals, including the petunias. She varies the annuals, this year planting verbena.

She has gotten advice from a good friend who is a landscape designer but does all her own weeding and planting, she said. 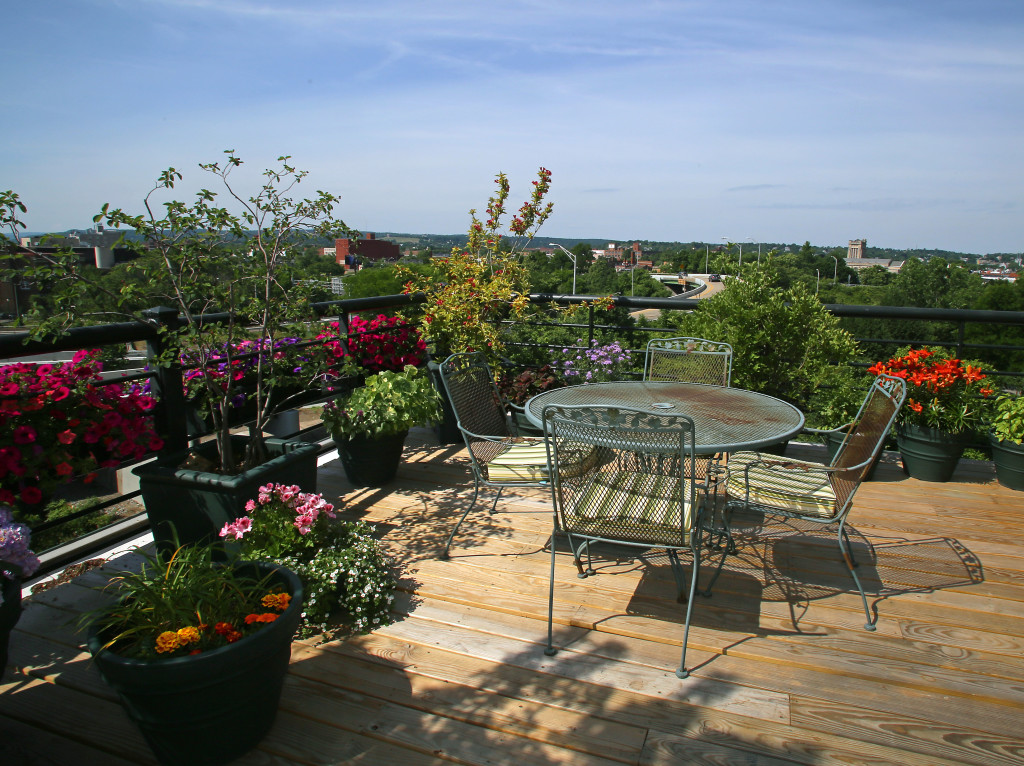 She tried growing peonies, her favorite flower, but the plants didn’t survive the winter cold and wind.

“The winds up here are very strong,” she said, so powerful at times that the trees are anchored into the apartment’s outside walls.

The Goodmans lived in Manlius for 11 years before moving into an apartment above Pastabilities, in Armory Square, when the area was first beginning to develop.

“It was the early days. You did kind of bond with all the people who owned businesses there,” she said. 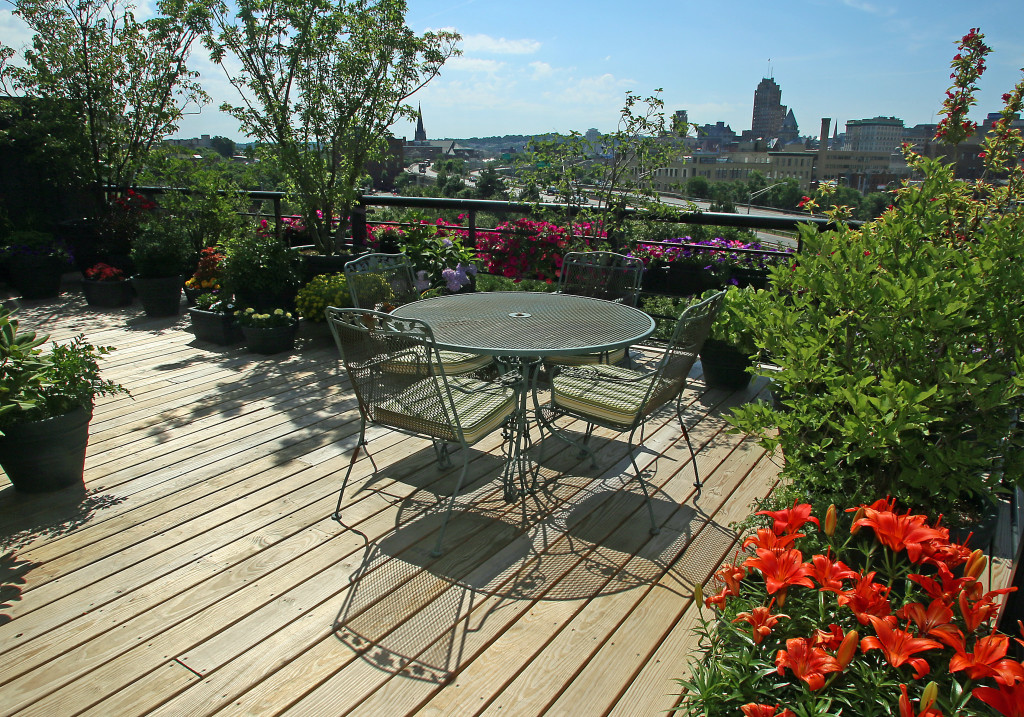 The roof-top garden at Mission Landing in Franklin Square has views of downtown.
Photo by Gloria Wright | Syracuse New Times

When Pastabilities placed tables outdoors, the Goodmans would come down for an after-dinner drink and “people watch, which was great fun,” she said.

After three years, when their sixth child graduated college, Charles Goodman decided to leave his job as president of Syracuse China, and the couple moved to New York City. When Syracuse China asked him to return to Syracuse nearly 20 years ago, Karen agreed to move back — with conditions.

“I said I’ll go, but no station wagon, no dog and I want to live in the city.”