With two months to go until Election Day 2015, one race at the top of the ticket seems all but inevitable.

Although Democrats have turned the corner in the numbers race, their Onondaga County executive candidate, Toby Shelley, lacks the organization and the cash to even dream of unseating incumbent Republican Joanie Mahoney. The primary on Thursday, Sept. 10, however, provides a sideshow worthy of Peter Sellers running against himself.

It started with Mahoney stating publicly that she would not accept the Conservative Party nomination for the November ballot (usually an automatic alliance in state and local elections) and Shelley announcing his intention to take it.

Then there were comments attributed to Shelley in the Syracuse New Times (see Ed Griffin-Nolan’s June 10 article, “Toby Shelley’s Conservative Context”), characterized as racial profiling, which reportedly angered Mahoney and motivated her to encourage Syracuse M&T Jazz Fest board chair Oscar Peterson to challenge Shelley for the Conservative nod.

Peterson denies Mahoney had any role in launching his electoral effort, although maintaining that her Commissioner of Purchase Sean Carroll is his campaign manager. “He’s helping me out, anyway,” Peterson says. Carroll insists he is serving as legs for Peterson, who recently underwent a second leg amputation, helping him out while professing total support for Mahoney’s bid for re-election.

“She’s not a Conservative,” Peterson observes of Mahoney’s tenure in office, of which many local political cognoscenti reflect “she might as well be a Democrat.” Mahoney has, however, cut it down the middle, shining as the Republican on the hill reducing the size of county government. 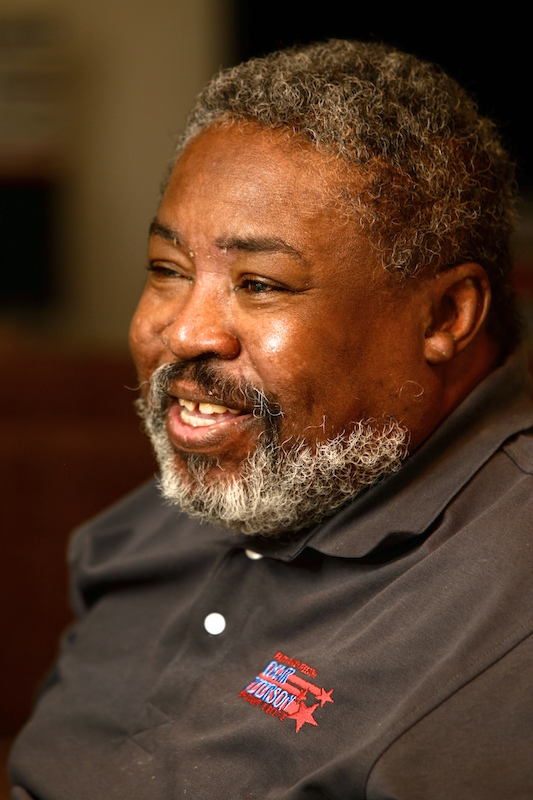 “Technically, I’m the only (registered) Conservative running,” Peterson notes. “When I found out Toby Shelley was trying to get on the Conservative Party line as well as the Democrat and Working Families lines, I said to myself, ‘That’s just spreading yourself too thin. How can you be agreeing with all those at the same time?’ And he’s going to have to answer to Conservatives.”

A dozen years ago Peterson came to town from Atlanta, where he didn’t have to register in a party to be politically active. “I picked up a copy of the Syracuse New Times,” he recalls, “and saw Stanley Dean, a person of color, was chair of the Republican City Committee. I had been a Republican for a while, mentally, and when I met him he encouraged me to get involved.”

Peterson rose to a position of leadership on the city committee, constantly pushing to expand the party’s base among people of color, until he moved to a facility in Baldwinsville oriented to his health issues and challenges to his mobility. “They presumed that I could not represent the city properly,” he mused.

Peterson says he felt pressure from Republicans when he tried to move from the party’s city to its state committee. “Conservatives have always been closer to my personal beliefs and values,” he says, “and when I went to my last (annual party fundraiser) clambake, I knew I just wasn’t going to be a Republican any more. I filled out a voter registration form and checked Conservative.”

He says he will counter his limited mobility with social media. “And mailings to registered Conservatives explaining my not being able to get around to meet them, but how on my Facebook page I’m calling for the repeal of the Safe Act and the state court ruling on gay marriage.”

Apoplectic About Apostrophes
News and Blues
To Top