Clybourne Park is a coup for Central New York Playhouse

Bruce Norris’ Clybourne Park, a dark comedy-drama about history, race and real estate, is a triple-hitter, having copped both a Tony Award for Best Play and a Pulitzer Prize, and then an Olivier for the London production.

Top regional companies have scrambled to get it, with Ithaca’s Hangar Theatre hosting the upstate premiere in summer 2013. So just booking Clybourne Park is a coup for Central New York Playhouse, the bustling little company in the drooping Shoppingtown mall.

Barely visible program notes explain that the first act takes place in September 1959, and that the second is 55 years later, September 2014. Unmentioned is that Norris’ drama interacts with one of the best-known American stage works, Lorraine Hansberry’s A Raisin in the Sun. She fictionalized the name “Clybourne Park” to represent Chicago’s Washington Park, a neighborhood of comfortable homes whose racial integration was a flashpoint in the late 1950s. The first act speculates on what a white family might have felt selling in 1959.

The second act takes place on the same set, showing a bit of wear. The house, however, has increased in value. Karel Blakeley’s set, bereft of furniture, implies that it’s the kind of Tudor we might find off James Street. Clybourne Park might have become all black, but the quality of the housing plus its convenience to the commercial city center make it ripe for gentrification. The current black owners, related to the 1959 buyers, suffer considerable anxiety turning the place over to two striving yuppies. 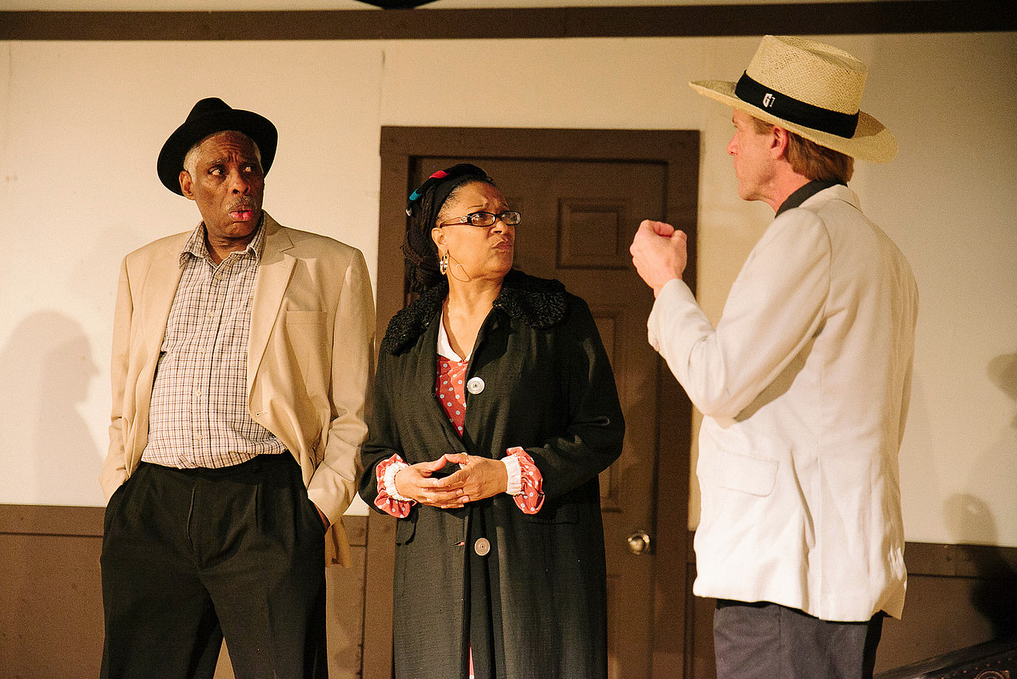 Despite the deeply profound things Clybourne Park has to say about race, a good part of the work’s appeal is its theatricality. Norris has written two plays and has the same actors play contrasting roles in both. For example, lovely Lauren Puente is a deaf pregnant woman, Betsy, in 1959 but a can’t-shut-her-up chatterbox pregnant woman, Lindsey, in 2014.

More importantly, language in the first act is smarmy and evasive. Characters, black and white, avoid saying what they really feel, and we perceive meaning through body set and context. The couple who own the house in 1959, lumbering Russ (John Brackett) and flighty Bev (Aileen Kenneson), want to sell because of a Big Secret they do not wish to discuss. It’s a busybody from the local Improvement Association, Karl (Austin Arlington), who warns that buyers who want to upset the neighborhood want to move in.

By 2014 blacks and whites, all members of the professional class, know many people in common. They all use smartphones, and they have all been to Prague. The wife of the couple selling, Lena (Annette Adams-Brown), can afford to be completely candid that she does not want to cut herself off from a property where her family had to suffer such abuse to establish themselves. Even through the scene is nominally about going over the obscure language on contracts, a thunderous candor overtakes each character. When resentment, fear, anger and aggression at last break through to the surface, the language is enough to make David Mamet blush.

Director Dan Stevens makes perfect choices in casting, mixing veterans and new faces. The production would have been impossible without two of the best mature performers we have. As Francine the “colored” maid of 1959, Annette Adams-Brown is soft-spoken and unassertive, but as the settled, irascible bourgeois Lena she’s not going to take any crap. Her searing invective in the second act will stay with you for the rest of the year, but you may not wish to repeat it. Tall Al Marshall, always a capable comedian, oozes subversion under that smile.

John Brackett as Russ, the white 1959 home owner, dominates the first 20 minutes with an obscure agony we are slow to grasp. As his wife Bev, Aileen Kenneson starts in Edith Bunker country but has morphed into the boss lady lawyer Kathy in the present. Familiar face John Krenrich stretches the farthest, taking on three roles. Newcomer Lauren Puente makes a smashing debut as two pregnant women, first adorable and vulnerable, then annoying as hell.

Director Dan Stevens has mounted a thoughtful, precise and shattering production. This Central New York Playhouse effort lets you see why Clybourne Park is one of the most honored plays of the last five years.