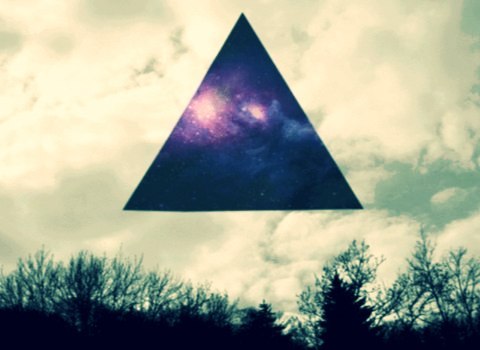 In February 2014, I came across two NY Triangle UFO sightings, I thought they might interest you.

It was about 6:30 in the evening on February 22rd, 2014. In Walton, NY, Tommy, a young grade school student, was outside enjoying a precious few minutes on his swing before supper.

As he was swinging and looking up at the twilight sky on upward passes he noticed at first one bright object. Initially he thought it was an airplane but then many more bright balls of light began appearing in the evening sky. Some had green lights, others red, and still others had orange lights. He tells us that some of them soared around very fast while others flew very slowly. All were noiseless except one, that one made a humming sound. He also says of the bright objects, “some of them went to town,” suggesting that some of the objects appeared to descend toward the town of Walton. Finally, Tommy said he was happy and excited to see them. (Note: Triangle UFOs are sometimes reported to have a humming sound)

A Man and his Dogs

It was about 7:30 in the evening on February 23rd, 2014. In Olean, two dogs named Walnut and Peanut were getting anxious for their evening walk. Charles their owner got the message from his pets. He put on his winter coat and off the three of them went for a stroll.

Charles says that he was standing in front of a neighbor’s house when he noticed a very strange looking wispy cloud that was sort of shallow, V shaped, elongated and stretching west to east. Something just wasn’t natural about this cloud he thought to himself. As he looked closer he was able to make out a dark V shape form. As he observed the object he noted that it was traveling from the east and moving westward and eventually moved out of the cloud.

As he studied the object he noted that it appeared to be dark, perhaps gray and had a series of dim lights. The object was long, flat and appeared to be very large triangle.

Charles saw a high altitude passenger jet at a higher elevation and noted that the black triangle was flying, a slight bit faster. He states it was hard to tell just how high the object was flying but was able to note that it was at it seemed to be flying at an altitude similar to small aircraft. He further states that while he could hear the distance roar of the passing passenger jet, he noted that the dark triangle was totally silent.

He noted that the object’s flight path clearly took it over the town Knapp Creek and would have taken it in the direction of the town of Limestone.

Charles says he couldn’t have been more than several miles from the triangle from his vantage point. He says he lost sight of it after his view of it was obstructed by utility poles.

Let’s look at some other recent New York sightings:

21 February 2014: at about 10:30 p.m. three Glenwood residents were out snowboarding. They decided to take a break off the Trail. They were about to start snowboarding again when they noticed 6-8 green spinning, glowing orbs. They state the orbs were in a hexagon or octagon formation. As they watched, suddenly the green orbs all converged into one object that appeared to lower itself to ground level, where they lost sight of it. They tell us that they aren’t sure if it actually landed.

22 February 2014: at about 11:00 p.m. a Bronx family was coming out of a movie Cineplex. They were marveling at the night sky when someone pointed out five star-like lights flying in a loose formation. They report that after a few minutes of observing them, three of the lights broke off of the formation and flew off in a different direction, while the remaining two continued on their original course. All of the lights just silently vanished.

24 February 2014: at about 9:15 p.m. a Queens’s motorist was waiting at a red light at the corner of 150th St. and 35th Ave facing south when he saw bright light in the sky. He said the object was about 50 degrees off the horizon. He describes the object as having a blue-green glow with no sparks or trail and appeared to be descending at great speed. His view was obscured by buildings. Fearing ridicule if he reported it to the police, he posted his report with MUFON.

28 February 2014: at about 9 p.m. a resident of Cuba, NY reports he was watching the Sabres hockey game on television. During a break in the game he got up to stretch. As he opened the curtain to look out the window he saw a very bright yellow pulsating light hovering just above the tree line south of his property. With binoculars he took a closer look and noted a police car in the general area where the bright light was hovering. After a few minutes the light moved upwards then slowly moved to the east a bit. He says it hovered there for perhaps another 30 seconds, then it blinked twice and was gone.