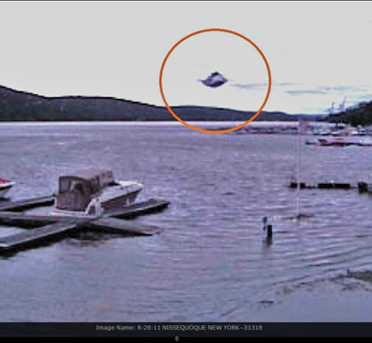 Consider this account and photo of the Nissequogue UFO incident.

It was late August 2011, Puerto Rico and the Great Antilles had been battered by a category three hurricane; that storm’s name was Hurricane Irene. Coastal areas up the eastern seaboard braced for the worst as the storm and it’s 120 mph winds made its way northward, causing significant storm surge and coastal flooding. On the north shore of Long Island, the Suffolk County bayside community of Nissequogue, NY (pronounced NISS-ə-kwog) was dealing with surge flooding.

Charlie, a local boat owner concerned for the safety of his boat, began regularly checking a webcam that monitored the Defeo Marina five miles east at Port Jefferson, where his boat was moored. It was about 2:30 pm on Sunday August 28 when Charlie logged into the camera to check the flood conditions.

Charlie tells us: “I witnessed a large silver round disc type object in the sky over the flooded bay. I watched it live for a few minutes as it hovered in the same spot rotating around. My first thought was that someone might be launching a weather balloon but I soon realized that the object had lines and a structure that didn’t look like a balloon.

Charlie took three screenshots of the live web cam, each of the images were about 10 seconds apart.
“It appears in the pictures that you can see the craft rotating toward the camera.” 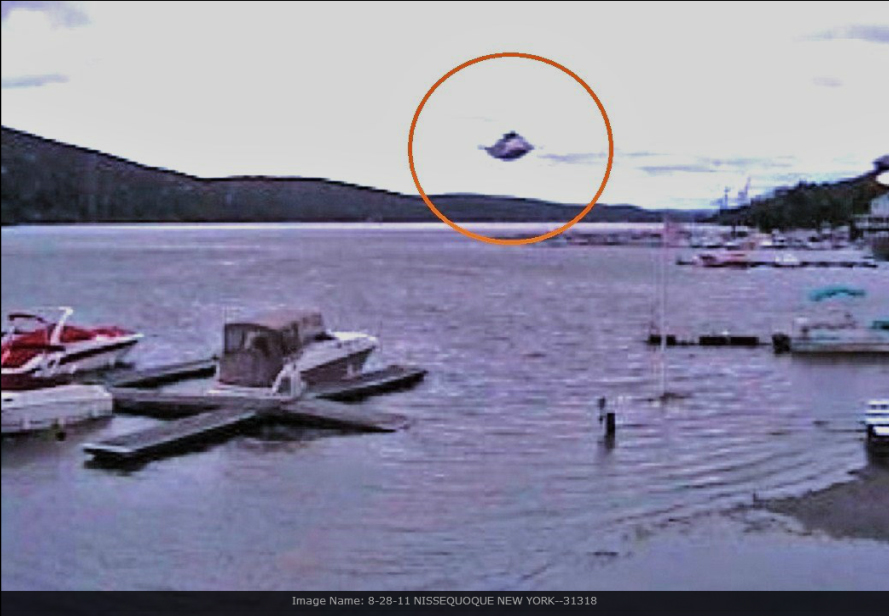 Charlie took three screenshots of the live web cam, each of the images were about 10 seconds apart.

Later Charlie spoke to the marina management to see if the live cam was recorded but unfortunately it wasn’t. Charlie tells us that because of the severe weather warnings at the time of the UFO sighting most of the coastal communities were evacuated; likewise no airplanes were flying in or out of the regional New York airports. Charlie later filed a report and posted his photos with the Mutual UFO Network (MUFON), case number is 31318.

25 November 2014: at about 4:45 p.m. a married couple was driving over the Mohawk river bridge and noticed a blue green ball of light go across the evening sky leaving a small contrails behind which would disappear immediately, it made no sound.

28 November 2014: at about 7:30 p.m. a resident of Hudson, NY was walking his dog. While looking up at the moon in the clear sky, he noticed a ball or orb of bright red to fire orange, it was traveling from the south and it was heading north. It made no noise and it seemed to change size as it brightened and dimmed.

28 November 2014: at about midnight a resident of Tuxedo Park, NY was cross country skiing when he noticed a geese like V shaped flying formation. He started to pay attention to the object and noticed lights instead of geese. In front of V formation there were about 5 to 7 lights and lines forming letter V were also white amber lights. All the lights in the formation kept their position without any changes. Color of lights was bright white and looked recessed. The object moved from the Northwest to the Southeast.

9 December 2014: at about 9:50 p.m. a resident of Highland, NY was bringing home a Christmas tree. He got a strange feeling to look up and about 300 feet above him was a black triangle shaped craft. He says it hovered in place for nearly 20 minutes. He admits it scared the heck out of him.

10 December 2014: at about 5:30 p.m. a motorist in Pittsford, NY was flashes of orange and green lights in the sky, moving in an orderly fashion.

14 December 2014: at about 9 p.m. a Brooklyn, NY motorist driving on an elevated highway saw four or five glowing orange lights in the sky that were in a formation with a helicopter hovering around nearby. When he exited the highway he lost view of them. He states that several other people he knew on Facebook witnessed the same event.