The summer of 1975 witnessed the June UFO Cluster.

“This sighting happened maybe two weeks after the Grand Island sighting … there were a lot of UFO sightings in the greater Buffalo area in 1975,” Ronald tells us. “I was up on the 2nd floor of my home on Keller Ave. and watching TV when I saw some lights flashing outside the window.”

Ronald opened his window saw a craft of some sort hovering in the air. He makes a specific point of explaining that it was shaped like “Jell-O mold.” Ronald hastily grabbed his telescope and quickly set it up to get a closer look.

“It was just sitting there in the sky.”

He realized that it hovering very near where his mother was living at the time. So he called her up, and the two observed the craft and discussed what it might be on the phone for nearly 45 minutes. He says his mother estimated that it was hovering perhaps 200 feet about the ground near his mom’s residence. Ronald describes the craft as dark blue with a large pedestal section on the bottom. He says that it had large panels all the way around it. Near each panel there was a round light. The panels themselves had a thick milky looking glass appearance.

“Each one of the lights was a different color seemed to come way from the side of the craft.  The lights would get dim and grow very bright then dim again.”

He explains that  on the top there was a main section that was shaped round like a pail upside down.

“All around that pail shaped sections were smaller boxy looking forms with odd shapes. The whole craft was a flat gun metal blue.”

Using his highest zoom on his telescope he gave the craft a good look over. He was looking for welds, screws or something that might give a clue to how it was constructed but he saw no evidence of tool marks of any kind.”

“All at once it turned off all its lights. It seemed to shift to the left. I noted that when the lights went off the craft seemed to fade or get fuzzy like an old TV when the picture gets grainy and fuzzy. As it appeared to fade the craft zipped away. Moments later three or four Air Force jets showed up.”

Ronald told us about the summer in 1975,  June UFO Cluster as he saw it. As a researcher I wanted to see just how hot a sighting summer in was in 1975.  I went to the NUFORC and MUFON databases and extracted information. The first thing you must take into account when looking at this data, is that it is scant. Sighting reports were done via letters, phone messages and newspaper clips sent to MUFON. Online reporting didn’t really become a viable thing until the mid-1990s. So a year’s sightings in 1975 for the whole country looks like a modern sighting report for a state like New York for a single year these days.

For the year 1975, the whole United States had about 503 reported sightings based on the two national data bases. There may have been many more that number but if someone didn’t send in a clipping it just didn’t get logged. 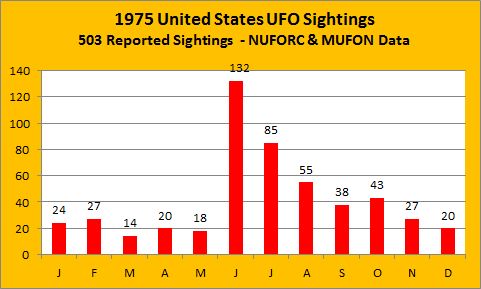 A look at New York State’s sighting numbers shows us that our home state followed the trend. In fact for June 1975, New York had about 7% of the nation’s sightings. Most of those sightings were in Erie County which by the way is number three in the state for highest levels of UFO sightings in New York State for the past 15 years. 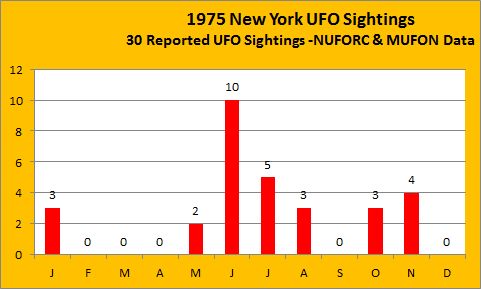 Why is this? I wish I knew. There is something that is called the Erie Lake effect, around Erie lake there are large amounts of sightings. In fact all around most of the Great Lakes there are unusual amounts of UFO sightings. WHY?  Nobody knows!

14 April 2015: at about 8:30 p.m. a resident of Fullerville, NY witnessed four or five disc shaped objects with red & yellow lights rotating around horizontal axis, blinking out in one spot reappearing in another.

16 April 2015: at about 11 p.m. a resident of Fort Ann, NY took a photo with her phone and later noticed an unknown object of unusual shape traveling in a straight line in the image.

16 April 2015: at about 11:30 p.m. a resident of Niagara Falls, NY observed a glowing red orb traveling across the sky which split into two orbs after dropping a white orb first.

17 April 2015: at about 6 p.m. a Garden City, NY resident observed a bird like object that then transitioned to an orb meeting with other orbs that then ascended skyward before disappearing!

17 April 2015: at about 10:30 p.m. a resident of Port Jefferson, NY was driving home from work on her normal route when she observed red and blue lights hovering. She stopped her and watched the hovering lights. Suddenly the light started moving higher and she attempted to record the object with her cell phone.

If you are interested in joining a new monthly UFO discussion group in Onondaga County area drop Cheryl Costa an email for more details:  [email protected]

If you have a UFO sighting to report, you can use either one of the two national database services: www.NUFORC.ORG or www.MUFON.COM  – Both services respect confidentiality.