It was about 10:20 p.m. on June 2nd 2000 when a couple of Mineola, NY residents noticed something in the northern sky that appeared to be wobbling back and forth. The two brothers scrambled for a set of binoculars that they had. After a few minutes of observation one of the young men exclaimed, “It’s a UFO.”

The other man was skeptical and thought it might be a commercial aircraft and snatched the binoculars for a look.

He tells us, “I took the binoculars and zeroed in on the object. I could not believe what I saw. It was not an airplane.”
What the two young men observed a rare cylinder UFO that eventually turned some 30 degrees to the right and disappeared in the haze.

Six days later on 8 June 2000, a Staten Island, NY resident witnessed a huge cylinder UFO with an estimated 400 lights on it.

“My friend first saw the cylinder UFO high in the sky; it was even more visible than the moon at 9:00 PM. It was a bit taller than the moon and about four times wider. It was bright white and he could see flashing lights on the bottom of the cylinder shaped object. The cylinder was totally silent!”

He tells us that an additional half dozen neighbors saw the craft as well as a couple of police officers.

Records prior to 1950 report virtually no cylinder UFO sightings. The decades of the 60s, 70s, 80s, and 90s sport sighting levels with an average of about two sightings per decade. Around the year 2000, sightings began to increase to a little under a dozen per year.

Then in 2009, it was if some intergalactic starship dealer threw a gigantic sale because suddenly huge cylinder UFOs began appearing in New York Skies at a rate of about a dozen a year, as evidenced by the following chart. 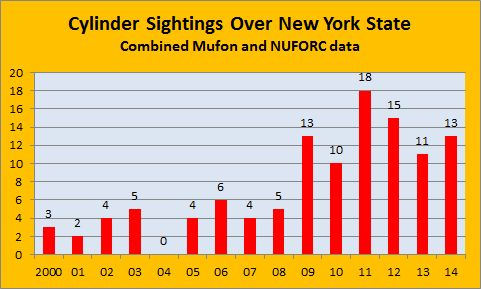 World sightings for cylinder UFOs likewise has been on the rise. For example, the combined cylinder sightings from both the MUFON and NUFORC for 2014 total about 258 globally; giving New York State about 5% of the world cylinder sightings. I hope to continue my analysis of various classes of UFOs and their relative sighting numbers here New York.

27 December 2014: at about 7:15 p.m. a resident of Millbrook, NY observed blinking, wavering aircraft that shot off and disappeared.

27 December 2014: at about 10 p.m. a resident of Carmel, NY witnessed two red triangles flying close to the ground making no noise over Carmel.

29 December 2014: at about 6:30 p.m. a Yorktown, NY motorist saw an object out of the side of his car. He reports that it was large with a big neon green glow and that it disappeared shortly after he began observing it.

29 December 2014: at about 6:30 p.m. a resident of Ballston Lake, NY observed two large very bright, circular, white UFOs that appeared in a linear pattern for a brief moment then disappeared.

If you have a UFO sighting to report, you can use either one of the two national database services: www.NUFORC.ORG or www.MUFON.COM  – Both services respect confidentiality.