Survivors roundly criticized the move as a step backward

More than 7,800 people have signed an online petition calling on Syracuse University Chancellor Kent Syverud to reverse course and reopen the Advocacy Center, the office at SU that until its sudden closing earlier this month served student rape victims and others dealing with sexual assault or relationship violence.

The Advocacy Center was in the Health Center at 111 Waverly Ave, until its closing June 4. Students dealing with sexual violence will be directed instead to the Counseling Center, 200 Walnut Place, which helps students with emotional and mental health issues.

According to the university, the move was made after a two-year process “to create a stronger and more integrated set of university support services for students impacted by sexual violence.” The move comes as campuses across the nation are facing increased legal and governmental pressure to make students safe from sexual violence and harassment.

A fact sheet posted online by SU states that designating the Counseling Center as the point of entry for survivors will streamline and centralize services. The sheet says there were five points of entry for people seeking such assistance, and students expressed confusion about where to turn. SU also says that the Counseling Center will hire two therapists specializing in assisting survivors of sexual violence; one such staffer has already been hired.

Students and advocates for rape and sexual violence survivors roundly criticized the move as a step backward.

Sarah Ann Myers is a 2013 SU graduate who volunteered at the Advocacy Center for all four of her undergraduate years and opposes the new arrangement.

“We see this change as problematic,” Myers says. “Mental health and sexual assault or relationship violence are separate things. Not all survivors of sexual assault want counseling.” Having prevention and outreach and education services for survivors under one roof has a “big impact” on the understanding of the issue on campus. “Advocacy,” she contends, “is not the same as counseling.”

“The Counseling Center is valuable,” says Myers, who has signed the petition, “but it is not a reason to close the Advocacy Center.” She says that the petition organizers have not heard back from the university. “We want to hear back from them that they have heard our concerns.”

Kate O’Connell is a social worker and former candidate for Syracuse mayor. She was the executive director of the Rape Crisis Center (since merged with Vera House) at the time the SU Advocacy Center was formed in 1990. She served on the task force that led to the creation of the Advocacy Center, then known as the R.A.P.E. Center.

“I’m afraid the university doesn’t serve its students well by changing this,” O’Connell says. “Rape is not a counseling issue, it’s a victim issue. They are not the same thing. There’s already huge underreporting of rape … especially on campuses. The suggestion that you’re making this ‘simpler’ just doesn’t hold a whole lot of water.”

“It’s always troubling,” adds O’Connell, “when a set of services that need to have a unique identity get folded into a larger entity. I’m afraid it will get lost in the shuffle.”
Randi Bregman, the executive director of Vera House, agrees that the blending of the two services is a bad idea.
“I think it was the wrong decision,” said Bregman. “In an initial meeting with the dean of students and her staff, my hope would be to reverse the decision, but I didn’t hear a lot of openness.”

Like others close to the issue, when Bregman first read the chancellor’s memo, she didn’t understand that it meant closure of the Advocacy Center.

“A lot of people didn’t know what it meant,” says Bregman. “I saw the email saying it was being consolidated. I would say it was Orwellian. If you’re closing it, just say so.” 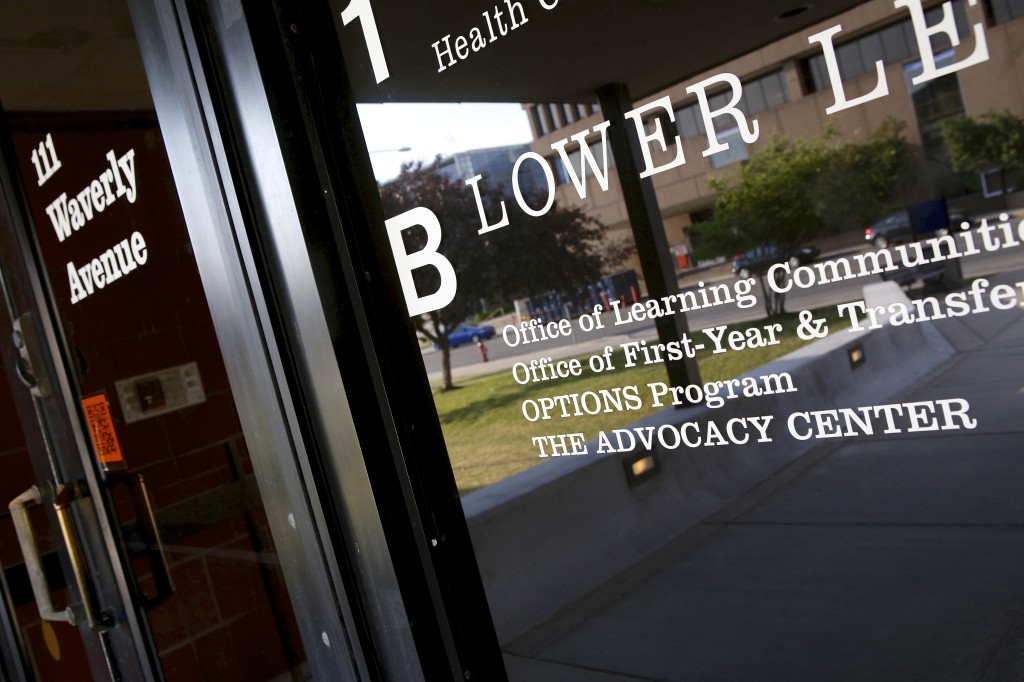 The university maintains that recent legal actions have caused them concern that the Advocacy Center could not offer full confidentiality to their clients and would place SU in violation of Title IX of the 1972 Education Amendments to the Civil Rights Act. Title IX, best known for requiring women’s athletics to be on an equal footing with men’s, also says that a campus environment that is permissive of violence toward women is a form of discrimination.

According to a fact sheet published April 29 by the White House Task Force to Protect Students from Sexual Assault, “by law, schools that receive federal funds are obliged to protect students from sexual assault.” According to the Chronicle of Higher Education, the federal Department of Education is investigating as many as 60 colleges accused of violating gender-equity laws involving sexual misconduct.

Dean of Students Rebecca Reed Kantrowitz heads the Division of Student Affairs, the office that oversees the Counseling Center. In a letter published in The Post Standard on July 24, Reed Kantrowitz wrote that the new structure affords students “maximum privacy under the law.”

“We have a different interpretation of Title IX,” says Bregman. “There was a sense on campus that the Advocacy Center had to report a lot more info. We were working to address that.”

Asked what a student arriving in the fall who finds herself confronted with sexual violence will do compared to last year, Kate O’Connell thought for a moment and said, “I don’t know. That’s a good question.”

“The Division of Student Affairs will be realigning key departments to create a stronger and more integrated set of university support services for students impacted by sexual violence. Currently, there are more than five different points of entry within the university for students seeking these services. Under the new structure, the Counseling Center will serve as the primary entry point for students who have been impacted by sexual violence and who need access to confidential and privileged services. The services of the Advocacy Center will be integrated and aligned with the Counseling Center, Office of Student Assistance and Office of Health Promotion. Under federal guidelines, Advocacy Center staff are not able to provide completely confidential and privileged services to students impacted by sexual violence. Under the new structure, the director and the sexual health coordinator at the Advocacy Center will have positions that enable them to continue providing students the important advocacy and education services they currently offer.”

Interview: David Cobb
Lesbian Mothers Forced to Choose Their Lovers or Their Children
To Top