Here’s a heaping portion of reality: Feb. 11, 2014, was the biggest day in Syracuse history. Period.

Bigger than the 2003 men’s basketball championship.

Bigger than that glorious spring morning in 1927 when a young inventor, Charles Brannock, tried out his new foot-measuring device for the first time and proclaimed, “Eureka! I’m a size 17 extra narrow! No wait. That doesn’t sound right.”

It was even bigger than that magical day in 1905 when composer Thomas Allen reworked his new folk song about the Erie Canal, scrapping the original lyrics:

I’m in love with a mule, and his name is Hal
Deal with it folks, I don’t want no gal

None of those events rival the significance of the grand opening of our very own Cheesecake Factory at Destiny USA. Finally!

Would it shock you to learn I was first in line, arriving shortly before 6 a.m., for the 11 a.m. opening? As a matter of full disclosure, I was the only person in line for the first three hours. That was a little weird.

“Would you mind if we interview you?” Time Warner Cable News (Channel 10) reporter Brad Vivacqua asked me. Mind? Of course not. When you’re a maker of history, you belong to the public domain.

“I want to feel full just to the point of feeling sick,” I told the region’s leading cable news provider.

I came prepared for my date with Destiny. I brought a lawn chair, nutrition bars and a special enzyme beverage to keep from passing out. As the morning wore on I could see the pace inside the restaurant quickening.

“Thank you so much for being first,” he said.

Accompanying Fortuna was Lewis Schwartz, area director of operations for Cheesecake Factory. As a reward for me being No. 1 in line, he graciously offered me a free pasta dish to take home to my family or, given the size the restaurant’s portions, the 10th Mountain Division at Fort Drum. Lewis took my picture to send to corporate. Later, Destiny USA officials also took my photo–the first time they’ve captured my likeness with a camera that was not part of their security operation. Unless it was.

Oh, yeah, this was big. It was more than a decade ago that rumors began to swirl that Syracuse might have a shot at one of these domiciles of diabetes. Indeed, a Cheesecake Factory seemed a perfect fit with Earth Firster Robert C. Congel’s vision of a green supermall choked with road-raging motorists driving around in search of parking. Or to put it another way, what could be more environmentally friendly than 2,000-calorie entrees finished off with cul-de-sacs of cheesecake containing five times the recommended daily allowance of fat for a juvenile sperm whale? 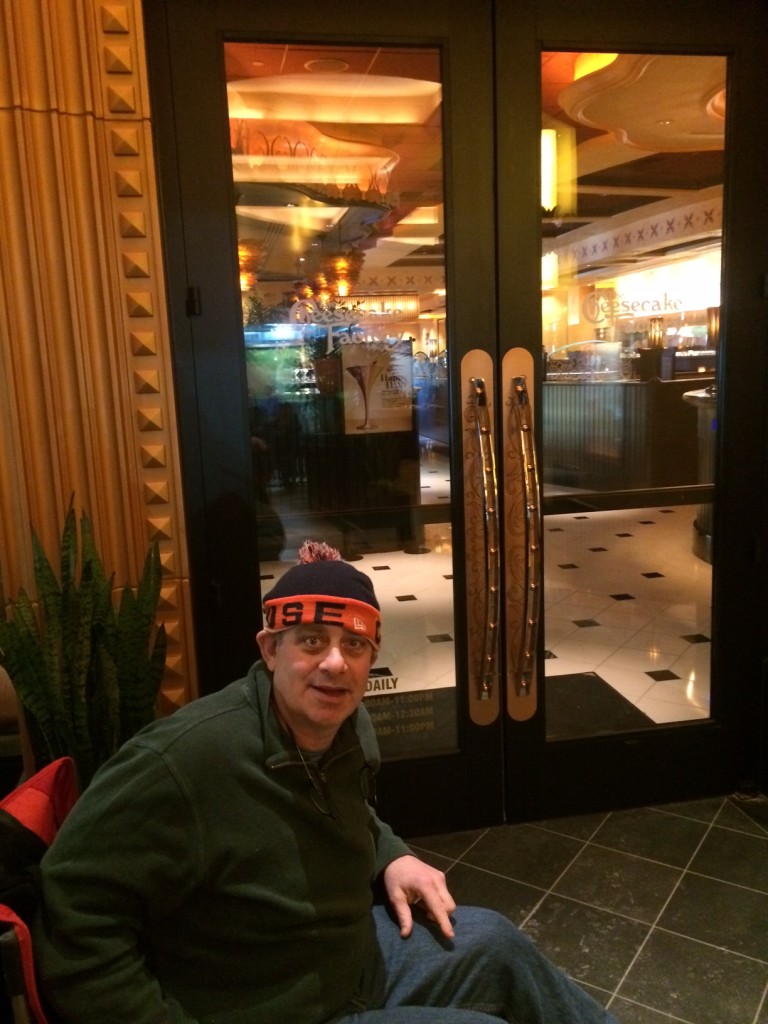 Finally, about 9 a.m., another customer joined me in line. Gary Philips, of Liverpool, has been a Cheesecake Factory devotee since the 1990s. He credits the restaurant for giving him something to look forward to when he was tending to his ailing mother in Boston. During that time he ate twice per weekend at the Cheesecake Factory, never ordering the same thing twice. He is so loyal to the chain that he even gave up his treasured morning basketball game to come to the grand opening, despite having already attended a mock opening last week. He carried with him a Cheesecake Factory menu that is almost 20 years old.

“I don’t bring it with me everywhere,” he told me, as if I might find that odd.

But I get it. This is how we roll in The ’Cuse. Where other cities issue a collective yawn when a new chain opens, we go bananas because. . .  actually, I don’t know why. But let’s eat.

The feeling I had as I strode into the Cheesecake Factory, greeted by handshakes and cameras flashing, was unlike any I have known. Yes, there was my wedding day, and the birth of my kids and blah, blah, blah, but this was freakin’ intense.

Gary and I split a Heart Healthy order of tater tots infused with cream, three cheeses and rendered bacon–an appetizer served only at this store. In honor of Shirley Temple, the former child star who went to that great bowl of Warm Crab and Artichoke Dip in the Sky the night before, I ordered her namesake beverage. For my main entree I had the Chicken Madeira, CF’s most popular dish, which features a sautéed poultry farm slathered in mozzarella and a Madeira mushroom sauce whose rich sweetness was challenged only by my double triangle of banana cheesecake.

Gary ordered a salad, presumably so he would not have to share with me.

We left happy and full and edified by the knowledge that in the grim pecking order of struggling Rust Belt cities, Syracuse just clicked up a few notches.

“Thank you, Cheesecake Factory!” I shouted to the throng of workers who bid me goodbye with great fanfare. “Welcome to Syracuse!”

The crew made me feel like a movie star.

For more stories like ‘Let Them Eat Cheesecake’ – READ KRAMER