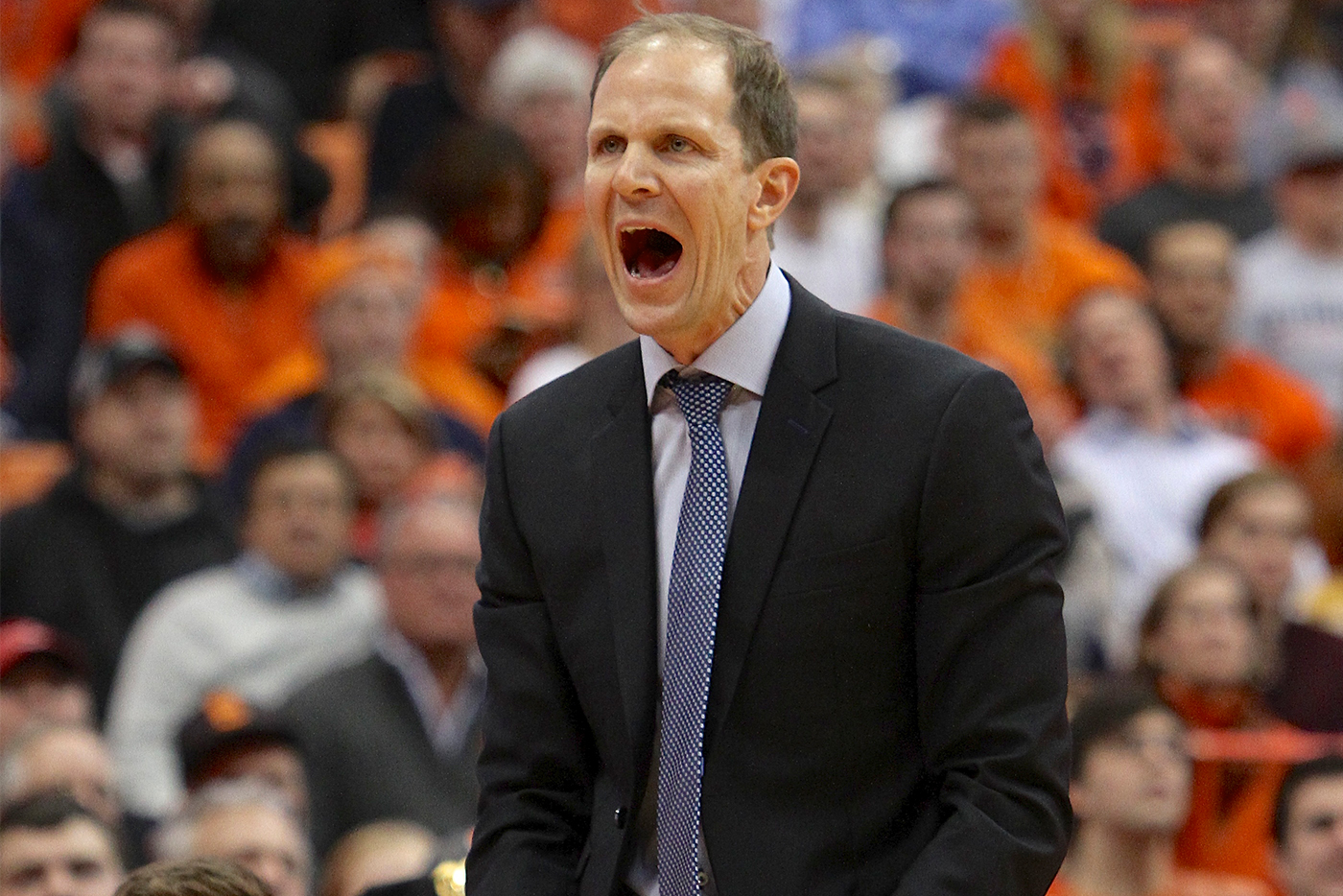 In the aftermath of the Syracuse University men’s basketball team’s season-ending 85-80 loss to Mississippi in the second round of the NIT March 18 at the Carrier Dome, we can safely say there are only three certainties about next season for SU:

1. The Orange will play better defense, because it can’t get much worse than this season.

2. Next season won’t be Jim Boeheim’s last as SU’s coach.

3. Even if Steph Curry and Kevin Durant decide to finish their college eligibility at Syracuse next season, Boeheim will never, ever say again that he has a talented team.

Boeheim, who completed his 41st year at SU, said the loss to Ole Miss was a microcosm of the Orange’s 19-15 season: If Syracuse didn’t shoot well, it didn’t win because it couldn’t stop the other team’s shooters. Ole Miss shot a whopping 46.9 percent from 3-point range (15 for 32), while the Orange couldn’t overcome an 8-for-30 effort from beyond the arc that included misses on its first nine attempts.

“We’ve never got out of the mentality that you have in high school where you hope they miss,” Boeheim said. “You have to get up and you have to guard the shooters.”

Back in the fall, before practice even started, Boeheim made a remark to ESPN that, “This is the best team we’ve had in a long time.” The Orange did finish 10-8 in the ultra-competitive Atlantic Coast Conference and defeated three then-top-10 teams, but in the end it wasn’t even the best NIT team that SU has had in a long time.

“I tried to be optimistic, which you can’t do because people like you (in the media) and other people always go back,” Boeheim said. “I’ve already corrected that 10 times. On paper, looking at what we had coming in, it looked like we had more talent than we’ve had in a while. That’s exactly what I said. Not in Syracuse basketball history; in a while. And after we started playing, I saw right away that we don’t have that kind of a team. 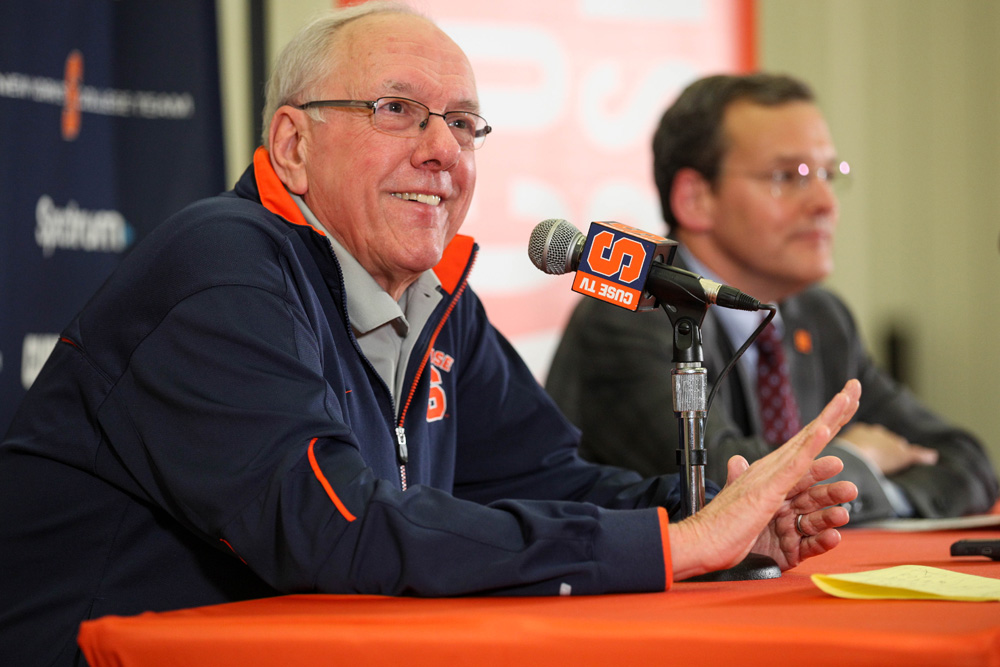 “I made a mistake,” Boeheim added. “I could have the Golden State Warriors here next year and I’ll say, ‘I don’t know how we’re going to win’ because you can’t say something like that.”

Less than 24 hours after the loss to Ole Miss, the University of Washington announced it hired longtime Orange assistant Mike Hopkins as its head coach. Hopkins was supposed to replace Boeheim after next season. Instead, Syracuse announced that it had extended Boeheim’s contract beyond the 2017-2018 season; it didn’t say how far beyond, however.

“Mike accepting the position at Washington has put us in a unique position,” Syracuse athletic director John Wildhack said in a news release. “The circumstances are different now than they were when he was named head coach-in-waiting.

“After discussing it with Chancellor (Kent) Syverud, we believe the best decision for the student-athletes currently in the program and those who are committed to attending the university is to extend Coach Boeheim’s contract. Jim has enthusiastically agreed.”

So, the 2017-2018 season won’t turn into Boeheim’s “farewell tour.” And the Orange should play more defense and be less optimistic. But beyond that, there are several remaining questions that will be asked here and answered throughout the offseason and into next year. 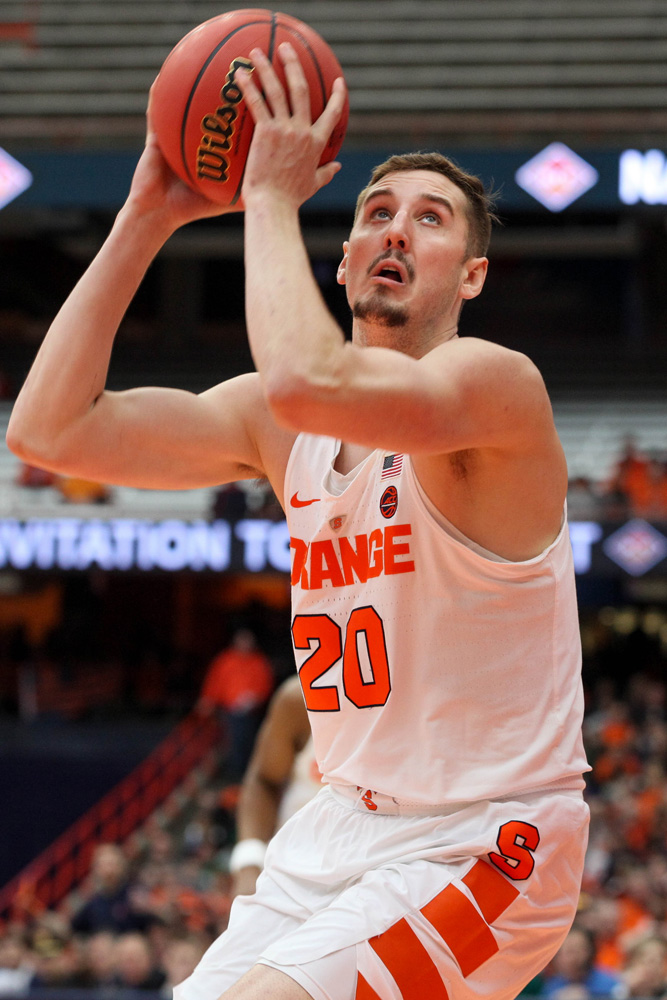 Lydon, a 6-9 sophomore forward/center, was a preseason Naismith Player of the Year candidate whose statistics didn’t quite match the hype. He averaged 13.2 points and 8.6 rebounds per game and was by far the Orange’s best defensive player, but he didn’t dominate games in ways you’d expect from a first-round NBA draft pick.

Still, many mock drafts project Lydon to be a mid- to late first-round pick if he enters the draft, and on Monday, March 20, John Rothstein of CBS Sports reported that Lydon will sign with an agent and will enter the NBA draft. If that report is true, Lydon’s loss with leave a huge hole in the Syracuse roster.

What about Tyus Battle and Taurean Thompson?

Like Lydon, it’s clear that Battle and especially Thompson have some work to do before they can play in the NBA. But they’re NBA talents, and they wouldn’t be the first not-ready-for-prime-time freshmen who took the money and playing in the NBA Development League over another year of college.

For his part, Thompson said he’s focused on staying at SU and getting better, particularly on defense.

“I’m just trying to get into the gym, because I’m not ready,” he said. “I honestly have a lot of work to do. I’m not worried about all that (NBA talk). If an opportunity presents itself, I’ll see. Right now, I’m just focused on the gym, really.”

And while Battle seemed to leave the NBA door at least slightly open, he talked excitedly after the Ole Miss game about coming back next year and playing with Matthew Moyer, his college roommate. Moyer, a 6-8 forward, was redshirted after missing much of the preseason with a foot injury.

“Nah, I haven’t gave it much thought at all,” Battle said about the NBA. “I’m just looking forward to improving my game and helping this team win.”

Even if Lydon stays, Battle and Thompson could develop into SU’s most dynamic scorers. Boeheim said the 6-6 Battle, who averaged 11.3 points per game and was the Orange’s best penetrator on offense, “has a chance to be a special player.” And Boeheim said the 6-10 Thompson, who averaged 9.2 points and 3.8 rebounds in 17.9 minutes per game, could have averaged 15 points per game if he had played strong enough defense to stay on the court for most of the game.

How much help will the Orange get from Moyer, Pascale Chukwu and the incoming freshmen?

This answer could decide whether we’re talking about the NIT again next season.

Moyer’s teammates say he’s an “energy guy” who has played well in practices since returning from his injury. Chukwu, a 7-2 redshirt sophomore who transferred from Providence, averaged 1.7 points and 4.1 rebounds in 15.4 minutes per game before a right eye injury ended his season. Chukwu required three surgeries to restore his vision, but he is expected to make a full recovery for next season.

None of the Orange’s three committed recruits — 6-8 forward Oshae Brissett, 6-10 center Bourama Sidibe and 6-3 point guard Howard Washington — is a top-50 recruit, but that doesn’t mean they won’t become impact players. But what’s their learning curve and how much can they help next season?

With Lydon gone, Syracuse will have two scholarships available. Syracuse.com reported that Syracuse and Duke are interested in Tremont Waters, a highly rated point guard in the 2017 class who previously committed to Georgetown but changed his mind. It appears the Orange will have to strike gold again like last year, when Thompson was a late-signing recruit and Andrew White and John Gillon were imported as fifth-year senior transfers.

“We’ll look to bring somebody in,” Boeheim said. “I like the three guys we’ve got commitments from, (and) we’ll try to find somebody else. We’ve got some good young players, we just got to get some help for them. Especially inside, I think the guys we have coming will help us.” 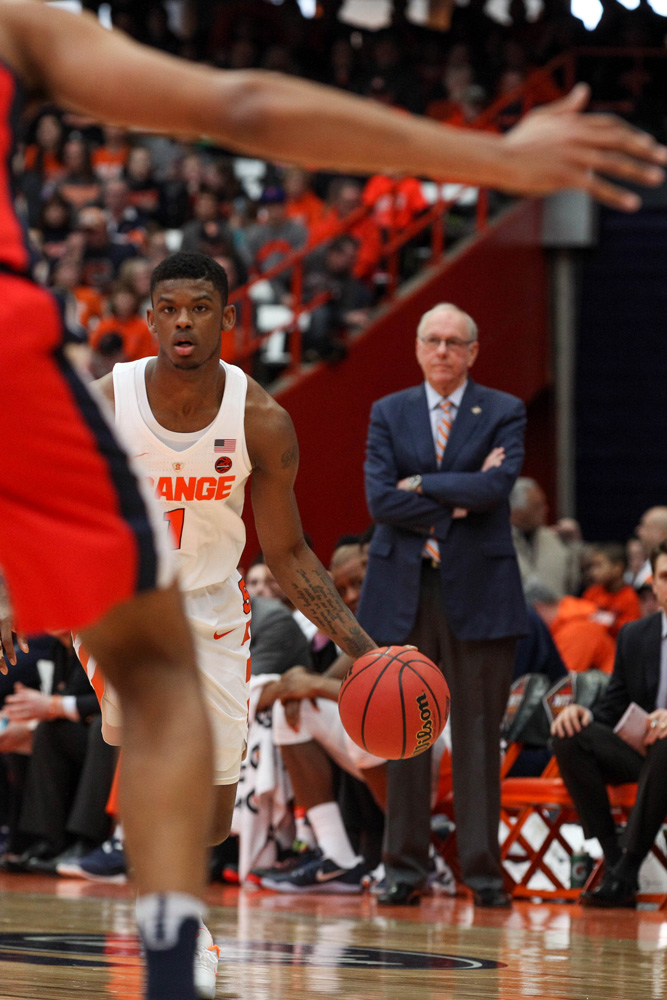 Howard, a 6-5 sophomore, opened this season as a starter but eventually lost that job to Gillon and watched his playing time dwindle. After one late-season loss, Boeheim defended Gillon’s spotty play that night by saying he was “10 miles ahead” of Howard as a point guard.

Following the loss to Ole Miss, Boeheim said Howard “showed signs” of being a good point guard but was too inconsistent.

“I really think he’s a good playmaker who’s developing his shooting and he gives us good defense on the other end,” Boeheim said. “He’s our best defensive player at the other end.”

Howard’s demotion led to speculation that he could transfer. If Howard does leave and Waters doesn’t sign with SU, the Orange might have to look for another Gillon-type to run the point as a fifth-year senior.

Will SU come up with another succession plan for Boeheim?

Two years ago, when the Orange self-imposed a postseason because of multiple NCAA violations, Syracuse announced that Boeheim would retire after the 2017-2018 season. In early February this year, Wildhack affirmed that plan in an interview with ESPN Syracuse radio.

And as part of the plan announced in 2015, Hopkins was named head coach designate as SU Chancellor Kent Syverud officially acknowledged Hopkins as Boeheim’s successor. SU said it extended Boeheim’s contract because Hopkins left. But maybe it was the other way around, that Hopkins left once he knew Boeheim’s contract would be extended.

Either way, Boeheim will turn 73 next season and he’s not going to coach forever. Adrian Autry, who has been on Boeheim’s staff since 2011, was elevated to associate head coach and will be the leading in-house candidate for the time being.

But stay tuned. As the first two days after the final game proved, this offseason may turn out to be more interesting than this past season.

Orange Women Fall to No. 1 UConn

Following eighth-seeded Syracuse University’s 85-65 romp over ninth-seeded Iowa State March 18 in the first round of the women’s NCAA Tournament, Cyclones coach Bill Fennelly said out loud what many others were thinking: How did the selection committee make the 21st-ranked Orange a No. 8 seed?

“That’s an outstanding team,” Fennelly said. “If that’s an eight seed, man, ooh, I’d like to see how they came up with that.”

Not only that, but the committee placed Syracuse in the same region with the mighty Connecticut Huskies. As a result, the Orange’s season ended earlier than it should have as No. 1 overall seed UConn routed SU 94-64 in the second round Monday night, March 20, on the Huskies’ home court, Gampel Pavilion in Storrs, Conn.

Connecticut, the four-time defending national champions, raced out to a 28-11 lead after the first quarter and cruised to its 109th consecutive victory. The rematch of last year’s national championship game was a mismatch from the outset, as the 34-0 Huskies shot 66 percent overall and 57 percent from 3-point range in the opening quarter.

SU guard Alexis Peterson, the Atlantic Coast Conference’s Player of the Year, scored 25 points with five rebounds and four assists. Fellow seniors Brittney Sykes (15 points for her 32nd double-digit scoring game of the season) and Briana Day (13 points, six rebounds) also played their final game for the Orange as they formed the most successful class in SU women’s history.

“At the end of the day, we lost twice to end our season to the best,” Hillsman added, referring to last year’s title game. “We have to do all we can to get better and be able to compete at a higher level in the future.”