As the CSA (community-supported agriculture) sign-up season kicked into gear in February, Matt Volz found himself in an unusual place: parked in a chair at the computer for two to three hours at a stretch, processing registration forms and payments and answering questions from customers.

“And that was enough for me,” Volz says with a laugh. “A big draw of farming for me has always been being outdoors. I just wanted to be outside.” 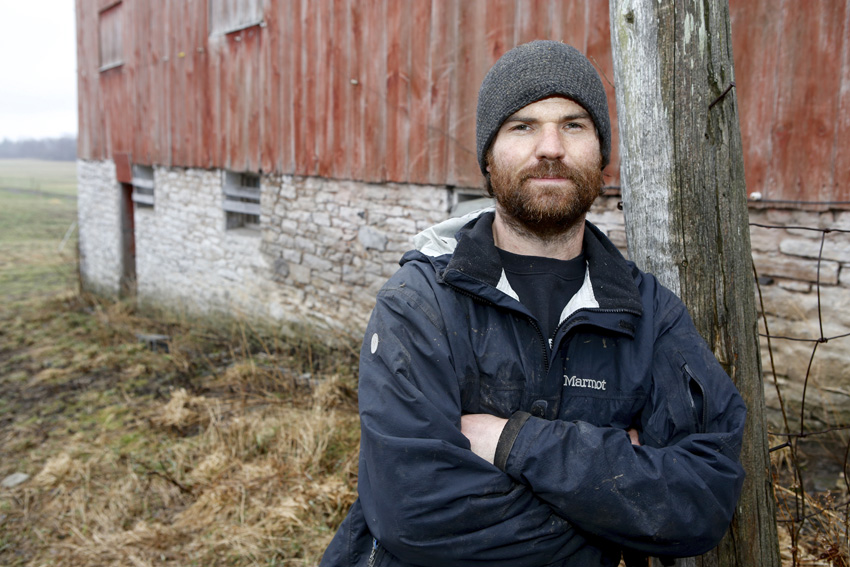 Volz gets his fill of fresh air daily, in all seasons. He rises before dawn to milk the cows, then dives into the list of chores on his to-do list at Greyrock Farm, the diversified farm he established near Cazenovia in 2010. Greyrock is a year-round, full-diet CSA — the only CSA in Central New York to offer its own produce, pastured beef, pork and chicken, eggs from pastured laying hens and raw milk (from a small herd of Brown Swiss cows) 52 weeks a year.

As if that weren’t ambitious enough, Volz and his crew rely on a team of strapping draft horses, Percherons named Pearl and Pat, to help them get their job(s) done. Tractors are used for some work, but horsepower cuts down on Greyrock’s dependence on fossil fuels (and expenses) and supplies the manure that is the farm’s primary fertilizer.

A visit to Greyrock, now in its fifth season, is a reminder that food doesn’t just magically appear in the produce, meat and dairy departments. It’s produced by smart, thoughtful people who love the land and treat it with respect, raise animals humanely and labor from dawn to dark to bring us food to nourish our bodies. 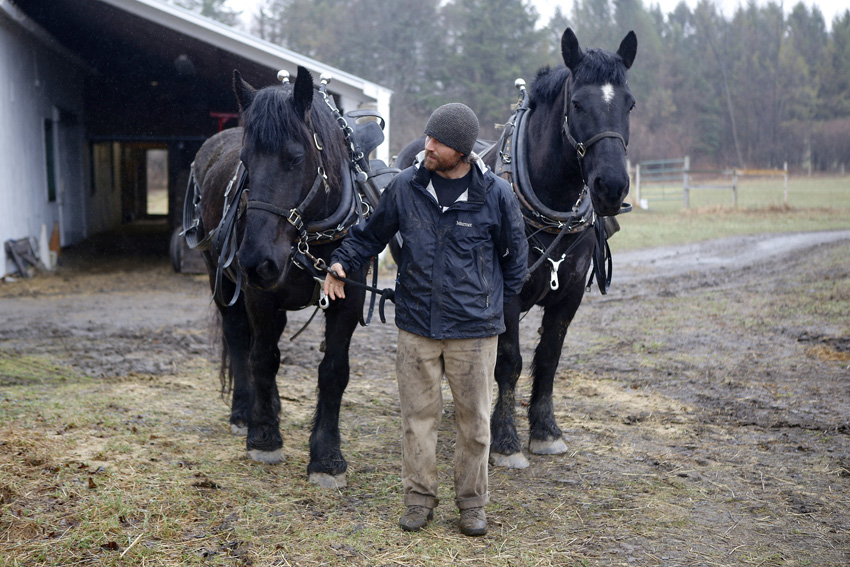 Volz and his crew rely on a team of strapping draft horses, Percherons named Pearl and Pat, to help them get their job(s) done.
Michael Davis Photo | Syracuse New Times

“I don’t know anyone (in Central New York) who’s doing what they’re doing at Greyrock,” says Neil B. Miller, of New Woodstock. Miller is the founder and owner of Farmshed CNY (which publishes an online and mobile directory of regional farms, farmers markets, CSAs and food producers) and the Farmshed Harvest Food Hub, which exists to connect farmers with restaurants and retail connections.

“It’s extraordinary,” Miller adds, “and they’re making a go of it. They’re really doing something special there.”

“It’s hard work,” Volz says of farming, “but I really like what I do.” 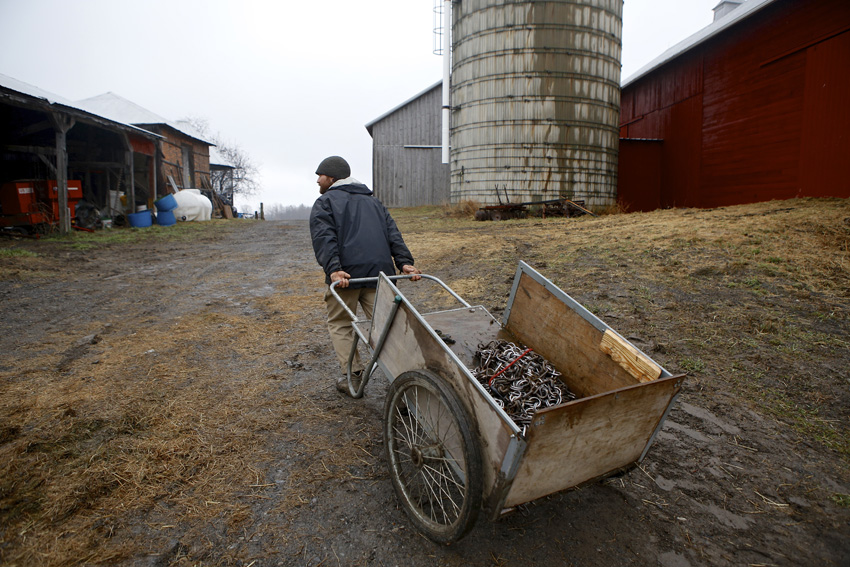 “It’s hard work,” Volz says of farming, “but I really like what I do.”
Michael Davis Photo | Syracuse New Times

‘Everybody Needs to Eat’

Volz, 31, is the founding farmer and general manager of a small crew about to blossom as full-time employees come on board for the growing season. Also in lead roles are vegetable manager Gillian Goldberg, Volz’s partner, whose job is about to ramp up with the planting of dozens of varieties of produce over 12 acres of farm fields, and livestock manager Jon Mahoney, who oversees the daily care of beef, pigs, chickens and laying hens. Volz hopes to soon hire a “three-quarter time” dairy manager to oversee the 12 milkers and seven heifers and take charge of the milking and bottling of milk for sale, as well as a “teamster” for vegetable field work and a variety of chores with the horses. 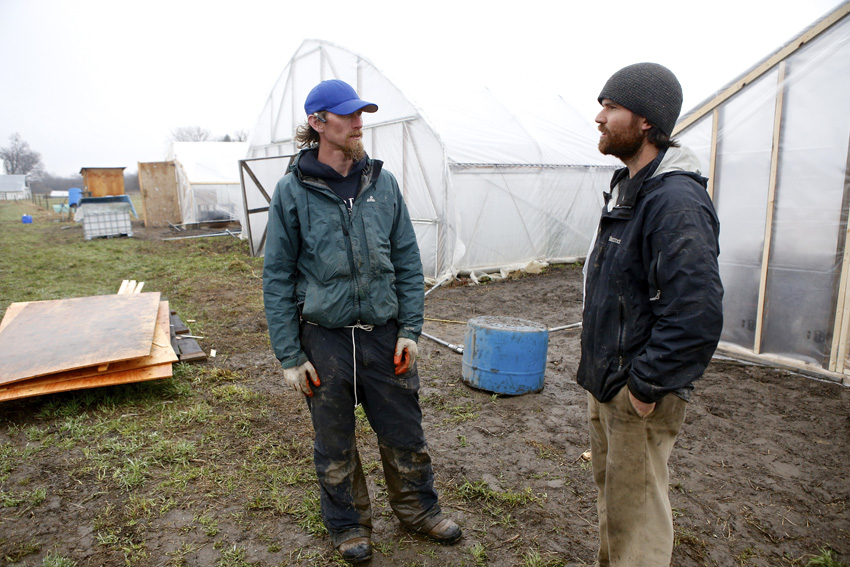 Employees eat lunch as a crew and share cooking and cleanup duties. On a recent Friday, the crew ate pasta and pesto and discussed a variety of topics, from setting up for that afternoon’s farmstand to how fast the newborn piglets are growing to seeding (delayed by cold weather) to putting up another hoophouse.

Volz spent his early childhood years in Cazenovia and moved to suburban Philadelphia with his family at age 10. He studied philosophy at Middlebury College in Vermont, and got his introduction to diversified farming as a part-timer at Essex Farm, a year-round, full-diet, horse-powered farm in Northern New York. The farm was founded by Mark and Kristin Kimball in 2003 and made famous by Kristin Kimball in her memoir, The Dirty Life, which chronicles the farm’s first year.

Following graduation from Middlebury in 2007, Volz worked at Essex Farm for two more years and at a couple farms in Vermont before beginning to search for his own farm. The search took him back to Cazenovia and to his roots. In spring 2010, he was introduced to Kaye Osborne, whose family has farmed on the land (270 acres) for more than a century. She needed someone to manage the property and he needed a place to farm. Greyrock was established in 2010.

“I was lucky to find Kaye and find this place,” Volz says. “They took really good care of the land and the buildings.” 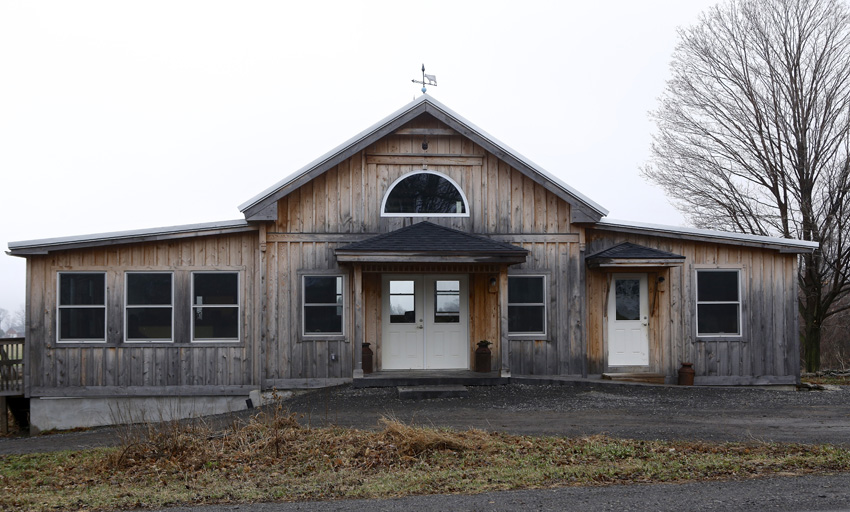 Greyrock was established in 2010.

Why farming as a profession?

“I wanted to do something meaningful and relevant and necessary,” Volz says. “Farming fit that. Everybody needs to eat. That made farming even more meaningful for me.”

Breaking from the CSA Model

If “know your farm/farmer, know your food” is your mantra and eating seasonally is a priority, Greyrock Farm should be on your radar — and in your GPS.

Greyrock takes the opposite approach of today’s large and industrial farms by focusing on smaller-scale production, people power and low-tech equipment. Transparency is important to Volz: He invites people considering CSA membership to visit the farm, chat with the workers and meet the animals. 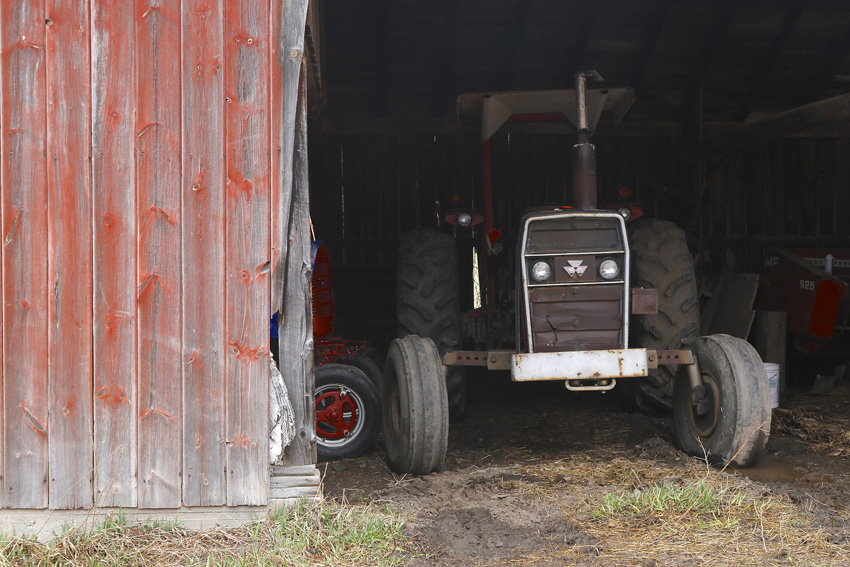 CSA pickup days and the Tuesday and Friday farmstands, open to the public, feature a host of bonus local and regional products to supplement the “full diet,” including grains, dried beans and flours from Gianforte Farm, meadow butter from Kriemhild Dairy Farms, tilapia from Main Street Farms, cheese and yogurt from North Country Creamery, and honey and maple syrup from Local Roots Farm. The list goes on.

Some folks travel miles for the raw milk, which is thick, creamy and flavorful, with grassy notes in the spring and summer. In New York state, raw, unpasteurized milk can only be sold at the place of production.

It’s spring on the calendar, and Greyrock is in a sort of transition season. Snow is melting and rain is falling, leaving mud, soggy fields and flashes of green. It will be a few weeks before the pasture is ready to receive cows, pigs and chickens for rotational grazing. But after a long, harsh winter, the new season is coming together and there is hope and anticipation in the air. 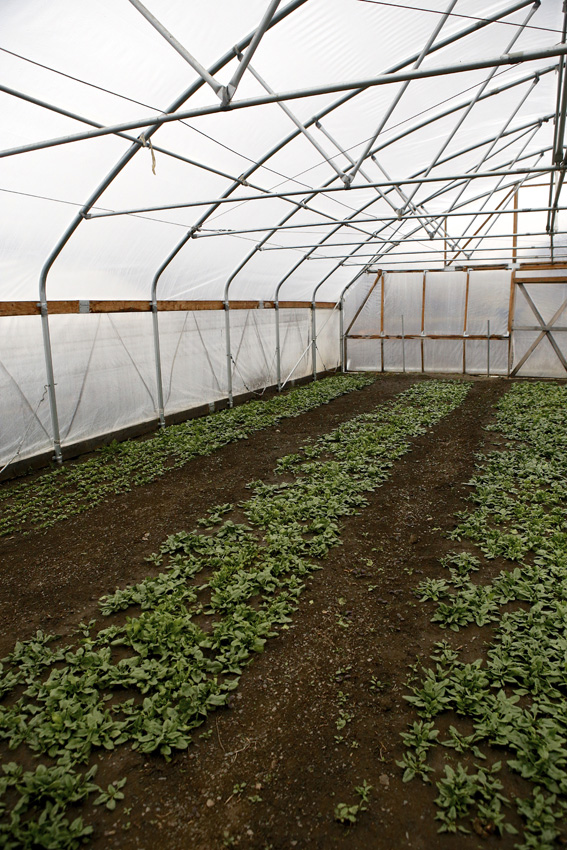 Spinach and arugula, planted in the fall, will soon be harvested from a hoophouse.
Michael Davis Photo | Syracuse New Times

Spinach and arugula, planted in the fall, will soon be harvested from a hoophouse — an unheated greenhouse, covered with strong plastic sheeting, that lets the sun in, retains heat and extends the growing season. A second hoophouse is being set up to use as a brooder for 500 broiler chickens, arriving at the farm as baby chicks.

Seeding has started. Customers have requested that cardoons, broccoli rabe, bok choy and fingerling potatoes, as well as more cauliflower and more greens, be added to the mix this year, Goldberg said in February.

This season, Greyrock is going from a free-choice, “take as much as your family will eat” CSA share plan to a more flexible program that functions like a store account. CSA members are asked to put down a minimum deposit of $500 and come to the farm to “shop” on pickup days. Produce is weighed at “checkout,” and accounts are paid down and recharged again, as needed. CSA members get a 15 percent discount on their bill.

“People are used to the grocery store and to shopping,” Volz says. “This way they can get more one week if they need it and less another week, depending on what they need and if they’re going away. We hope this makes things easier for people.”

CSA memberships are still available. Making a commitment in advance and specifying things you are likely to pick up each visit helps Volz and his crew know things like how much to plant and how much milk to have on hand in the cooler. 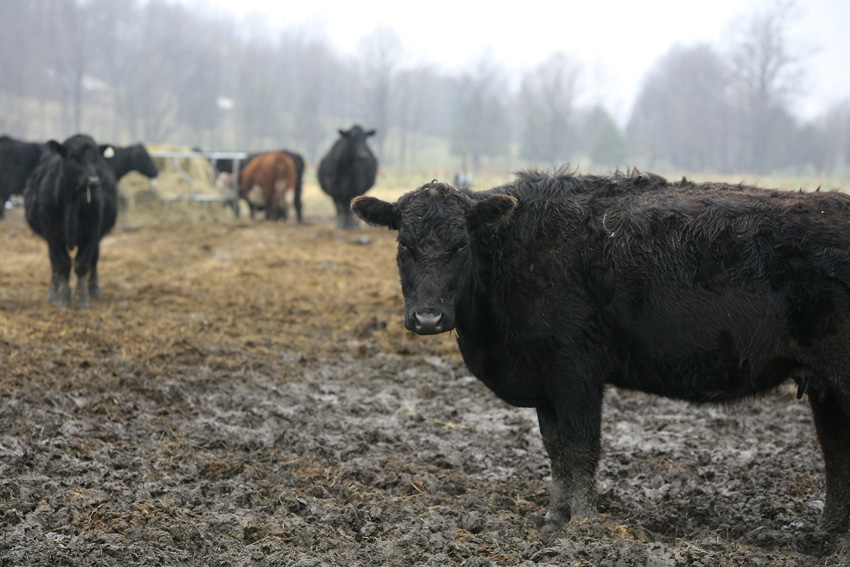 Making a commitment in advance and specifying things you are likely to pick up each visit helps Volz and his crew know things like how much to plant and how much milk to have on hand in the cooler.
Michael Davis Photo | Syracuse New Times

Greyrock stays in touch with its CSA members, farmstand customers and even potential new customers via a regular electronic newsletter and regular updates on its Facebook page. Who doesn’t “like” a picture of a baby calf getting a bottle or of a magnificent pair of horses pulling hay through the snow?

“Facebook is huge for us,” Volz says. “People really respond to it. We like for people to see our animals. People like knowing where their food is coming from.”

Emily Veator, of Auburn, learned about Greyrock Farm when she and her boyfriend went online to seek out a source for local raw milk to use for making fresh mozzarella cheese. “The milk is so tasty, so creamy and awesome,” Veator says.

While there, she says, she picked up some snap peas and greens. Veator, who is a vegetarian, says she regularly goes to the Central New York Regional Market for produce. But now that she’s moving from Auburn to Pompey, Greyrock and its “fresh goodness” will be in easier reach. 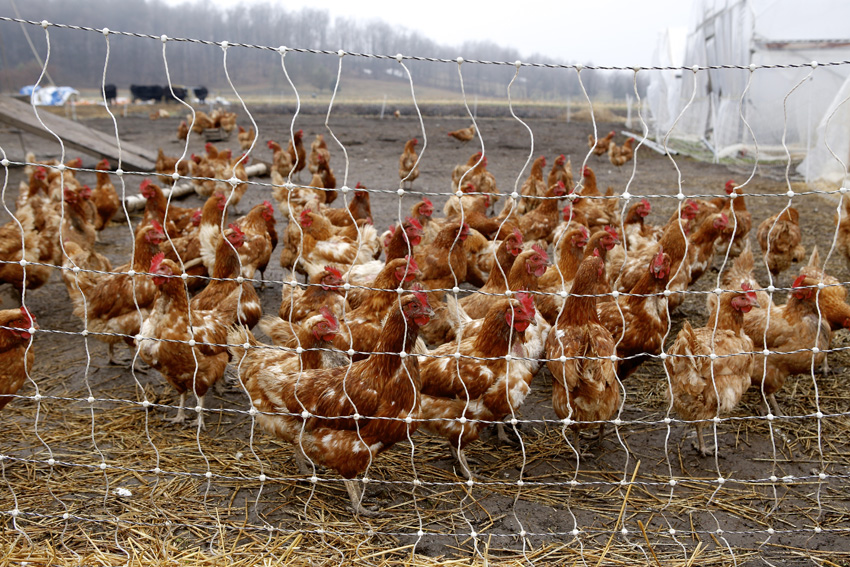 Looking to the Future

In addition to a daily to-do list, Volz has a more “abstract” list of goals. He wants to produce enough food for sale and for use on the farm. He wants the farm to be efficient and grow — in increments and not too much. He wants to make sure he and Gillian and other staff members are paid a living wage — salary and benefits — and he wants his staff to have a proper balance of work and life. 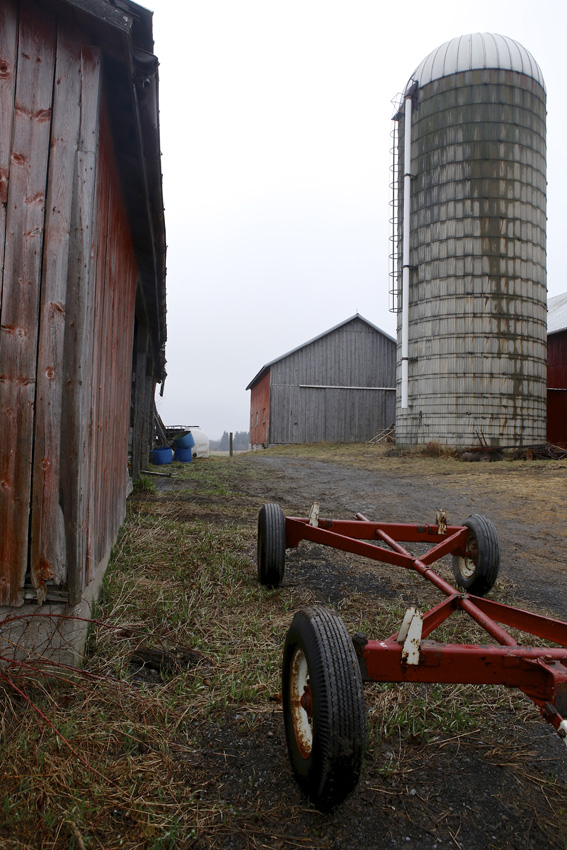 “I want us to be a fixture in this community and to bring people together,” Volz says.
Michael Davis Photo | Syracuse New Times

He wants to buy the farm this year or next year. “That’s a big goal,” Volz says.

He wants Greyrock Farm to be a go-to spot, both for sustenance and social interaction and connections. “I want us to be a fixture in this community and to bring people together,” Volz says.

Greyrock Farm is at 6100 East Lake Road, Cazenovia. Farmstand hours are Fridays, 2 to 6 p.m., and are open to the public. For more information about the 2015-2016 CSA program, call Matt Volz at (484) 888-6254, email [email protected] or visit http://www.greyrockfarmcsa.com/ or https://www.facebook.com/GreyrockFarmCSA. Volunteers are welcome and invited to contact Volz.

By the Numbers: Greyrock Farm 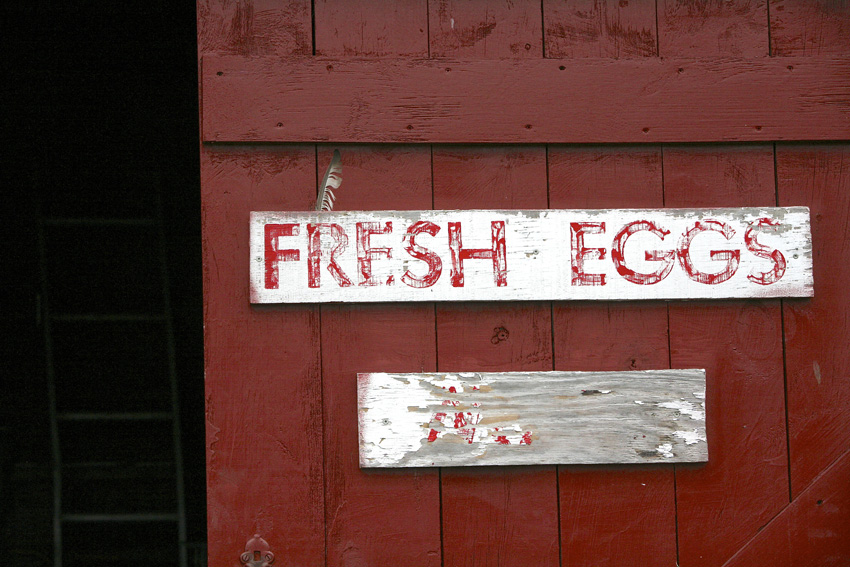 CSA members purchase a “share” of produce from a local farmer in advance of the growing season to enjoy each week of the growing season, usually June to November. Shares typically include eight to 10 kinds of vegetables, enough for a family of three or four. Some farms offer half shares, and some offer the option of adding fruit, eggs, meat to your order. 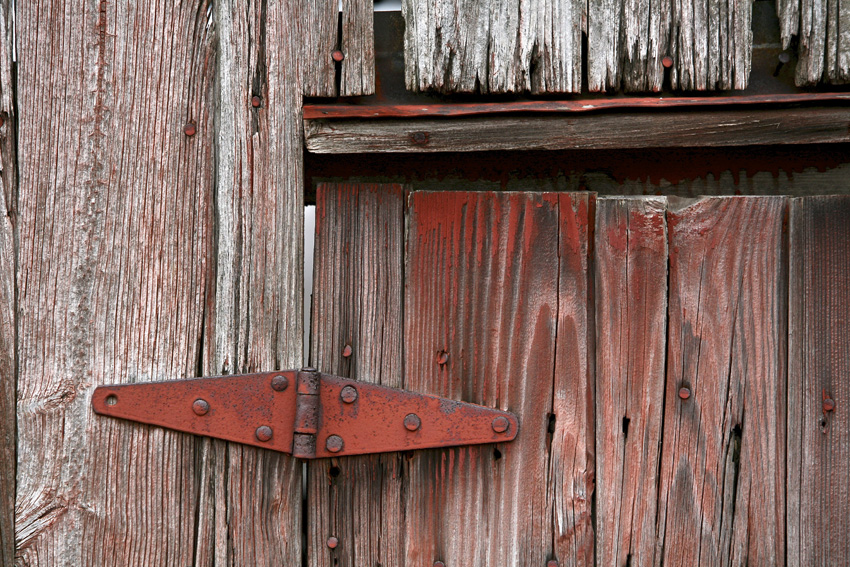 Margaret McCormick is a freelance writer and editor in Syracuse. She blogs about food at eatfirst.typepad.com. 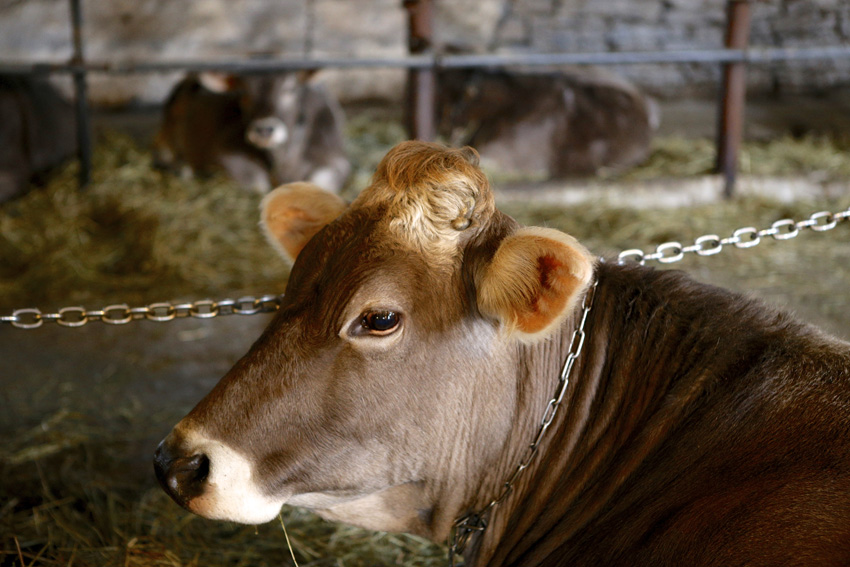 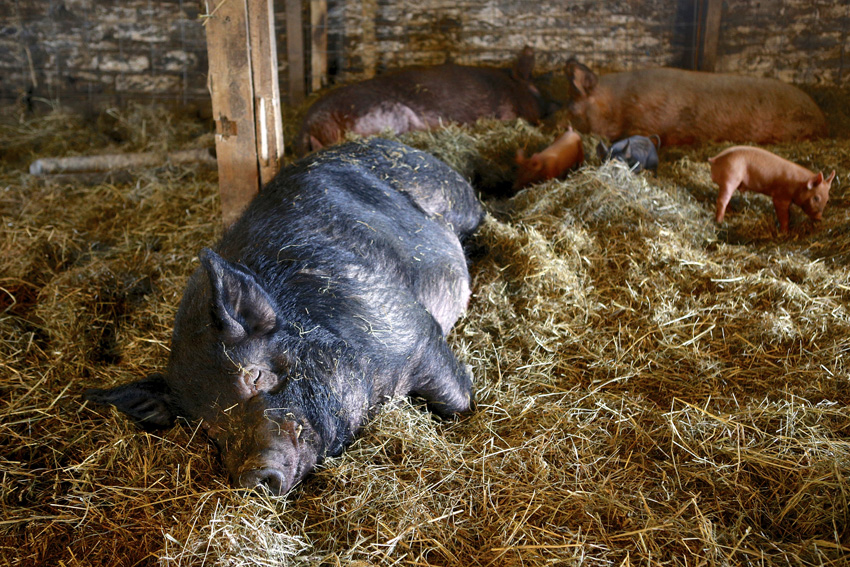 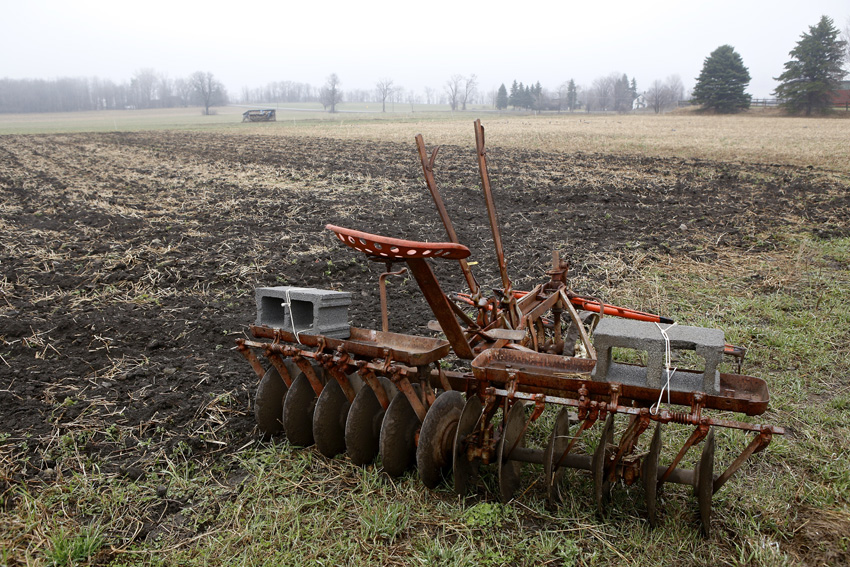 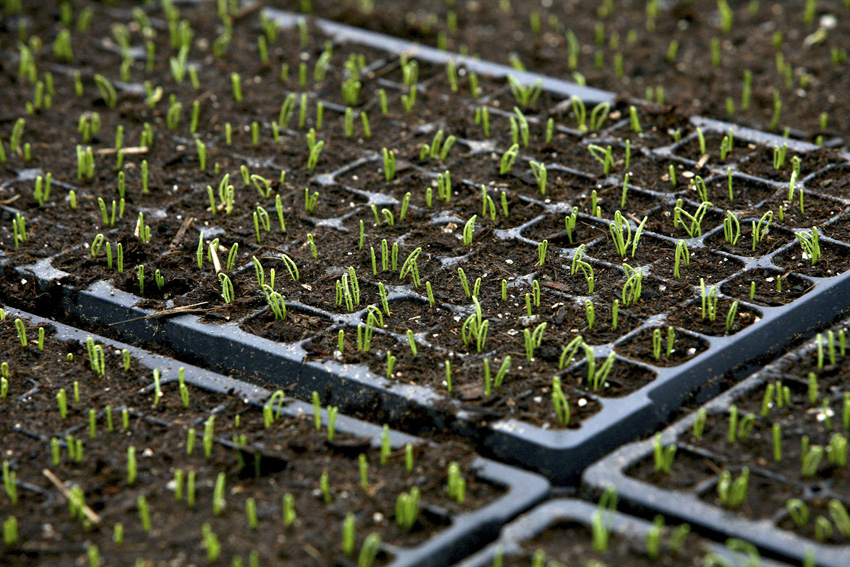 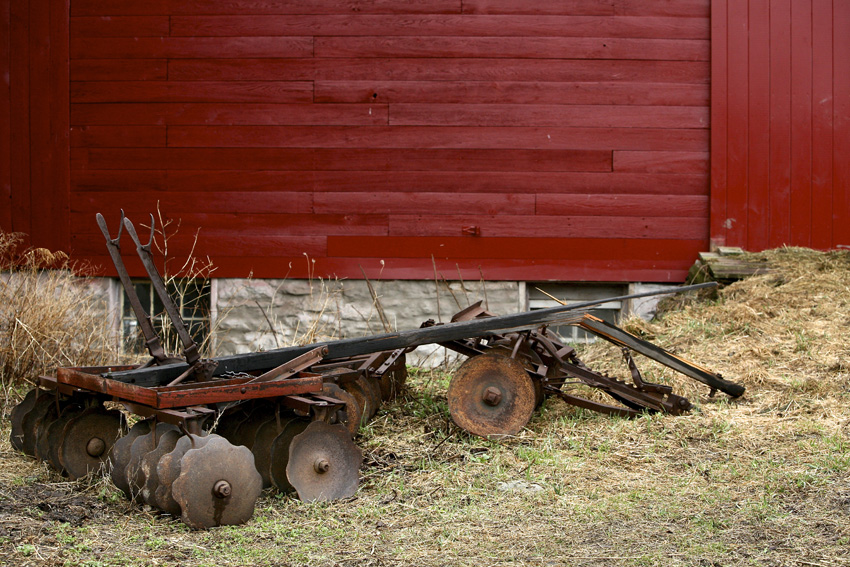 Board of Elections Seeks Inspectors
News and Blues
To Top