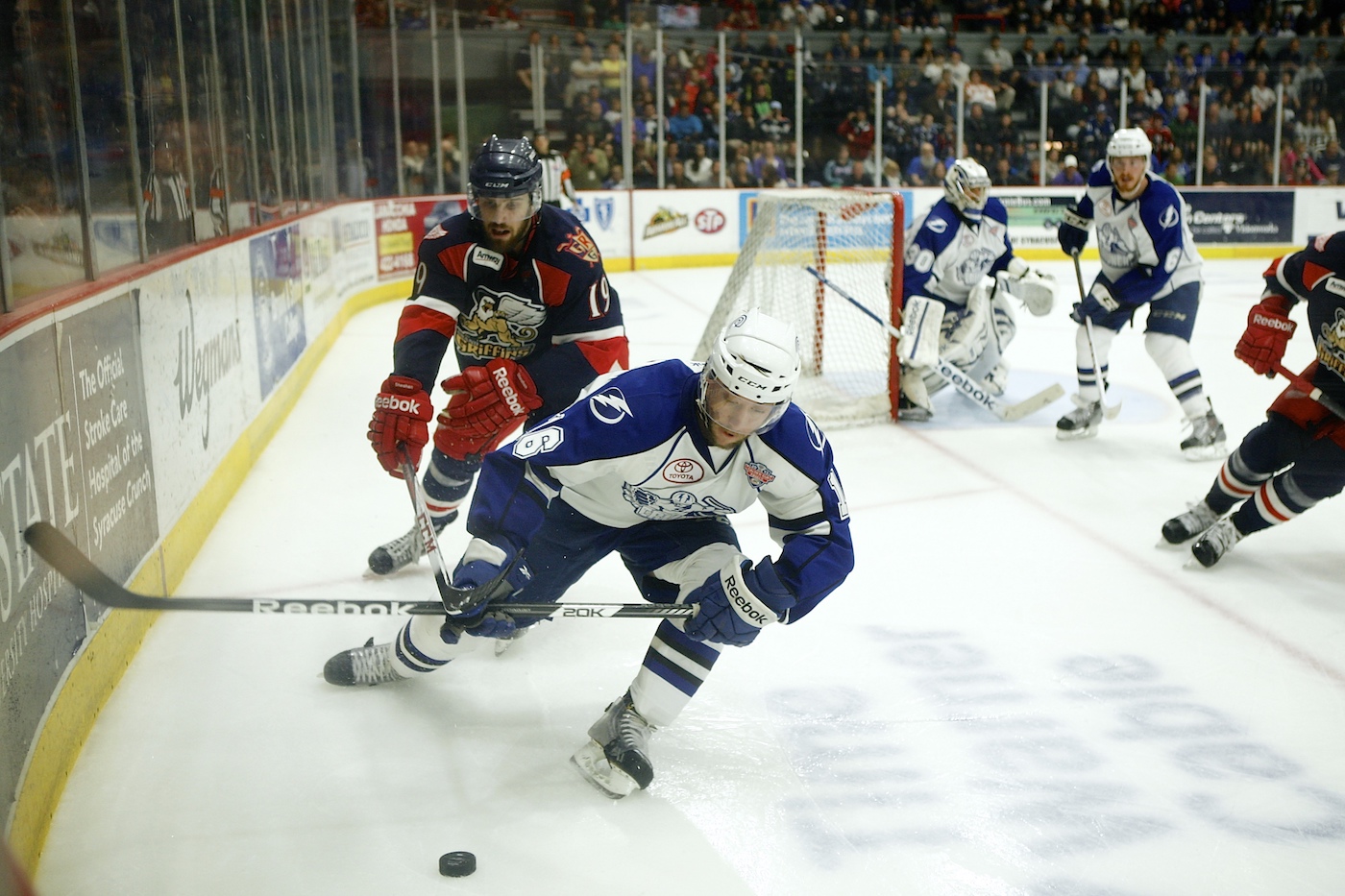 The Syracuse Crunch hockey team will continue its quest for its first Calder Cup championship this weekend, when the Crunch hosts the Toronto Marlies in the first two games of the American Hockey League North Division final playoff series.

The Crunch, the AHL affiliate of the Tampa Bay Lightning, advanced to the division final by defeating the St. John’s IceCaps 3-1 in the best-of-five North Division semifinal series. In the decisive fourth game April 28, Syracuse’s Gabriel Dumont scored the game-winner in overtime — his first goal since Dec. 30 — and goaltender Mike McKenna recorded 26 saves for his third win in the playoffs.

Syracuse, the North Division champions with 90 points, will host the Marlies on Friday, May 5, and Saturday, May 6, 7 p.m., at the Onondaga County War Memorial Arena. The middle three games will be played in Toronto May 9, 10 and 13, with the final two games, if necessary, May 15 and 17 in Syracuse.

The Marlies finished second in the North Division, just one point behind Syracuse. If the Crunch wins this series it will advance to the Eastern Conference finals — one step away from the Calder Cup finals.

The Crunch, which re-entered the AHL in 1994, has never won the Calder Cup, the AHL’s version of the Stanley Cup. The Crunch reached the Calder Cup finals in 2013 but lost in six games to Grand Rapids.

Single-game tickets for the playoffs can be purchased in person at the Crunch office located inside the War Memorial Arena, 800 S. State St., by calling the office at (315) 473-4444, or through Ticketmaster.

The No. 1 Syracuse men’s lacrosse team nearly overcame a nine-goal halftime deficit to No. 18 North Carolina April 28 before falling 16-15 to the defending national champions in the ACC Tournament semifinals on the Tar Heels’ home field in Durham, N.C.

The Orange is 11-2, with 10 of its 13 games decided by one goal and three of its wins in overtime. Syracuse will conclude its regular season Saturday, May 6, by facing Colgate (5-8) in Hamilton.

The Orange remains a lock for a NCAA Tournament bid and will likely host a first-round game at the Carrier Dome.

The 10th-ranked Syracuse women’s lacrosse team reached the ACC Tournament championship game before losing 18-11 to No. 3 North Carolina April 30 in Richmond, Va. The Orange (15-6) will learn its fate in the NCAA Tournament when the bracket is announced Sunday, May 7.